Evan Thomas still thinks B. Hussein is ‘sort of god‘.

There’s been a long-standing narrative that the mainstream media envision B. Hussein Obama as Christ reincarnate. Newsweek – which was sold and bought for a dollar, just deified him again.

Ed Driscoll points out the similarity to Muggeridge’s Law:

These pictures are from actual posters and magazine covers during the 2008 campaign: 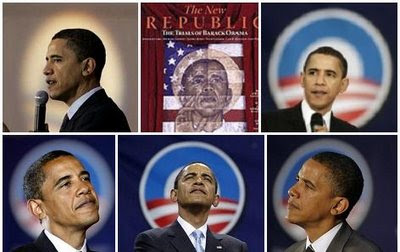 This is a Christ-like tribute to Obama by artist Michael D’Antuono called “The Truth”: 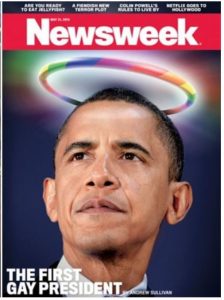 Lest you think the Second Coming of Christ schtick ran its course, think again.

Many of them still think the SCOAMF is Christ reincarnate.

A Florida A&M University ‘professor’ Barbara A. Thompson, has written a book titled: “The Gospel According to Apostle Barack: In Search of a More Perfect Political Union as ‘Heaven Here on Earth.”  According to Thompson, she was given this message in her dreams.

Jamie Fox called Obama “our lord and savior” during a promo for the Soul Train Awards on BET.

The unhinged freaks on the Left reinstalled a socialist empty suit into the world’s most powerful position. They voted for messianic idolatry and pigment over substance.  And they wonder why they get smacked around with criticism and satire.

Record unemployment, a failed domestic and foreign policy, unprecedented corruption, and there are still idiots who worship this assclown.

This sickening infatuation will keep going until the waste of a zygote is finally out of office, or impeached, whichever comes first.

In the meantime, God help us.

1 thought on “Newsweek’s Homage to the Obamessiah”