Shannon Brandt, the man who is accused of fatally hitting Cayler Ellingson with an SUV, has been charged with murder in the death of the 18-year-old, and new information alleges that the teenager was run over by an SUV.

Brandt, 41, was initially arrested after police say that he fatally hit Ellingson with an SUV during the early morning hours of Sept. 18 after a street dance that took place at a local bar in McHenry, North Dakota. Court documents state that Brandt initially fled the scene and told a 911 operator that Ellingson was part of a “Republican extremist group,” adding that the teenager was calling on others to come “get him.”

He was released from jail on Sept. 20 after posting a $50,000 bond, and while he was not placed on house arrest or curfew, he could not leave North Dakota or drink.

Ellingson was taken to a local hospital after the incident, but later died.

North Dakota Highway Patrol Capt. Bryan Niewind told Fox News Digital that there was “no evidence” suggesting that the teenager was part of a “Republican extremist group” or that the incident involved politics.

Foster County State’s Attorney Kara Brinster announced Friday that Brandt is being charged with murder in addition to duty in an accident involving death. Brinster said that the charge of criminal vehicular homicide has been dismissed because of the new murder charge.

Brandt turned himself in on Friday at the Stutsman County Correction Center. The new charges are the result of an investigation by the North Dakota Highway Patrol, Foster County Sheriff’s Department and the North Dakota Bureau of Criminal Investigation.

A probable cause affidavit for the new charges states that Brandt asked the 911 operator if he was going to prison.

“I just wanna ask you a question, am I going to prison?,” Brandt asked the 911 operator, according to the document.

During the 911 call, Brandt “made comments regarding the incident being intentional and not an accident,” according to the affidavit.

According to the affidavit, when the 911 operator asked “he wouldn’t let your vehicle go then what happened,” and Brandt responded “yes I…I just tried to take of en , he..he wasn’t going to let me go, I I hit him I didn’t mean to and and he’s subdued I was scared to death but he’s subdued, he can’t do anything to me now so, so this is why I’m calling you.”

“I mean I…I almost oh god, I almost just runaway but I thought jeez obviously if it was a total accident I wouldn’t be scared but I know it was more than that,” Brandt said, according to the affidavit.

……During a court hearing on Sept. 19, Brandt disagreed with the proposed bail amount, stating that he is not a flight risk and has a life that he needs to get back to.

“I have a job, a life and a house and things that I don’t exactly want to see go by the wayside — family that are very important to me,” Brandt said.

A funeral for Ellingson was held on Monday.

This piece of shit had the gall to complain about his job, life, home, and his family, just hours after he killed a kid that he claimed was a “Republican extremist”. 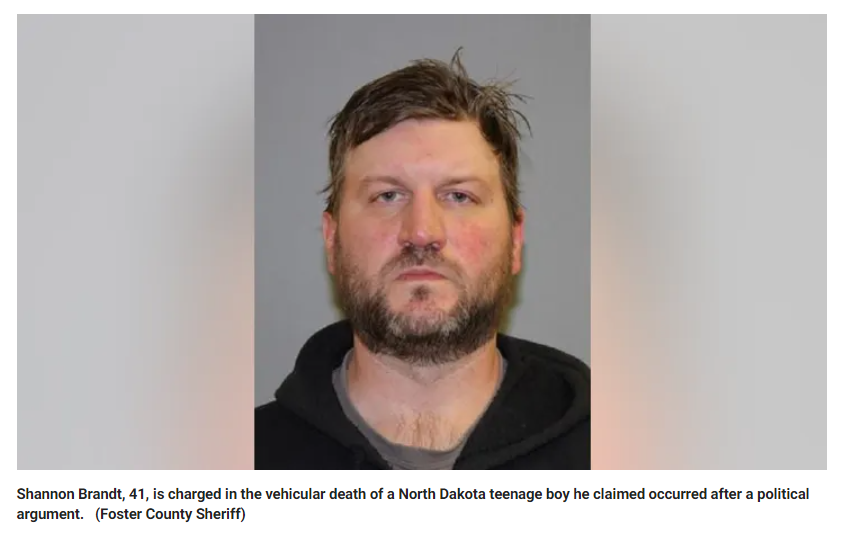 North Dakota has the death penalty.  Brandt should be run over with his own SUV.

This shitbag took Biden’s  “MAGA Republican extremists” rhetoric to heart, and now an innocent 18 year old kid has been murdered because of it. I’m sure this makes him very happy.