Democrat mayors in New York City and Washington, DC, are complaining about busloads of border crossers and illegal aliens arriving in their cities even though they have voiced support for illegal immigration in the past.

“In some instances, families are arriving on buses sent by the Texas and Arizona governments, while in other cases, it appears that individuals are being sent by the federal government,” Adams said in a statement to local media.

Yet Adams has previously backed policies that promote illegal immigration. While running for mayor, he touted his support for keeping New York City a sanctuary city for criminal illegal aliens. 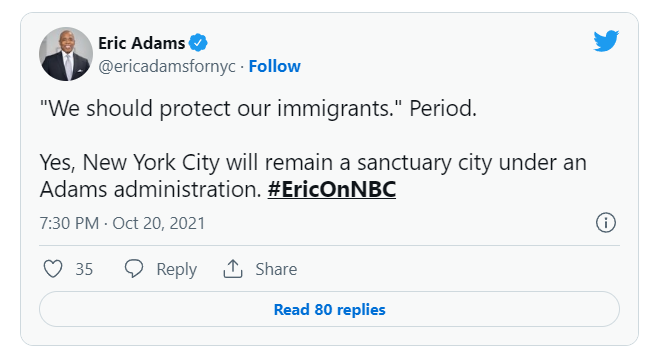 “This is a very significant issue. We have, for sure, called on the federal government to work across state lines to prevent people from really being tricked into getting on buses.

Local taxpayers are not picking up the tab and should not pick up the tab. [Emphasis added]”

Bowser, like Adams in New York, has a history of promoting illegal immigration in Washington, DC. In 2016, Bowser reinforced that the nation’s capital is a sanctuary city for criminal illegal aliens.

“We celebrate our diversity and respect all D.C. residents no matter their immigration status,” Bowser said at the time. “We are a sanctuary city because we know that our neighborhoods are safer and stronger when no one is afraid to call on our government for help, and when our police can focus on protecting and serving.”

The complaints come as American communities all over the country have been forced to deal with a booming wave of illegal immigration and President Joe Biden’s administration works directly with non-governmental organizations (NGOs) to bus and fly border crossers and illegal aliens into the United States interior.

From February 2021 to May 2022, Biden has released more than a million border crossers and illegal aliens into American communities — with no end in sight.

Bowser wants National Guard troops to help with the illegals. She’s the same scrunt who didn’t want the National Guard deployed to her city to quell the Dem-inspired violence during the Floyd riots, who said they should be ‘vetted’ for their political viewpoints, and kicked 200 of them out of hotels and made them sleep in cold parking garages.

She had no issues when BLM and Antifa were destroying D.C.

Shipping illegals to Dem-controlled towns is brilliant. Since the Dems are always bragging about the adoration they have for illegals, then they can have as many as their bleeding hearts desire, right in their own fucking back yards.

Dems were all for enforcing the immigration laws until illegals became political tools.  Now they ignore the laws and simply tell foreign nationals to come right in as if that justifies the crime.

The U.S. has the right to control who enters the country. There is no Constitutional or legal right for a foreigner to enter the U.S.  It’s a privilege.

The Dems’ sole purpose of this sanctioned invasion is to change the fabric of the country in a very insidious way. Biden’s goal is to pollute America with a new population of pliable serfs and dilute the influence of American citizens.

It’s time to send the illegal vermin into the wealthy liberals’ neighborhoods by the busloads.