Looks like Michael Leroy Byrd wasn’t the only capitol cop who committed murder on 6 January.

The family of Rosanne Boyland, one of two female Trump supporters who died at the Capitol on January 6, just announced they have hired a lawyer to investigate the suspicious circumstances of her untimely death. Boyland, 34, traveled with her friend Justin Winchell from Georgia to Washington to hear President Trump’s speech.

The pair then walked from the Ellipse to Capitol Hill; a photo published in a local Georgia newspaper shows Boyland smiling, wearing Old Glory sunglasses and carrying a “Don’t Tread on Me” flag that day.

A few hours later, she was dead.

Aside from the unlikelihood Boyland overdosed on her daily medicine while actively participating in a day-long political rally, recently released footage and firsthand accounts contradict the coroner’s report. “There are still many questions about exactly what happened to her,” Rosanne’s aunt, Cheryl Boyland, wrote in a GiveSendGo post.

“Videos show her being beaten by a female officer after being crushed by protesters pushed by police.  Yet the D.C. Medical Examiner said Rosanne’s body showed no signs of trauma, and attributed her death to the prescription medication she took every day for years. According to videos and statements, Rosanne was dragged unconscious through the west tunnel by the police at 4:31 PM.  Then she was taken to the crypt and to the House Majority Leader’s office before EMTs arrived at 5:45 PM, finding her inside the rotunda being given CPR by Capitol police.

Further, both the Medical Examiner’s office and D.C. Metropolitan Police Department continue to refuse to release pertinent information related to her death. Boyland’s mother told the Gateway Pundit that the coroner is withholding her full autopsy report; D.C. police have denied numerous requests for body-worn camera footage, claiming the recordings are part of an “ongoing investigation and criminal proceeding.”

As I reported last week, a new court filing details a shocking account of police brutality inside the lower west terrace tunnel on January 6 where Boyland died. Dozens of police officers clad in full riot gear were stationed there, ostensibly to stop protesters from entering the building. But emerging evidence suggests a more nefarious purpose—officers used the tunnel as a bunker of sorts to launch a gruesome offensive against American citizens on federal property.

In any other situation, the behavior of law enforcement throughout that afternoon, which is now documented, would result in nonstop news coverage, protests, and demands for criminal investigations. Since the victims are Trump supporters, or at least people who protested the unlawful election of Joe Biden, the misconduct instead is buried by the media and covered up by Nancy Pelosi’s January 6 select committee.

For months, the Justice Department has kept under seal at least 14,000 hours of surveillance video captured by Capitol security cameras on January 6. Merrick Garland’s office successfully argued in court that the recordings are “highly sensitive” government material and every clip used as evidence in Capitol cases is concealed by a protective order. Discovery has been intentionally delayed to prevent defendants and their lawyers from seeing the secret footage.

Time, however, is running out for Garland’s prosecutors. Joseph McBride, the attorney representing defendant Ryan Nichols, recently viewed three hours of surveillance video recorded by security cameras inside the tunnel. What McBride describes in his filing based on that footage is a sustained and brutal assault by police officers against Capitol protesters, something his client, a Marine and longtime rescue volunteer, attempted to stop.

One officer in particular, a D.C. Metro police supervisor referred to as “white shirt” in McBride’s motion, repeatedly beat protesters with a baton and his fist. “White-shirt beats the woman with his baton striking her eight times in six seconds,” the footage video shows, according to McBride. “White-shirt punches the woman in the face, with his left-hand, landing five punches in five seconds, with all of his might. Another officer joins in and starts beating the woman in the head with his baton, landing twelve strikes in seven seconds.” (It does not appear that the woman in this account is Rosanne Boyland.)

“The supervisor (we call him “white shirt”) takes his baton and starts spearing the woman in the eye with it,” Geyer wrote on Twitter. “Jamming her with full force in the face. She turns her head and he jams the back of her head and ear. He then is punching her in the face. She is literally being beaten in a sick, sadistic manner that frankly shocked me as someone who was in [law enforcement] for 21 years.”

(Both Harrelson and Nichols are incarcerated in the D.C. jail under pretrial detention orders)

Outside the tunnel, around the same time, Boyland’s lifeless body was lying on the ground while her friend screamed for help. “She’s dead! She’s dead!” Winchell cried. McBride explains what happened next. “Roseanne (sic) Boyland’s body is dragged into the tunnel at 4:30 p.m., and is never seen again.”

Her body, however, was seen after that point by at least two men: Capitol police officers Aquilino Gonell and Harry Dunn.

……Gonell largely ignored his own role in the violence, only briefly explaining that he kicked and punched “rioters” including hitting one with his baton; Gonell admitted he was at the front of the tunnel for most of the afternoon.

He then offered just one sentence on what he did with Boyland’s body: “[It] was not until around 4:26 pm, after giving CPR to one of the rioters who breached the Capitol in an effort to save her life, that I finally had a chance to let my own family know that I was alive.”

After dragging Boyland’s body through the tunnel, Gonell met up with Officer Dunn. “In the Crypt, I encountered Sergeant Gonell, who was giving assistance to an unconscious woman who had been in the crowd of rioters on the west side of the Capitol. I helped to carry her to the House Majority Leader’s office, where she was administered CPR,” Dunn testified in July.

Paramedics arrived and took Boyland to a local hospital. She was pronounced dead shortly after 6 p.m.

Despite their alarming testimony, no one on the January 6 committee bothered to ask either officer who the woman was or what happened to her. Neither Liz Cheney (R-Wyo.) nor Adam Kinzinger (R-Ill.) nor Adam Schiff (D-Calif.), the alleged January 6 “truth seekers,” asked Gonell or Dunn how the woman ended up in Steny Hoyer’s office. Or whether she was already dead as they vainly attempted CPR.

To the contrary—the choice by the committee to first feature at least two officers involved in what increasingly appears to be a cover-up of the violent death of a second female Trump supporter at the hands of police on January 6 was an effort to canonize Gonell and Dunn and shield them from any media or legislative scrutiny.

Congressional Republicans, at least the handful who care about really getting to the truth about January 6, have no legislative power for now. But they can, and must, raise public awareness related to police brutality against Trump supporters on Capitol grounds on January 6. The American people, and Boyland’s family, deserve the truth—not more stonewalling and cover-ups by House Democrats, the D.C. coroner, and the D.C.-based police departments.

These are the two thugs involved in Rosanne Boyland’s death: 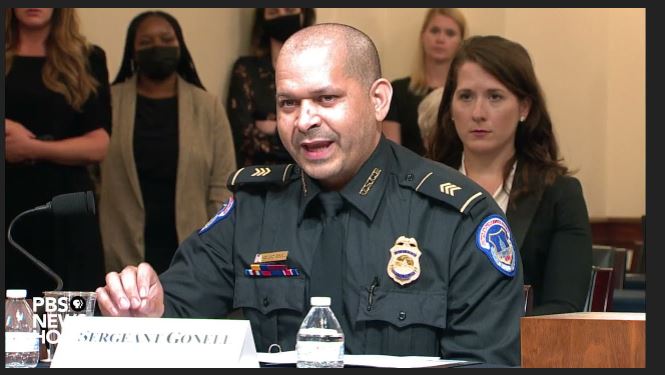 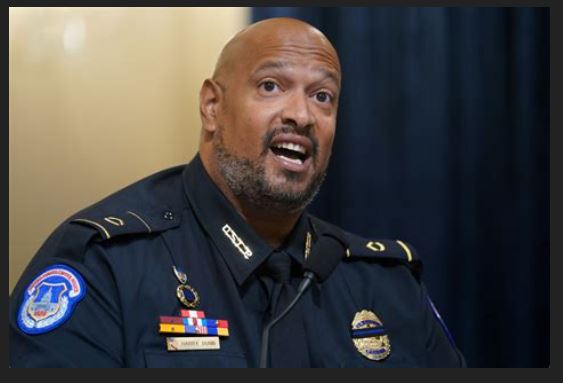 An eyewitness reported the behavior of the capitol cops was pretty nasty.

When capitol cop Brian Sicknick died from a stroke hours after the protest, the media perpetuated the myth that he was “struck by a fire extinguisher” and the The Federal Bureau of Incompetence refused to disclose the actual cause of death because it didn’t serve the agenda.

I hope the Boyland family is able to get some justice. The best course of action is to publicize this and light a fire under the asses of the GOP too do something about it.