“To be true to the resolution to myself: this is my last tweet. [O]ther than to read news, [I won’t] be on [T]witter,” Gutfeld first tweeted on Jan. 2. Offering the link to his own website, Gutfeld continued, “[Y]ou’re all invited there; just leave the bullshit behind. Tata.” 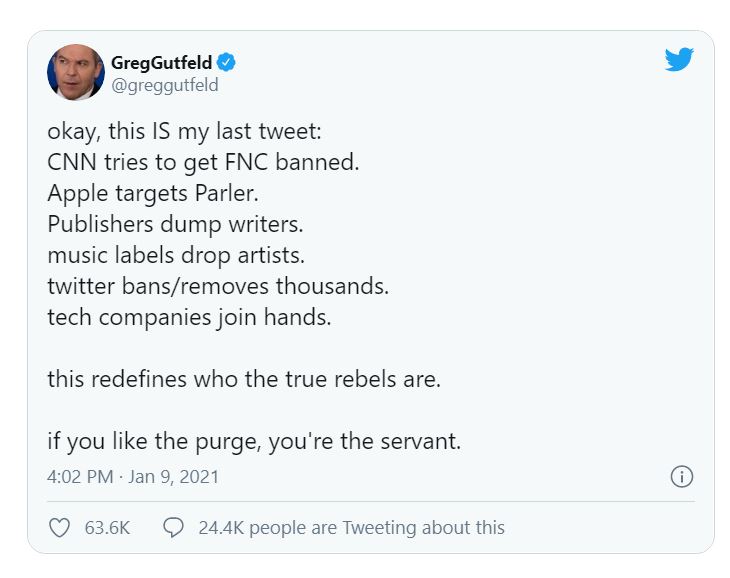 “Fox & Friends” co-host Pete Hegseth on Saturday described it as “something of a purge” that might have taken place, as thousands of users disappeared from the platform. Hegseth also suggested that the move might have come after the Georgia Senate runoff results earlier this week, not just after Trump’s account was permanently suspended.

The exact reason for the shift in users is not known, but it could be that users have voluntarily left the platform along with the president. Fox News reached out to Twitter for comment on the drop in users and was referred to their support page. A follow-up request was not yet returned.

Gutfeld follows in the footsteps of fellow Fox hosts Lou Dobbs and Mark Levin, both of whom left Twitter following the company’s muzzling of the president.

I don’t believe any American should ever tolerate those who deny us freedom of speech or who would ever be so arrogant as to censor our President. I’m withdrawing from Twitter as of right now. Please join me on Parler @LouDobbsTonight. God bless you and America. 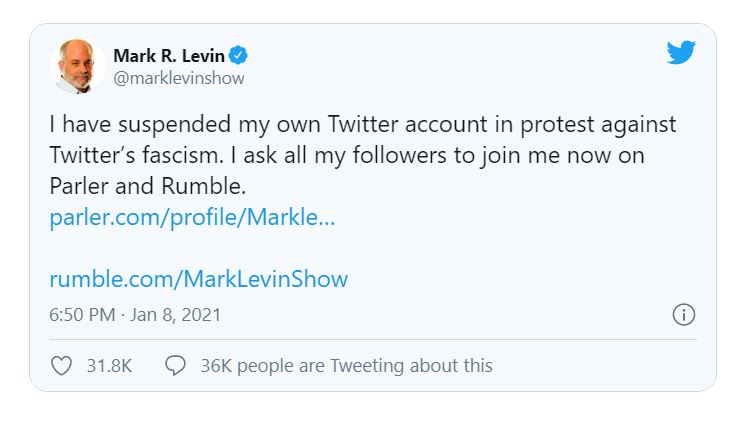 The anti-free speech nazis at Twitter insisted that conservatives suddenly losing thousands of followers is “routine”.

If you value free speech, get on Gab and Parler.  Ditch Twitter and Facebook. Eventually, they will collapse under the weight of their own fascism.