No, not the treasury.  Shore Bank in Chicago.

A hearty group of patriots attended a Tea Party protest last Wednesday afternoon outside the downtown Chicago offices of ShoreBank, the only one of 72 failed banks to receive a bailout since New Year’s Day.

Why were they so lucky? Because Shore Bank “plays the game” with big Democratic politicians: the Chicago Way, the Al Capone Way….it won the Democratic lottery. That is why I dressed as “Scarface Al” for the event and positioned myself at ShoreBank’s front door. 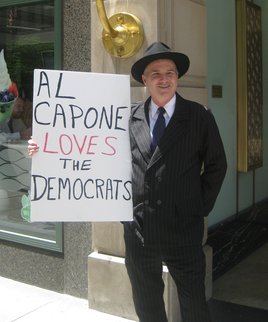 “Rep. Schakowsky had a conflict of interest, since Shore Bank may have saved her husband some prison time in the 1990s by allowing him to pay back money from a check kiting scheme for which he was later convicted in 2006,” Pollak said. “She also encouraged the public to invest in ShoreBank in January 2010, Pollak added, “when she knew the bank was in trouble. She should never have involved herself in the bailout effort.”

The Reverend Isaac Hayes, the Republican nominee in the 2nd congressional district who faces Jesse Jackson Jr. this fall, also spoke. He told us that Communist radical Van Jones, who was forced to resign his Green Jobs Czar post with the Obama administration after he was outed as a 9/11 conspiracy nut, is a Shore Bank customer. Jones, according to a Shore Bank blog, is someone who shares the values of the bank and believes “in our mission (and) whose own work is inspiring others.”

Shorebank’s boneheaded green investments are among the reasons it needed a bailout.

William J. Kelly, a former GOP candidate for state comptroller, added to the street theatre by walking into ShoreBank and demanding a $10 million line of credit. He didn’t get it. Kelly, an amiable gentleman, just doesn’t know the right people. Al Capone knows how things really get done in Chicago. So do the Democrats. But it sure gets expensive. Not for the politicians, mind you. Just for the taxpayers.
http://communities.washingtontimes.com/neighborhood/tea-party-report/2010/jun/14/round-ii-chicago-tea-partiers-disrupt-obamas-bank/?utm_source=newsletter&utm_medium=email&utm_campaign=newsletter_world-news

Government regulators had demanded earlier this year that the bank come up with $200 million in capital funds or it would be seized. Saved by the bell, it received $35 million in stimulus funds and another $75 million in funds from banks/financial companies that have also received federal bailout money like Bank of America, Goldman Sachs, and GE to name a few. Other banks like National Bank (with a strong record of investing in poor communities), Midwest, and Bank of Lincolnwood didn’t fair as well. Why? Because they didn’t have Shore Bank’s political connections. That’s why.

So politically connected is Shore Bank that Chicago politicians like Sen. Dick Durbin and Rep. Jan Schakowsky attempted the first-ever state bailout of a bank. Why would they do that? There are some serious questions about this that concern, in part, Rep. Schakowski’s husband Robert Creamer, who was convicted of bank fraud and tax evasion in 2006. Apparently, Shore Bank was a part of his check kiting scheme.  Rep. Schakowski has been very public in her attempts to raise cash for the struggling bank and avoid its seizure by federal regulators.

The whys here demand attention. Why is every powerful politician trying to save Shore Bank? It isn’t altruism – it’s more likely to be save-my-butt-ism. Chicago Tea Partiers are right to demand a full forensic audit of Shore Bank and I will be along side of them on Wednesday to do so.
http://communities.washingtontimes.com/neighborhood/tea-party-report/2010/jun/8/chicago-tea-partiers-protest-obamas-favorite-bank/?utm_source=newsletter&utm_medium=email&utm_campaign=newsletter_world-news

Some powerful Democratic politicians have money invested in Shore Bank and they’re not about to allow it to go tits up. Even if it means using taxpayer money (like they do for all their other special interests) to bail it out.

Al Capone would be jealous.