The New York Times often acts as the spin cycle for the Democrats’ dirty laundry. For years, Times reporters have helped get ahead of damning news, especially when it’s related to the Russian collusion hoax, in an attempt to establish the narrative early.

A recent example is the Times article downplaying the pending indictment against Michael Sussman, the Clinton campaign lawyer who acted in cahoots with the FBI to seed the collusion tale before the 2016 election. The article was published the day before Sussman pleaded guilty of lying to the FBI.

On Saturday, the Times published a carefully constructed bombshell intended to soften the blow of an explosive scandal in the making: the FBI had at least one informant among the group of Proud Boys who marched on the Capitol on January 6. The informant, according to “confidential documents” furnished to the paper, started working with the FBI in July 2020 and was in close contact with his FBI handler before, during, and after the Capitol protest.

“After meeting his fellow Proud Boys at the Washington Monument that morning, the informant described his path to the Capitol grounds where he saw barriers knocked down and Trump supporters streaming into the building, the records show,” reporters Alan Feuer and Adam Goldman (the Times reporter most responsible for priming the ground for news that was unfavorable to the Russia collusion narrative) wrote on September 25. “In a detailed account of his activities contained in the records, the informant, who was part of a group chat of other Proud Boys, described meeting up with scores of men from chapters around the country at 10 a.m. on Jan. 6 at the Washington Monument and eventually marching to the Capitol. He said that when he arrived, throngs of people were already streaming past the first barrier outside the building, which, he later learned, was taken down by one of his Proud Boy acquaintances and a young woman with him.”

In other words, one of the informant’s Proud Boy “acquaintances” was removing temporary barriers to allow a crowd to enter the restricted grounds around the building.

But there’s more to come, Feuer and Goldman warned. “The F.B.I. also had an additional informant with ties to another Proud Boys chapter that took part in the sacking of the Capitol,” they wrote. In a tweet linking to his article, Feuer admitted other FBI assets “may emerge, further complicating the picture of Proud Boys activity on Jan 6,” he posted.

……Since the summer of 2016, the Federal Bureau of Investigation has used every tool in its extensive and potent arsenal to target Donald Trump. This included the use of confidential informants, FISA warrants, leaks of classified information, and sketchy documents such as the Steele dossier produced by another FBI asset at the time, Christopher Steele.

……the FBI now is turning those weapons against Trump-supporting Americans.

“Surveillance footage shows a squad of people, dressed in all-black, systematically entering the Capitol and kicking open one of the exterior doors on the Senate side,” Carlson observed. “They appear to be well-trained and coordinated. They’re not high on hallucinogenic mushrooms. The question is, who are they? And why don’t we know their names? And why aren’t they dressed like any of the other people in the footage that’s just been released?”

“We still don’t know how many federal agents were involved in the events that day, but we have reason to believe from court documents that it’s a significant number. And here’s one clue: at a recent rally in Washington, the feds managed to arrest one of their own undercover agents,” he said. “How many undercover agents? There were so many feds at the event, that they lost track of each other, and arrested one of them. So we ask again: how many federal agents were there on Jan. 6? Why can’t we know?”

A photo from the  ‘Justice for J6’ rally on 18 September: 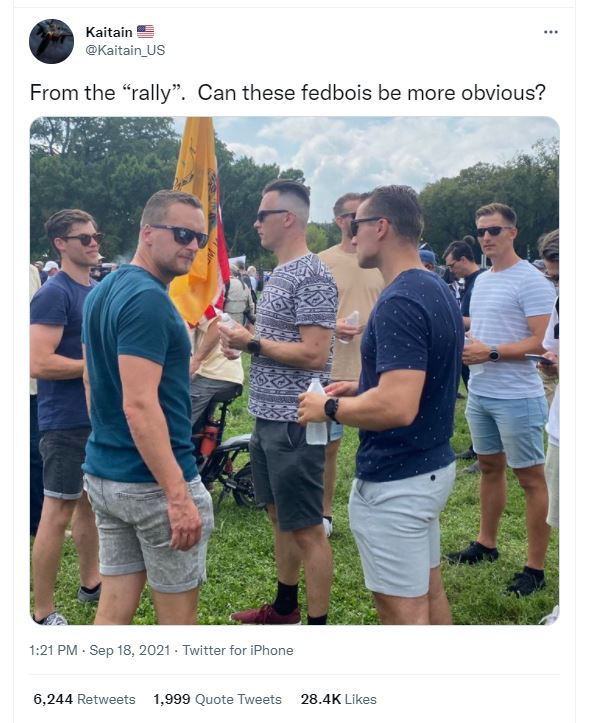 One of the undercover fedbois got arrested:

The FBI’s involvement in the Whitmer kidnap plot is just as despicable.

The FBI needs to be dismantled from the top down. The criminal malfeasants in the agency should be indicted and prosecuted. We know that won’t happen because agencies weaponized by Dem regimes trample all over the Constitution while Congress does nothing. All the hot air and indignation during oversight hearings are a dog and pony show.