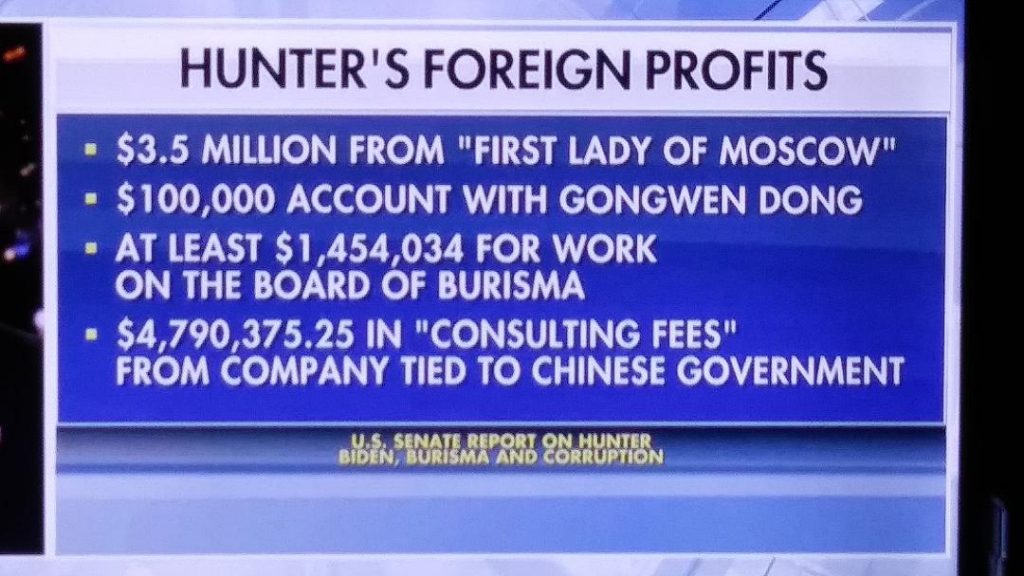 The transactions, uncovered in an investigation by the two senators, raise concerns about influence peddling by the Biden family and the potential for compromising the administration’s policies toward Beijing.

“Our challenge is that the deep state does not give up its secrets easily. New evidence of Biden family influence peddling is surfacing on a regular basis – often coming from records from Hunter Biden’s laptop,” said Mr. Johnson, a Wisconsin Republican and member of the Homeland Security and Governmental Affairs Committee.

……The senators uncovered records of three bank transfers that show a $1 million payment to Hunter Biden’s company from a Chinese company that was embroiled in a U.S. investigation of international bribery and money laundering.

The bank records trace the $1 million from the Chinese government-linked company CEFC China Energy to Hunter Biden’s company Hudson West III in November 2017 and then to Hunter Biden’s Owasco law firm in March 2018.

The records of the wire transfers indicate the payments were made to Hunter Biden’s firm for representing Patrick Ho Chi Ping, who was the head of CEFC at the time.

The original transfer of $1 million coincides with Mr. Ho’s arrest by U.S. authorities in November 2017 on international bribery and money laundering charges.

Sens. Chuck Grassley (R-IA) and Ron Johnson (R-WI) on Monday revealed a $100,000 direct payment from CEFC China Energy to Hunter Biden in 2004 when Joe Biden was the chairman of the Senate Foreign Relations Committee.

While Joe Biden was head of the powerful Senate committee, Grassley and Johnson allege Hunter was directly paid $100,000 via a wire transfer to Wells Fargo Clearing Services and designated “further credit to Owasco,” Hunter’s law firm.

The Chinese energy company, no longer in operation, was led by chairman and majority owner Ye Jianming.

……Grassley suggested the transactions could show “the extent to which President Biden might be — and almost certainly is — compromised” by Hunter Biden’s deep ties to a communist China entity.

“Bank records like this piece of evidence are pretty hard to deny and sweep under the rug. Our reports were chocked full of irrefutable evidence like this. And yet, the media buried those details in an attempt to keep it hidden from the American people,” Johnson added during his testimony.

“Hunter Biden and James Biden served as the perfect vehicle by which the communist Chinese government could gain in-roads here in the United States through CEFC and its affiliates,” Grassley continued. “And these in-roads were focused on China’s advancement into the global and U.S. energy sector. Hunter and James Biden were more than happy to go along for the right price.”

Johnson echoed Grassey’s comments and suggested the Democrats and establishment media gaslit the American people for years with the Russia hoax instead of investigating Biden’s family’s real corruption with China.

“Senior Democrats and liberal media cooperated to smear me and Sen. Grassley with false accusations of receiving and spreading Russian disinformation,” Johnson added. “They created documents, leaked them, asked for briefings, and then leaked those, too. And then they, themselves, disseminated Russian disinformation. Fortunately, they failed to discredit our investigation because we stayed true to government records. We stayed true to the facts and the evidence.”

Great. So when’s the fucking indictment?

In text messages dating back to 2017, Hunter’s now-ex-associates James Gilliar and Tony Bobulinski discussed a breakdown of the joint venture with CEFC, the “stakes” and appeared to suggest getting the now-president-elect involved.

In text messages dating back to 2017, Hunter’s now-ex-associates James Gilliar and Tony Bobulinski discussed a breakdown of the joint venture with CEFC, the “stakes” and appeared to suggest getting the now-president-elect involved.

In another exchange, Bobulinski, in a text message to Gilliar on April 30, 2017, asked, “what is the deal w Jim Biden as he wasn’t part of the discussion but now seems a focal point.”

Gilliar replied: “With H demons, could be good to have a back up, he strengthens our USP to Chinese as it looks like a truly family business, and I like the dude.”

If that laptop belonged to the son of a Republican president, the liberal media conglomerate would have spent every waking minute covering the contents and the DOJ would have been all over it like stink on shit. The FBI also buried the evidence to protect the Bidens.

Hunter Biden also tried to enlist the help of John Kerry’s daughter to leverage Burisma’s reputation at the State Department during corruption investigations in Ukraine.  At the same time, Joe Biden Biden demanded that the prosecutor investigating Burisma be fired or Ukraine would not receive 1 billion dollars in aid.

Joe Biden is ass deep in this corruption. The evidence collected from Hunter Biden’s laptop is more than enough to indict and convict Joe, Hunter, and most of the immediate family.