This country is already saddled with a $28 trillion debt. Why in the fuck is this insanity allowed to continue?  The Dems are pushing pork, and the GOP doesn’t have the guts to stand up to it.

House Democrats’ $1.9 trillion coronavirus relief package passed during an early-morning vote on Saturday. The bill passed 219-212, along party lines. Two Democrats, Reps. Jared Golden (ME) and Kurt Schrader (OR), voted in opposition to the bill.

House Democrats decided to keep the increase in the bill even though Senate parliamentarian said it violates the budget reconciliation process.

Of the $1.9 trillion, $350 billion will go towards states and local governments. Unemployment benefits will provide Americans with $400 a week on top of their state-issued benefits.

Under this bill, the Paycheck Protection Program (PPP) is replenished with $7 billion in additional funding. The Emergency Injury Disaster Loan (EIDL) program will also receive $15 billion.

Felons, including the shitbags on death row, would receive $1400 stimulus checks.

This is where our money is going: 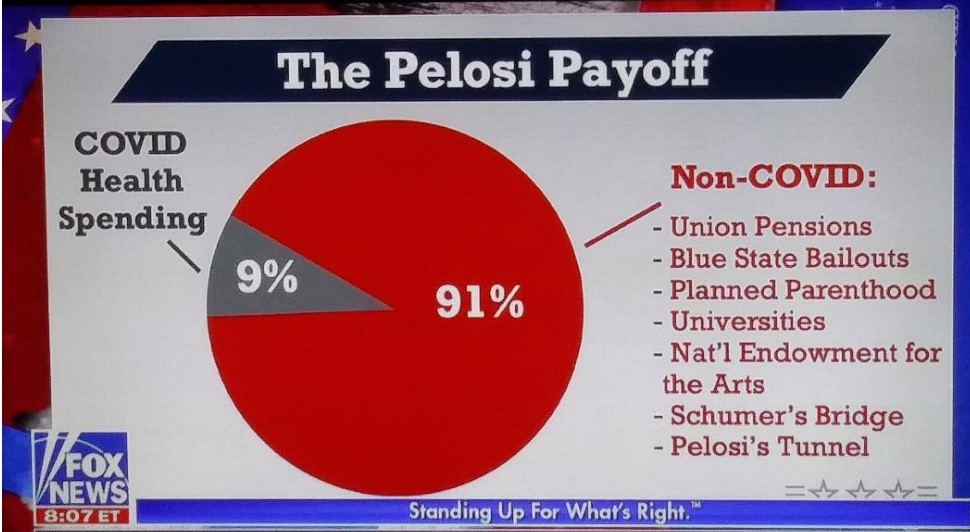 There’s no accountability for anything. Money intended for infrastructure investment, housing rehabilitation, job creation, and public services has resulted in little to show for it. That money is lining the pockets of corrupt politicians. There’s no other explanation.
Read the summary at the Citizens Against Government Waste website. Every time Congress approves a welfare check for its favorite recipients, this country gets buried under more insurmountable debt

The public at large either doesn’t give a shit or is totally clueless.

One day, in the not too distant future, it’s all going to collapse. The consequences will be devastating for America.