Hedge fund ‘investors’ manipulate the market and destroy business. It should be illegal.  After the hedge fund operatives fucked with GameStop, some people at Reddit decided to fight back and beat them at their own game.

Last March, as the country began to panic about the arrival of the coronavirus from China, a billionaire called Bill Ackman went on television and attempted to make America even more afraid than it already was.

“Hell is coming …” Ackman said during an appearance on CNBC. “There’s a tsunami coming, right? A tsunami’s coming and you feel it in the air, right? The tide starts to roll out, OK? And on the beach, people are playing and having fun like there’s nothing going on. And that is the feeling I’ve had for the last two months … We need to shut it down now … America will end as we know it, I’m sorry to say so, unless we take this option.”

Ackman was especially frightened for the future of Hilton Hotels. Hilton Hotels, he proclaimed, is “going to zero along with every other hotel company in the world.” Not long after that appearance, we learned that Ackman’s firm had made more than $2 billion from trading in the stocks, including Hilton Hotels, that many people believed he had pushed down with such historically dire predictions.

It seemed obvious to us that Ackman’s rant on CNBC was part of a dishonest investment strategy, and we said so on the air. His lawyers immediately threatened to sue us. In a long phone conversation later, Ackman swore to us that his public attack on Hilton Hotels had nothing at all to do with his desire to buy hotel stocks at a lower price or with the billions in profit that his firm subsequently reported. We’ll let you assess Bill Ackman’s sincerity.

This kind of behavior is common on Wall Street. Hedge fund managers bet money that a specific stock will decline in value. That’s called short selling, and it has no obvious value to the American economy. Short selling exists for the purpose of enriching the people who do it. Short selling hurts companies, their investors, and their employees. Ultimately, it hurts our country itself, yet it continues.

No one does anything about short selling. Regulators ignore it. CNBC applauds the brilliance of the people who do it. The last administration did nothing to stop this, and the current administration certainly won’t. The Biden White House is more tightly controlled by business interests than any administration in history. Virtually every person there is beholden to the finance establishment.

What’s happening on Wall Street is so clearly awful and so obviously destructive. The question is, who’s going to fight back against it? As it turns out, a bunch of guys on Reddit will. It fell to them to push back against the short-sellers because no one else even tried. So they did. A group of independent investors in a Reddit group called Wall Street Bets learned that hedge funds planned to short the stock of a failing retail company called GameStop. So they began buying shares of GameStop, and Gamestop surged in value, ultimately by more than 1,000%.

The hedge funds, for all their calculations, hadn’t seen that coming, and they lost billions as a result of it. One hedge fund lost so much money it needed a bailout from two other hedge funds. Meanwhile, some of the investors on Reddit got rich. But getting rich was not the whole reason they did it. They also wanted to send a message.

……Bill Ackman and the many people on Wall Street who behave like Bill Ackman understandably generate some resentment from the rest of the population. They pause and say, “Wait a second, what exactly did you do to make $2 billion? Did you improve anything? Was it just another sleazy inside deal that the rest of us were excluded from participating in? Tell us now, and please speak slowly so we can understand your answer.”

That was pretty much the message the Reddit guys were sending to Wall Street. Watching at home, a lot of Americans applauded that message. But others weren’t happy. People who lose money rarely are happy. But here’s what makes the hedge fund managers different from you: They have a lot more power than you. They control the game, so they immediately changed the rules of the game.

On Thursday, the investment app Robinhood, which is used by independent investors to buy and sell stock, banned its users from trading GameStop shares, as well as shares of several other companies.

No one even knew that was legal. Maybe it isn’t, but Robinhood did it anyway, and they did it under pressure from the hedge funds who they really work for. So much for the free market you’re always hearing about. There’s nothing free about it. Turns out what Wall Street really hates is outsider trading, the idea that people from outside their world might be getting rich. That’s the one thing they can’t abide.

The management of Robinhood, of course, didn’t admit any of this. They’re still posing as an outpost of inclusive, progressive values in a sea of rapacious capitalism. The irony being, of course, that Robinhood is the most rapacious. They sell information they gather from their customers to the hedge funds who use it for their advantage. And most customers don’t even know. How’s that for progressive? On the other hand, they do support Black Lives Matter.

Other platforms took effectively the same position, but felt the need to pretend a little more than Robinhood did. They justified changing the rules by attacking the very people they were hurting by changing the rules. The communication service Discord, for example, banned users from the Wall Street Bets group for using its platform. They didn’t do that because those guys were beating the hedge fund guys at their own grubby game. No, they were banned, according to Discord, for engaging in “hate speech.”

……It was right about this point that we started hearing an awful lot about identity politics. In 2011, when the Occupy movement was at its peak, mentions of the word “racism” in The New York Times, The Washington Post and Los Angeles Times skyrocketed. In the case of The Washington Post, America’s most committed defender of entrenched power, mentions of racism nearly tripled at the height of Occupy Wall Street. Of course, it worked. They changed the subject, and they’re doing that again right now.

SORKIN: What I’m concerned about is that this is a pump-and-dump scheme that effectively is being cloaked as Mother Teresa has arrived on the scene. I think there are real underlying issues with the system that need to be resolved. I do not want to protect the system. I love watching the little guy beat the big guy as much as anybody. But what I wonder is whether these folks trying to “stick it to the man” are ultimately going to be sticking it to themselves.

Where was Andrew Ross Sorkin for the last dozen years, as the central bank shoveled trillions to Wall Street, thereby enriching a few, devaluing the American dollar, guaranteeing hyperinflation, and, of course, destroying the value of the average person’s savings? The Reddit guys noticed. That’s why they’re mad.

Janet Yellen might have something interesting to say about all of this. She ran the Federal Reserve for years, beginning under Barack Obama. As much as any single person on Earth, Janet Yellen is responsible for creating the distorted financial system that made the Reddit revolt possible, indeed, inevitable.

As of last week, Janet Yellen is the treasury secretary. Here’s what Joe Biden’s flack had to say Wednesday about her:

JEN PSAKI: I’m also happy to repeat that we have the first female treasury secretary and a team that’s surrounding her and often questions about [the] market, we’ll send to them. But our team is, of course, our economic team, including Secretary Yellen and others, are monitoring the situation. It’s a good reminder, though, that the stock market isn’t the only measure of the health of our economy, doesn’t reflect how working and middle class families are doing.

Let’s translate: Janet Yellen has nothing to say about Reddit or GameStop, short selling or even the dangerously corrupt condition of American finance. More broadly, she hasn’t thought about those things and probably doesn’t even care. Janet Yellen herself has made millions from hedge funds, including from funds that lost money to the Reddit guys. But we’d like to remind you that Janet Yellen is a woman and so are many of the people around her. These brave leaders have broken glass ceilings. They are empowered, and that’s enough. We can’t give you an answer. We won’t improve your life. But we do have diversity, so you should be happy.

That’s their position. Has there ever been, in all human history, a clearer distillation of the essence of neoliberalism than that? Maybe at this point, people will start to catch on to the game. Suddenly, people are catching on to a lot of things. We may come to see the Reddit guys and their effective defense of GameStop as a kind of turning point in this country’s history. Whatever our current system is, it is definitely not the capitalism we were promised, not even close.

BTW: Janet Yellen got $800,000 from a hedge fund involved in this Robin Hood/GameStop scandal.

Here’s a quick rundown of what ‘short selling’ involves: 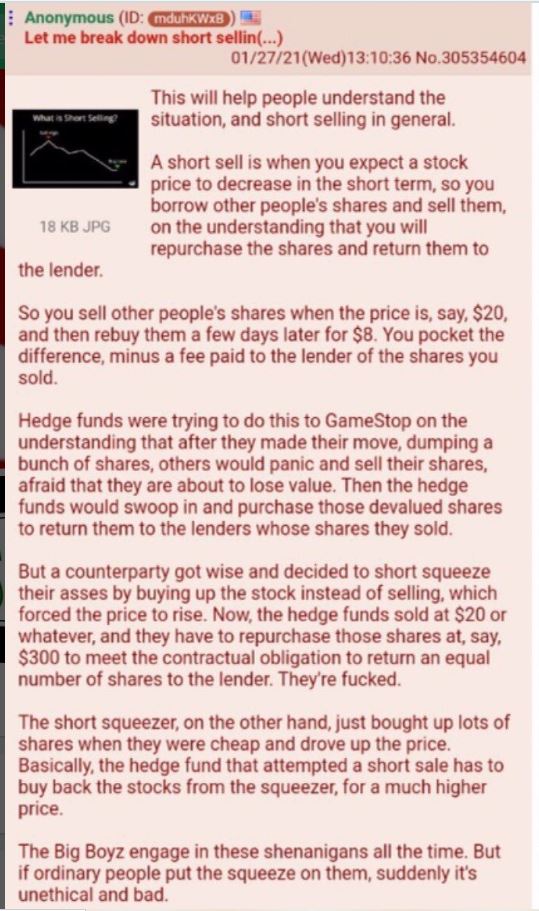 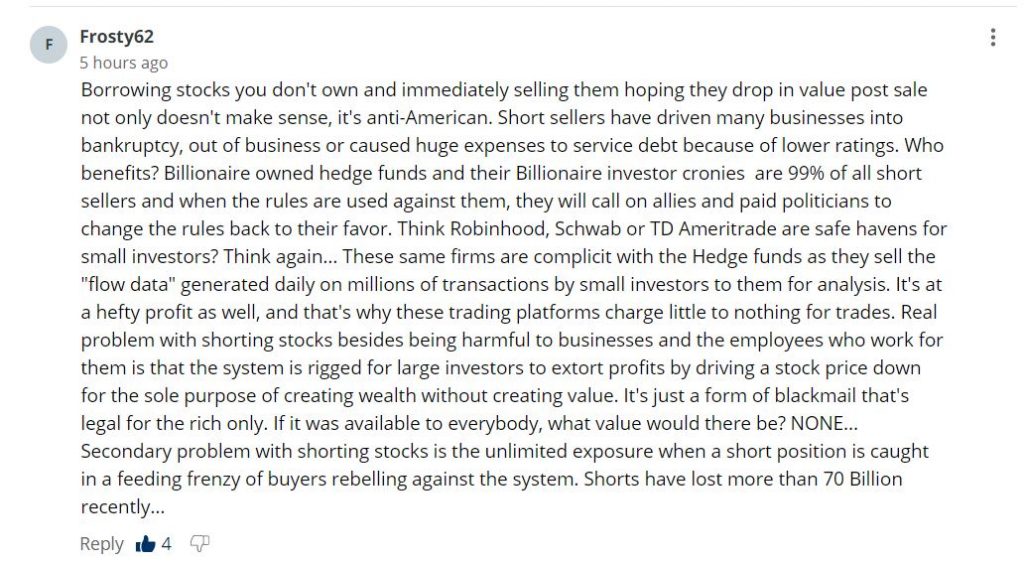 The SEC needs to put a stop to this shit.  All it does is perpetuate corruption and allow some Wall Street shitbags to steal the revenue of a business they ruined.