If there was any doubt over how disrespectful Dems are toward America and veterans, this should clear things up.

Kamala Harris faced backlash Saturday for neglecting to mention fallen military personnel or veterans in a tweet that commemorated Memorial Day weekend with an image of herself.

“Enjoy the long weekend,” Harris wrote along with her own picture.

“…and pay tribute to the courageous men and women of our nation’s military who sacrificed their lives in defense of our freedoms and liberties,” tweeted Rep. Lee Zeldin (R-NY).

“This is unreal,” wrote Newsmax contributor and retired U.S. Marine Corps gunnery sergeant Jessie Jane Duff. “No regard or gratitude for the men and women who made the ultimate sacrifice for our great nation. Could you possibly be more obtuse, @VP?”

“Comforting words to the families of those that lost loved ones in service to our country. With a picture of herself for good measure,” wrote Arthur Schwartz. “Imagine the meltdown that @jaketapper would be having if Donald Trump tweeted this.”

……“Memorial Day is a ‘Long Weekend’ and an excuse for Kamala to post a photo of herself — grotesque,” wrote Turning Point USA chief creative officer Benny Johnson.

This was their message for Memorial Day. “grotesque” and “obtuse” don’t begin to describe it. 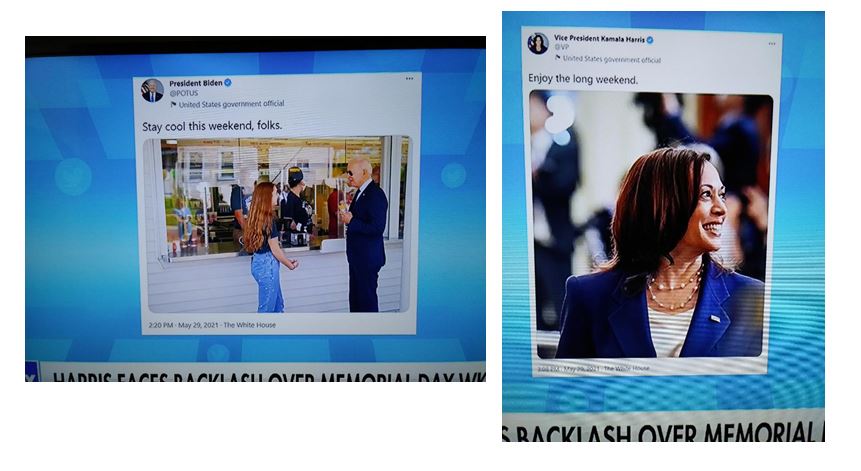