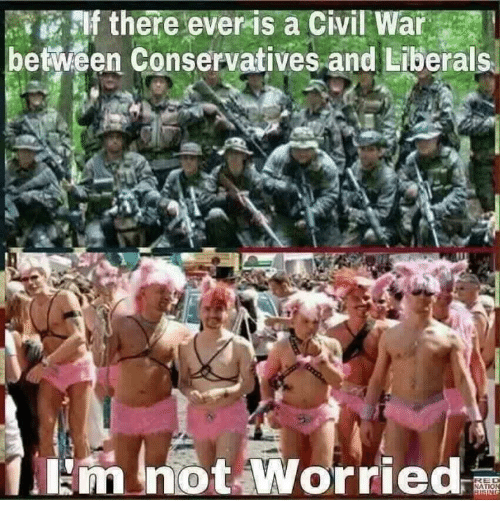 Dorsey called it “a great read”:

……As for the “New Civil War,” it’s already begun according to the article and the “final battle is upon us:

The Final Battle Begins in 2018

“America is desperate for a functioning political supermajority that can break out of our political stasis and boldly move ahead and take on our many 21st-century challenges. The nation can’t take much more of our one step forward, one step back politics that gets little done despite the need for massive changes.
America today has many parallels to America in the 1850s or America in the 1930s. Both of those decades ended with one side definitively winning, forming a political supermajority that restructured systems going forward to solve our problems once and for all. In the 1850s, we fought the Civil War, and the Republican Party won and then dominated American politics for 50 years. In the 1930s, the Democratic Party won and dominated American politics for roughly the same amount of time.
America today is in a similar position. Our technologies, our economy, our geopolitics are going through fundamental changes. We are facing new challenges, like climate change and massive economic inequality, that must be addressed with fundamental reforms.
America can’t afford more political paralysis. One side or the other must win. This is a civil war that can be won without firing a shot. But it is a fundamental conflict between two worldviews that must be resolved in short order.
California, as usual, resolved it early. The Democrats won; the Republicans lost. The conservative way forward lost; the progressive way forward began. As we’ve laid out in this series, California is the future, always about 15 years ahead of the rest of the country. That means that America, starting in 2018, is going to resolve it, too.”

Does he think we want to transform the rest of the country into California?  Seriously? The progressive way forward? Has this shit for brains actually seen what’s happening in California?

California’s cesspool is run by a liberal oligarchy that has transformed the state into a province for the leftwingnut fringe.  Their educational system pushes communist agenda,  “gay history”,  disrespect for the American flag,  pro-muslim terrorism, and tuition and criminal facilitation for illegal aliens. Liberal nation-states like California have welcomed the flood of vermin from south of the border, and it’s taken a big toll.    Hoity-toity affluent liberals get pretty miffed when their manicured communities are invaded by illegals.   The rest of us peons are expected to put up with it.

The state is rife with crime, poverty, gangs, and massive debt.  The state is going bankrupt, it inflicts outrageous taxes, and businesses are fleeing Brown’s anti-capitalist regime like crazy.

It’s the worst state in America for quality of life. The best view of California is in the rear-view mirror.

As for the Dems becoming a ‘supermajority’, America suffered through that shit with 8 years of Obama’s corrupt regime, a Dem-run Congress, and the aftermath of his ObamaCare Frankenstein.  The Tea Party movement was formed as a response to his tyranny.  And in spite of the targeting by his weaponized IRS, the organization still thrives.  BTW: During Obama’s tenure, the Dems lost over 1000 seats, including congressional, state legislative, governorships, and the presidency with the election of Donald Trump.

If this pouf’s idea of fighting a new ‘civil war’ is by California standards, it’s a side-splitting joke.  Politically, and economically, it’s a disaster. America can’t afford it. And besides, they couldn’t fight their way out of a fucking wet paper sack.  It won’t be ‘resolved’ the way he thinks. There are millions of armed citizens (including yours truly) in America who would kick their asses all the way back to their west coast shithole and make it home in time for a big steak dinner.

As for California’s “future”, they can keep it.

Mark Nuckols at Townhall has a different take:

……It is not yet inevitable, but all true American patriots must be prepared for the coming battle. And the costs in blood will be heavy. This war will not be fought like the American Revolution or the Civil War of 1861-65, where disciplined armies observed the laws of war and respected civilian lives.

This war will be waged by far-left radicals and their deep-state puppet masters. For them, civilian casualties and massacres will not be moral evils, but merely part and parcel of their larger plan to “reconstruct” America. Their objective is simple: overthrow our constitutional order, destroy our way of life, and deprive us of our freedom, our liberties, our property, and our honor.

I have spent many years in countries that have suffered civil war and its horrors, such as Russia (including Chechnya), Syria, Lebanon, Croatia, Bosnia, and Kosovo. I have also carefully studied the history of revolutions and civil conflict. And until recently I would never have believed a second civil war in America to be possible. But the warning signs are all there, and they began appearing most visibly when Donald Trump became the Republican nominee for president. He is the first American politician that strikes fear into the hearts of both the deep state and the radical left. And that fear makes them extremely dangerous.

I believe one likely spark for the Second American Civil War will be the result of a coup d’etat carried out by anti-America extremists. It will catch most Americans by surprise. The coup plotters will act quickly to seize the critical levers of power, before any opposition has a chance to react. And they will be aided and abetted by the kinds of people Lenin referred to, contemptuously, as useful idiots.

The shock troops will come from the ranks of Antifa and radical anti-white elements of the Black Lives Matter movement. These fascist stormtroopers will be augmented by the even larger numbers of veterans of Occupy and other far-left movements. And jihadists from across the globe will flock to support this coup. But the real power will be behind the scenes, in the hands of the bureaucrats of the American deep state, who will see such a far-left coup as their best chance to preserve and expand their far-reaching powers, but which President Trump threatens.

Much of the mainstream media will initially be warmly supportive. A few so-called conservatives at The New York Times may meekly protest that while the ends of the revolution are laudable, perhaps the means are a bit too messy. But most of the liberal media will fall into lockstep, in the belief that as long as they are supportive, the coup leaders will allow them to stay in business. Many Americans will believe their pro-coup propaganda and quietly submit, or at least refrain from overt resistance.

The faculties at Harvard, Yale, and Princeton will pass resolutions of fervent support, and their brainwashed students will rush to enlist in the revolution before all the excitement passes. Likewise, left-leaning foundations and oligarchs will promise financial support. And the Federal Reserve will flood the economy with debased currency.

Not all Democrat politicians will turn traitor, but there will be some prominent establishment “statesmen” who will betray our country. They will naively believe that they will be able to control the revolution and turn it to their own purposes. When their fig leaf of respectability is no longer required, they will get the fate they deserve. But their role will be critical, to give coup leaders the guise of “continuity of government” while they seize the critical levers of power.

America’s external enemies will not sit by idly. The new revolutionary government will offer generous terms in return for “foreign assistance” (meaning secret police), and troops if necessary. Expect a Treaty of San Antonio whereby Mexico “recovers her historic territories” of Texas, New Mexico, Arizona, and southern California. Russia will expect a return of Alaska (and its oil) to the Motherland. China and the European Union will demand we surrender our economic sovereignty and become vassals of Beijing and Brussels. And, of course, the United Nations will offer to send in the “blue helmets” to “restore civil order.” North Korea, Cuba, Venezuela, and Iran will all also want in on the spoils in return for “technical support.”

And what will be the agenda of this regime? The first priority is obvious: the confiscation of all privately owned guns. An armed citizenry ready and prepared to defend its rights would be an intolerable threat to the regime. The next logical step would be identifying any and all possible sources of opposition and interning them and their families in “re-education” camps. The third priority will be a radical redistribution of property. It would destroy the American free-enterprise economy, but short-term it would guarantee the loyal support of all those hoping for a share of the spoils.

……The continued existence of our great country, the United States of America, will depend on the bravery, strength, resourcefulness, and patriotism of her most loyal citizens. We must stand prepared for all possible threats.

The DemProgs engaged in an attempted coup d’etat in 2016, with the complicity of Obama’s DOJ and FBI.

Obama’s fingerprints were all over that shit. Once Brennan, Clapper, Lynch, and Comey put this whole scheme together, Obama was briefed and went along with it.

The Deep State didn’t just declare war on President Trump, they are now targeting his supporters and anyone else who believes the principles in the Constitution too much for their own good.