The more that comes out about FBI corruption, the uglier it gets.

Background: As part of its ongoing Jan 6 shitshow, the FBI concocted a fake kidnap plot and lured a group of ordinary people in Michigan into looking like terrifying ‘right-wing extremists’, those ‘violent White nationalists’ Joe Biden is always ranting about. A jury acquitted two of the ‘kidnappers’ when they realized that the FBI funded and set up the whole thing—even to the point of facilitating introductions among the “conspirators”.

……KELLY: Right. So, this is obviously interesting — an interesting development. As Kash Patel has pointed out numerous times, the president has the authority to declassify anything at any time before he leaves office. If that is the most explosive material that they have confiscated, it doesn’t certainly sound like anything that would threaten the nation’s security or even rise to the level of a serious crime. So, (unintelligible) information, certainly it’s interesting how it’s being pieced together, but I don’t think, if that’s it, and it’s not something more explosive, this is going to justify what Merrick Garland’s DOJ and Christopher Wray’s FBI did on Monday.

……There were actually six men charged with inspiring to kidnap Gretchen Whitmer. Two of those men have pleaded guilty. They are cooperating with the government. They testified during the April trial and they will testify again for the government. But, yes, you are correct, two men were acquitted. The other two men, Adam Fox, the alleged ringleader who lives in a basement of a vacuum repair shop in a Grand Rapids strip mall, the alleged ringleader, and another man, Barry Croft, are on re- — a second trial now. Even though I covered most of the first trial, the thing I’m learning in this trial, this new trial that the FBI is talking about — I call it Fednapping hoax, what the FBI did.

……And what came out today is you had informants who were breaking protocol, breaking basically FBI procedures by, number one, a female informant sleeping in the same hotel bed as Barry Croft, now a defendant, also getting high with him, which, of course, is against FBI protocols. There were other informants who got high with these targets.

The FBI says, “Well, we have to let them play along,” but it’s a clear violation, as one FBI agent confessed today, these informants are not supposed to be doing this. And then you had more — you had the FBI run undercover agents into this operation as this group was starting to splinter. But this was completely manufactured by the FBI. They concocted a fake militia group and lured people into it. They created a Facebook page to lure people into that and then surveil their online activities.

They created encrypted chats. Like, this is everything that people on our side suspect about the FBI, especially now related to January 6th, it is coming out once again and even in some more detail in this new trial. I think the government is really gonna regret retrying these two men, especially in a place like western Michigan, which is deep Trump country, and with the backdrop of the Mar-a-Lago raid on Monday, you know, looming very large in this trial.

……In fact, an FBI agent today admitted, the defense attorney directly asked me, “Did you ever have any evidence this was a white supremacist group?” And he said, “No, I did not.” Now, I’m sure you’ll recall on the headline as people were voting in October 2020 when this whole caper, this shocker, kidnap, assassination plot was revealed, that this was it. It was a white supremacist, right-wing militia taking its orders from Donald Trump to try to assassinate and abduct — abduct and assassinate not just Gretchen Whitmer but Ralph Northam too.

That was another part of the FBI’s operation. They tried to entrap another man in Virginia to do the very same thing there that they were doing in Michigan. So, none of it is true, which, Clay, is why the media is completely ignoring it. They ignored the April trial. They’re definitely ignoring this one. 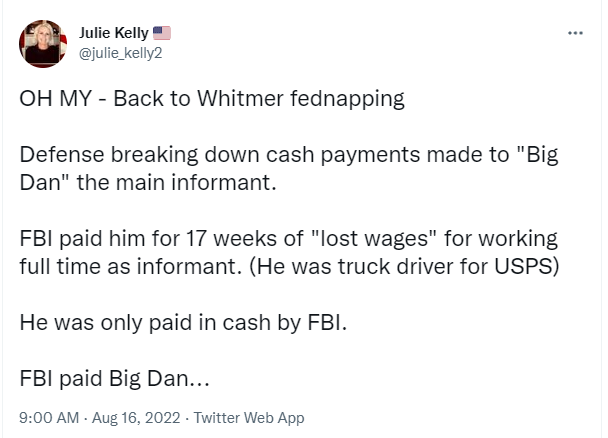 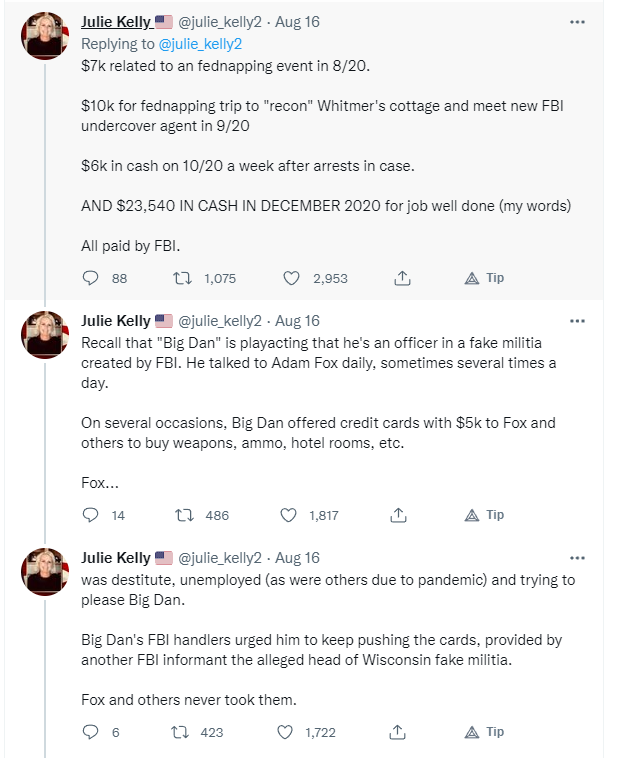 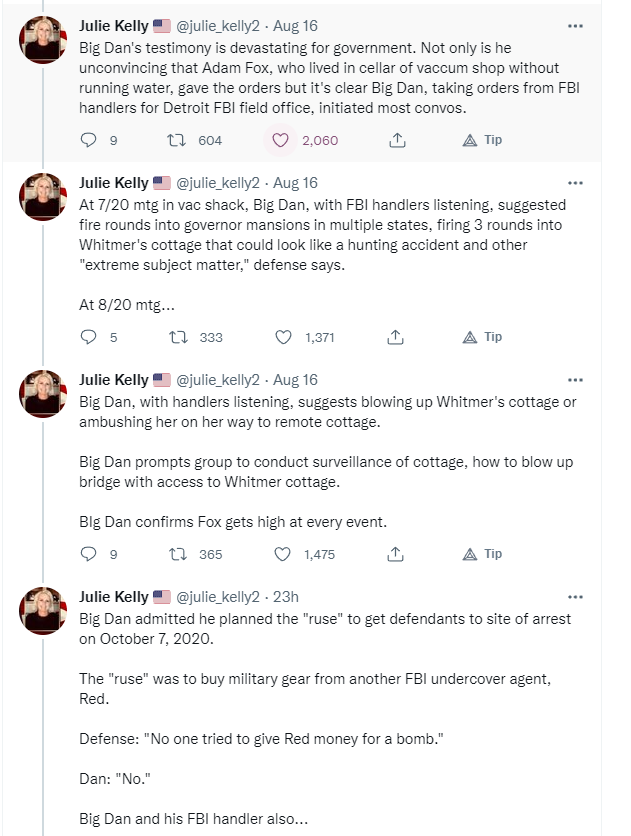 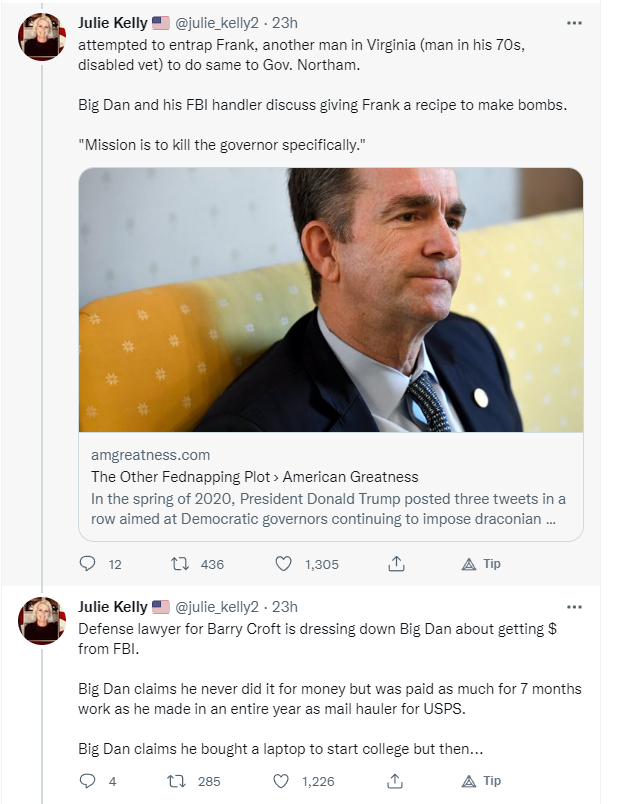 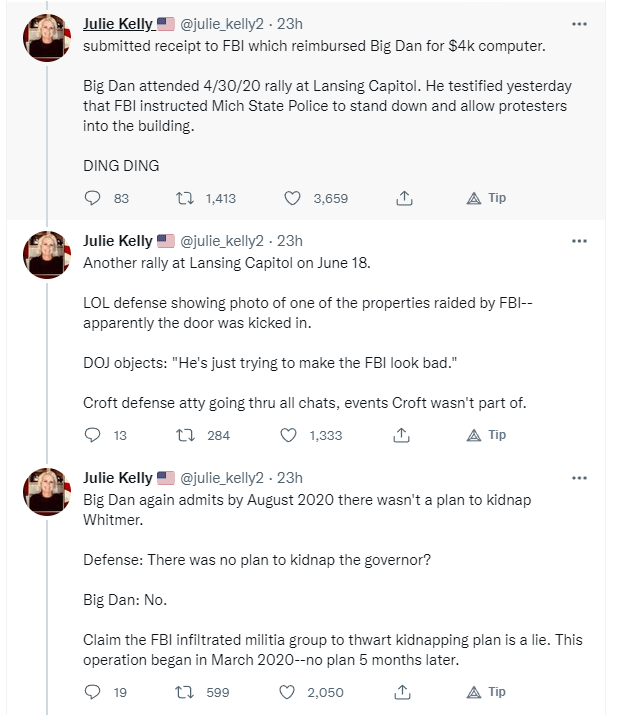 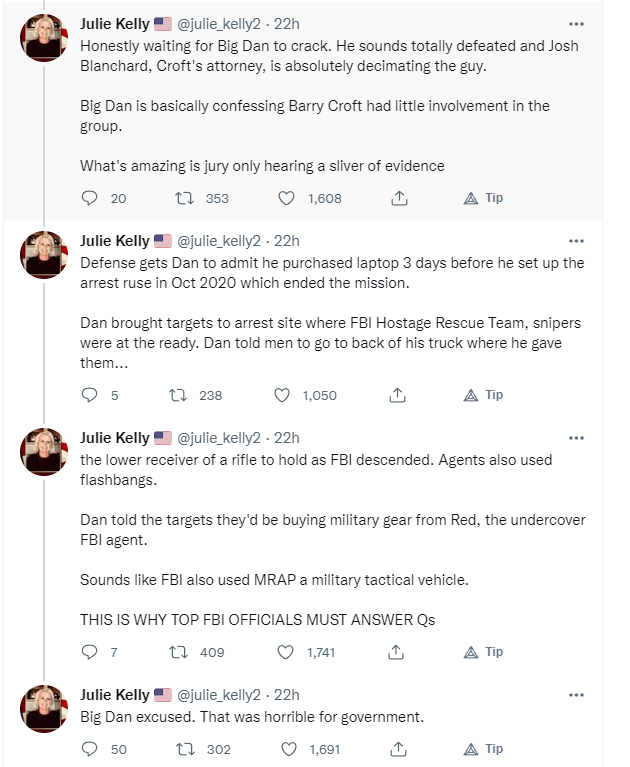 The FBI agent at the center of the Whitmer plot, Richard Trask, was charged with assault and eventually fired after a domestic abuse incident with his wife. Trask is a rabid leftie who posted profane anti-Trump rants on his personal Facebook account, and blasted Americans who voted for him.  The agent in charge of the field office overseeing the Whitmer plot, Steven D’antuono , was promoted to lead the DC field office in late 2020.  He also went on to oversee the “investigation” into the January 6 election protest. How convenient.

The FBI needs to be dismantled from the top down. The criminal malfeasants in the agency should be indicted and prosecuted. We know that won’t happen because agencies weaponized by Dem regimes trample all over the Constitution while Congress does nothing.

The constitution and civil liberties have been squashed by Biden’s DOJ and FBI thugs who use the 6 January rally as justification for their authoritarian reign of terror.