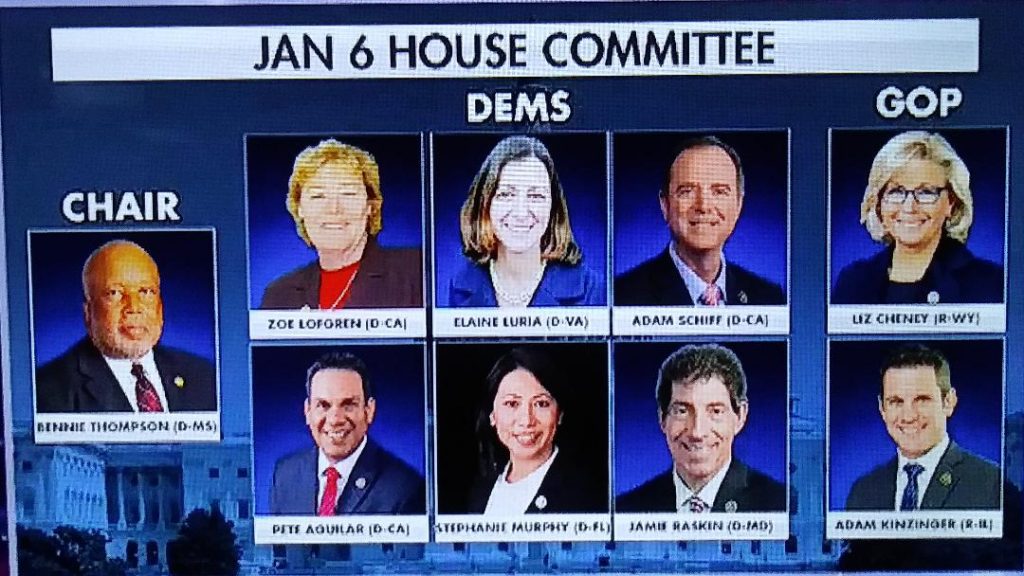 Chairman of the Committee, Bennie Thompson:

Has a history of backing extremist black militant groups in America and served on the National Coordinating Committee of the  Communist Party USA.

Schiff was one of dozens of prominent leftists who urged Obama to award, posthumously, the Presidential Medal of Freedom to the late Fred Ross Sr., a Saul Alinsky-trained radical who had mentored both Cesar Chavez and Dolores Huerta.

Schiff has shown an affinity for radical Islamist organizations. In September 2013, for example, he stated that the good work done “across the nation” by the Hamas-linked Council on American-Islamic Relations (CAIR) was “much appreciated.” In a similar spirit, Schiff said in October 2017 that “CAIR’s vision and mission is more important now than ever before – to be a leading advocate for justice and mutual understanding, and [to] enhance understanding of Islam.” And on August 5, 2019, Schiff was a featured presenter at an interfaith community forum moderated by Salam Al-Marayati and co-sponsored by the Muslim Public Affairs Council.

Schiff met with a Chinese Communist Party official previously responsible for spearheading the regime’s foreign influence operations on a visit to Washington, D.C. sponsored by the China-United States Exchange Foundation.

He has lengthy connections to corrupt socialist billionaire George Soros.

He fabricated the transcript of a 2019 phone call between former President Donald Trump and Ukraine’s president, and doctored text messages between Mark Meadows and Rep. Jim Jordan.

He lied repeatedly to promote the Trump-Russia “collusion” hoax.

He should be charged with the illegal subpoena of phone records, lying to Congress about the “whistleblower” and abuse of power.

Made six-figure investments in a Chinese Communist Party-linked tech firm flagged by the U.S. State Department for aiding the regime’s military and espionage capabilities.  Active with the Democratic Socialists of America and the Labor Caucus.

He was one of the raving lunatics in charge of the anti-Trump impeachment shitshow.

Murphy’s Federal Election Commission (FEC) filings shows that she has a flood of corporate cash into her campaign from big multinational companies with deep ties in China.  She wants to remove tariffs on Chinese imports, especially since her husband has  regular contact with CCP members who are required by law to work at his company’s facility.

She voted for both sham impeachments of President Donald J. Trump, supports the radical BLM movement, backs unconstitutional gun-grabbing laws, is in favor of open borders, and has advocated for the banning of anyone who attended the 2020 “Stop The Steal” rallies  from serving in the military or obtaining security clearances.

She also wrote a letter of support to the Council on American-Islamic Relations (CAIR) on the occasion of their 24th anniversary in September 2018.

On January 8, 2016, Aguilar stood on the House floor and characterized the infamous December 2, 2015 terrorist attack in San Bernardino, California —in which a pair of gun-toting Islamic jihadists had killed 14 people and wounded 22 others at a company Christmas party — as part of “the epidemic of gun violence” that Congress should already have addressed by passing stricter gun-control measures. He said nothing about the Islamic component of the mass murder.

Aguilar has praised the Hamas-linked Council on American-Islamic Relations (CAIR).

Was part of the anti-Trump impeachment circus.

Wrote a letter of support to the Council on American-Islamic Relations (CAIR) on the occasion of their 24th anniversary in September 2018.

Lofgren voted no on military border patrols to battle drugs and terrorism. Lofgren is a strong supporter of illegal aliens under the guise of ‘comprehensive immigration reform’

Affiliated with the Aspen Institute, which views the United States as a nation rife with deep-seated “structural racism”, “climate change” ideology, and receives financial support from George Soros’s Open Society Institute.  Lofgren has made several trips which were funded by the institute.

Backed legislation that would have banned criticism of the violent ‘religion’ of Islam. Met with the National Iranian American Council in protest of President Trump’s stance against the Iranian nuke deal.  They gave money to her 2018 campaign in return.

She’s a Never Trumper who was happy to vote for the bogus anti-Trump impeachment.

Cheney’s husband works for a law firm that works on behalf of companies linked to China’s military, intelligence, and security services. His employer, Latham & Watkins, helped push through billion-dollar deals for Chinese companies.

For her role as a Dem tool, she has been censured by the RNC and has been booted from the Wyoming GOP.

RINO Adam Kinzinger who likened President Donald Trump to a “cult leader.” “Cult leader”? Is that what RINOs call a president who liked and respected his supporters? Screw Kinzinger.

He was also censured for being a Dem bootlicker.

One of his most pathetic moments as a politician came when he fake-cried during the maudlin 6 January hearings.

This collection of unhinged malfeasants was assembled by Pelosi, who ousted any member who showed the slightest intention to  present facts that directly refute the DNC narrative, and packed it with leftwing goons with an anti-civil liberties ax to grind.

I don’t expect this fraudulent inquisition will end to the Dems’ pleasing.