Hoity-toity affluent liberals get pretty miffed when their manicured communities are invaded by illegals.

They are really getting catty with each other: 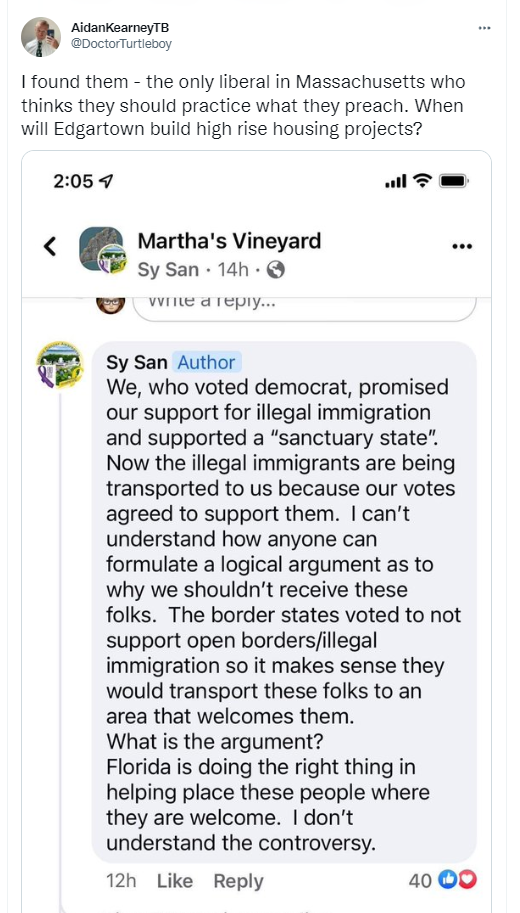 How dare DeSantis send those smarmy illegals to a wealthy, white liberal enclave. So much for diversity.

Lawmakers in Massachusetts were tasked with caring for dozens of migrants Wednesday after Florida Gov. Ron DeSantis sent two planes full of migrants to Martha’s Vineyard, a ritzy island located in Dukes County.

On Wednesday, Democratic lawmakers voiced their criticism online after they were forced to act swiftly to provide them shelter, food, blankets and other necessities to the 50 migrants who now reside in their state.

Rep. Dylan Fernandes, a local lawmaker who represents Martha’s Vineyard as well as Falmouth, Nantucket and Gosnold, said on social media that he was part of the logistical effort to welcome the migrants, which he claimed DeSantis sent “to gain cheap political points.”

……”Currently immigrants are being dropped off on Martha’s Vineyard by chartered flights from Texas,” he said in another tweet. “Many don’t know where they are. They say they were told they would be given housing and jobs. Islanders were given no notice but are coming together as a community to support them.”

……In another tweet, Fernandes described the migrant drop-off as “evil and inhumane” and accused Republicans of using human lives “as political pawns.”

That’s hilarious. Especially when Dems were all for enforcing the immigration laws until illegals became their political tools.

They also had no problem with Biden sneaking illegals into the country on secret flights in the middle of the night.

Kammy (“the border is secure”) Harris received two busloads of the border problem outside her residence.

Send them to every single wealthy liberal enclave in the country. The next stop should be Biden’s summer residence in Rehoboth Beach and his 6,850-square-foot mansion in Greenville, Delaware.

The DHS is building a wall around his beach house. The illegals can scale that one even easier than the unfinished one at the border.

Fox News interviewed one of the illegals standing outside Kammy’s residence:

Since Kamala won’t visit the border, the border was brought to her doorstep.

Texas Governor Greg Abbott sent the illegals to Kamala Harris’s front lawn after she absurdly claimed the border is secure.

Fox News interviewed some of the illegals standing outside of Harris’s residence and even they said the border is wide open.

“Yeah, we came illegally, not legal,” he said.