They’re not “immigrants” or “migrants”. They’re invaders. And Biden has thrown open the borders to let them in.

The border states are fed up with this shit.  GOP governors are shipping the illegals right into the Progs’ backyards. 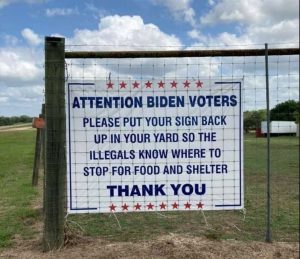 “Yes, Florida can confirm the two planes with illegal immigrants that arrived in Martha’s Vineyard today were part of the state’s relocation program to transport illegal immigrants to sanctuary destinations,” an official for DeSantis’ office said in a statement. “States like Massachusetts, New York, and California will better facilitate the care of these individuals who they have invited into our country’ by incentivizing illegal immigration through their designation as ‘sanctuary states’ and support for the Biden Administration’s open border policies.”

The official continued, “As you may know, in this past legislative session the Florida Legislature appropriated $12 million to implement a program to facilitate the transport of illegal immigrants from this state consistent with federal law.”

Fox News aired a video showing the illegal immigrants getting off planes at Martha’s Vineyard Airport.

Since the Dems are always bragging about their adoration for illegals, they can have as many as their bleeding hearts desire, right in their own fucking blue towns.

We’ll see what happens when they finally have enough.