This is why teachers’ unions need to be eliminated.

A group of current and former teachers and others in Loudoun County, Virginia compiled a lengthy list of parents suspected of disagreeing with school system actions, including its teaching of controversial racial concepts — with a stated purpose in part to “infiltrate,” to use “hackers” to silence parents’ communications, and to “expose these people publicly.”

Members of a 624-member private Facebook group called “Anti-Racist Parents of Loudoun County” named parents and plotted fundraising and other offline work. Some used pseudonyms, but The Daily Wire has identified them as a who’s who of the affluent jurisdiction outside D.C., including school staff and elected officials.

The sheriff’s criminal investigations division is reviewing the matter — but the group’s activities might be no surprise to top law enforcement because the county’s prosecutor, narrowly elected with the help of $845,000 in cash from George Soros, appears to be a member of the Facebook group.

Secret communications reviewed by The Daily Wire do not offer any evidence of racism by the group’s targets, or even attempt to. Their opponents were apparently those who objected to, sought to debate, or were even simply “neutral” about “critical race theory,” a radical philosophy opposed by many liberals and conservatives but increasingly embraced by governments.

In recent years, Loudoun’s school system has flooded its curricula and policies with racial rhetoric, paying about $500,000 to one racial consulting company alone. It required all staff to undergo “Equity in the Center” training that promoted a sense of injustice and urgency.

……The late-stage result of an experiment in saturating children’s education systems with the language of torrid oppression looks a lot like Beth Barts, a white, 50-year old former educator who was elected to the school board in 2019.

Barts has a reputation for lashing out at parents who either questioned what she calls the “equity” agenda or advocated for the reopening of schools. For her pattern of social media conduct, Barts’ colleagues censured her in a closed meeting on March 4, saying Barts failed to “welcome and encourage active cooperation of Loudoun County residents,” the Loudoun Times reported. On March 9, the board temporarily removed her from all committee assignments.

Barts deleted her Twitter account, but the events appeared to trigger more erratic behavior on the private Facebook group, with Barts rallying a crew who were convinced that Loudoun’s other school board members, mostly Democrats supportive of “equity” efforts, were insufficiently aggressive in pursuit of their stated racial aims.

At the same time, other parents who believed that causing young children to focus too much on race could diminish tolerance and harmony, rather than improve it, were gaining traction. Groups called the Virginia Project and Parents Against Critical Theory held a webinar called “What is CRT and its impact on Loudoun County Schools” on March 7.

……Members of the “Anti-Racist” group sprang into action, listing dozens of parents, often including where they lived, their employers, or their spouses’ names.

Durham, who posted under the name Jen Morse, works outside of education, for the American Society of Ophthalmic Administrators. But it was a former teacher, Hilary Hultman-Lee, who executed on the idea most prolifically.

“Regarding the anti-CRT movement, we’d like to compile a document of all known actors and supporters. Please comment below with legal names of these individuals, area of residence and or school board Rep known, known accounts on social media, and any other info that you feel is relevant,” wrote Hultman-Lee, who at one point taught Latin at Potomac Falls High School and who is listed as doing business with the school district as an education consultant.

Jen Morse posted to the “Anti-Racist Parents of Loudoun County” Facebook page, and urged 636 members to do the following:

-Infiltrate (create fake olive profiles and join these groups to collect and communicate information, hackers who can either shut down their websites or redirect them to pro-CRT/anti-racist informational webpages)

Indeed, a parent who spoke out against the CRT has been targeted for harassment: 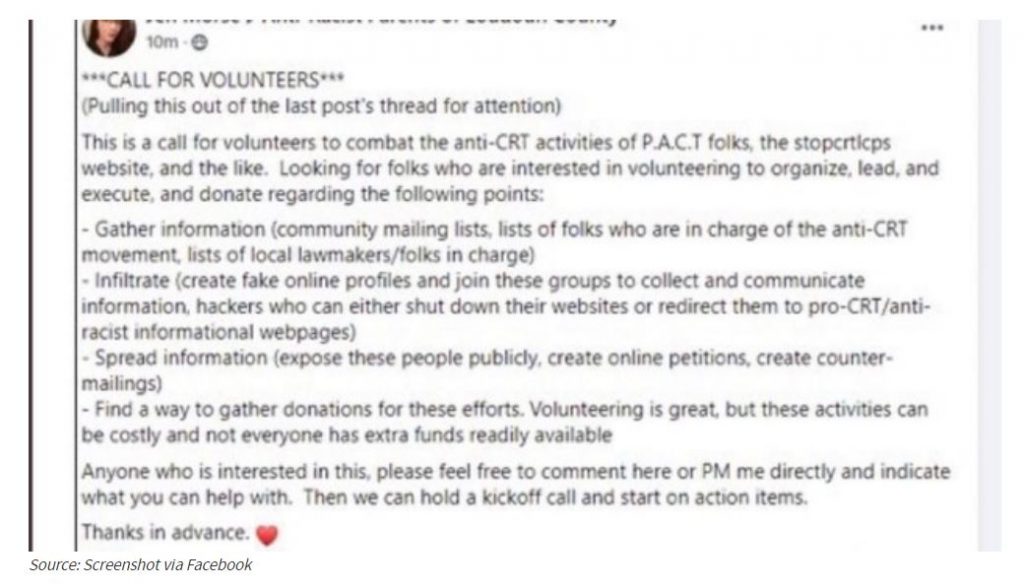 Leftwing indoctrination in America’s schools has become a malignancy.  Academic intelligentsia wants complete control of your kids and it will use union propaganda, insults, dismissive epithets, and force to get it.

When America falls, it will be from within. This shit will accelerate the destructiion.

2 thoughts on “Fascist Teachers in Virginia Compile List of Parents Who Object to Racial Curriculum, Plot War on Them”