Aside from the ballot tampering, voter fraud, and “machine malfunctions”, the Dems used their symbiotic relationship with the media to control the narrative; which for many low information voters, Dems especially, is not difficult. 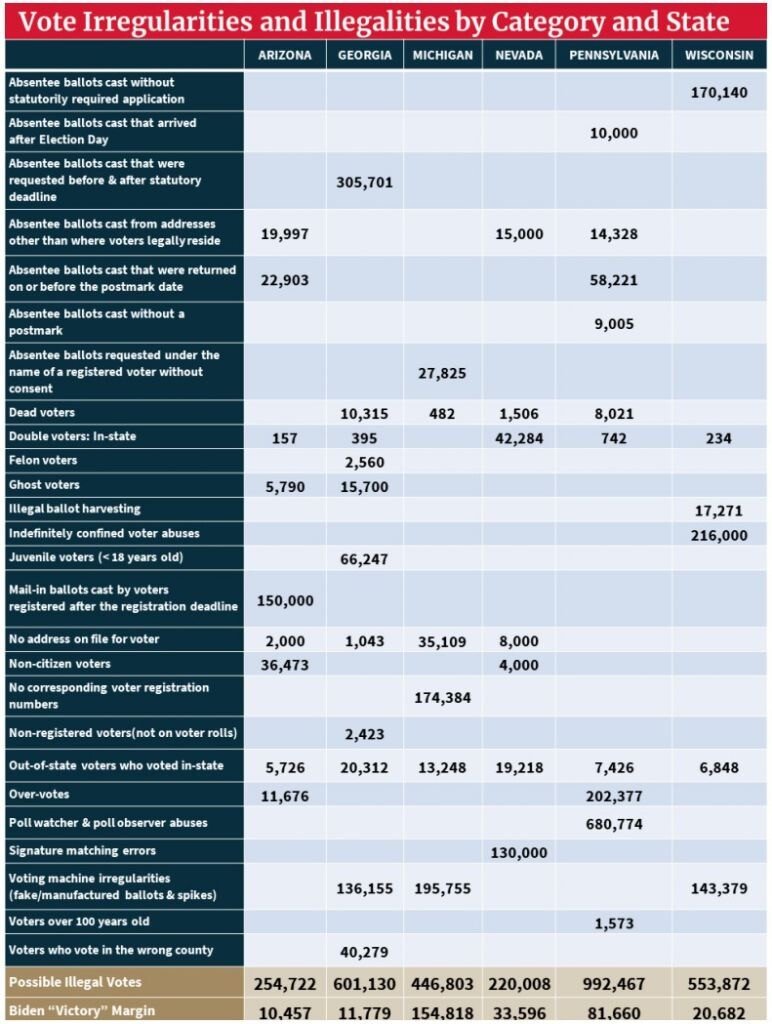 Now that Democrats are poised to control the White House, Senate and House, the traditional game of finger-pointing and recrimination will begin inside the GOP.

The first instinct for politicians will be to assign blame, call names and jockey for position. But the 2020 election wasn’t just an election, it was a political watershed in which the rules and strategy for winning were rewritten.

The November election (and Tuesday’s Georgia curtain call) wasn’t won and lost by the tactics, spending, individual players and messaging in the weeks before Nov. 3, according to interviews conducted with more than three dozen frontline players.

Rather, its outcome was cemented long before Labor Day 2020 by a Democratic machinery of former Barack Obama proteges, like David Plouffe, John Podesta, David Axelrod and Stacey Abrams, who worried far less about the tactics of ads, travel (Joe Biden hardly did!) and fundraising and far more about the strategy of how to control the narrative and the rules that would shape the outcome.

They even told the Republicans and the public what they planned to do. Just read Plouffe’s book, “A Citizen’s Guide to Beating Donald Trump.” They even boastfully predicted days before how the vote count would roll out on election night and for several days later. Trump would lead early, and Biden would surpass late, they said.

They were right. Why?

First and foremost, they usurped the powers of GOP-controlled state legislatures in the five battleground states and rewrote the rules of how votes would be cast and counted, using the pandemic as an excuse.

Mail ballots could be sent to everyone, even if they didn’t ask for one, and wide swaths of Americans could vote by mail. Voter ID requirements could be suspended for those who felt homebound by COVID’s wrath. Mobile ballot boxes could be deployed. Spoiled ballots that legally were supposed to be discarded could be “cured” by election clerks. Legally required voter roll purges could be skipped. And a single billionaire could donate $350 million directly to the election clerks, judges and vote counters in the states, requiring them in some cases to register voters, and create more poll locations in Democratic strongholds.

And Republicans — who controlled the legislatures in Wisconsin, Michigan, Pennsylvania, Georgia and Arizona and the constitutional right to set the rules — hardly put up a fight. Instead, they urged their voters not to take advantage of the loosened rules and to vote the old-fashioned way. They, in the words of the Trump-loving Georgia Democrat Vernon Jones, simply unilaterally disarmed.

……To be fair, Donald Trump mustered — by a mile — the largest national vote ever assembled by a Republican at 75 million-plus voters and barnstormed the country, risking COVID and criticism without fear. Kevin McCarthy picked an all-star slate of candidates and picked up seats. Mitch McConnell raised a ton of money, and Ronna McDaniel put together one of the most impressive get-out-the-vote efforts ever assembled.

But all that could not overcome the advantage of a rewired electoral system in the five battlegrounds, as the Georgia runoffs showed Tuesday, said Tom Price, a former congressman and Trump Cabinet secretary.

Democrats “leap-frogged Republicans’ process, strategy, technology and tactics, and that is to the credit of folks on the Democratic side,” Price told Just the News. “They have perfected harvesting, I believe it is harvesting, of absentee ballots, and I think the numbers will show in these runoff races, the same as they did in November, that Republicans who lost by close margins won the vote on Election Day, won on early voting in person and lost heavily in absentee ballots.”

Secondly, liberals spent two decades building an alliance with the mainstream media, the social giants and the search giants and the permanent government bureaucracy until they could control the narrative, even when it wasn’t true. They had it perfected by the time Donald Trump took office.

Those who objected were canceled and shamed. Intelligence and law enforcement and private investigators were misused to create false realities. True facts and legally protected speech were outright censored long enough to create the narrative needed to win.

Every recipient had to deliver very specific outcomes to keep getting money, governed by lengthy contract-like documents. And the outcomes and deliverables were mapped to the two larger goals of controlling the narrative and the rules of the election.

That’s what interviews with three dozen experts revealed. So what do those same experts advise Republicans do to change their fortunes?

Exactly what the Democrats did. Don’t point fingers, change the rules, and own the narrative, they said.

Phill Kline, the former Kansas attorney general, led the Amistad Project’s efforts to challenge some of the Democrats rule changes. He said the GOP legislatures in the key battlegrounds must reassert their constitutional right to set the rules of election.

Universal mail ballots can be ended, limited only to those who absolutely need it. Voter IDs can be mandated. Exemptions and legal settlements could, by law, be required to be approved by the legislature. Setting the rules of the election are easy if there is a will, Kline added.

……Secondly, conservatives need to build their own information ecosystem that rivals what liberals have: a vibrant press that covers conservatives honestly, and powerful delivery channels that can rival YouTube, Twitter and Facebook.

New services like Rumble, Parler, Real America’s Voice, Citizen Free Press and CloutHub are incubating and attracting millions. They need to be grown and spread to tens of millions along with trusted news sources so conservatives have as big a bullhorn to the next generation of GenZ, millennials and cable-cutters as they have had to Boomers, talk radio and Fox News fans, the experts said.

……Finally, conservative donors need to have a new approach, stolen from the ROI model of the Soros and Bloomberg NGOs, so their millions don’t just enrich consultants but have measurable outcomes in setting the rules and narratives that win the next elections. Everything from civic education and empowerment for state legislators to media-platform building needs to be funded, the experts said.

“Funding on the left seems much more strategic than funding on the right, which is predominantly tactical,” explained Steve Hantler, who advises several high-net-worth conservative donors. “Liberal elites have for decades controlled the levers of power in education, media and entertainment and have used that power to indoctrinate generations of Americans against America’s founding values.

I don’t care what the GOP does next. They are just as corrupt as the Dems, and I’m finished with supporting any political party.