Conway, who left the organization in August, was responding to Kurt Bardella, who served as Lincoln Project senior adviser before announcing his resignation last week.

“Just shut it down already … it’s over,” Bardella tweeted in response to a report by 19th News that Lincoln Project leaders had known about sexual harassment allegations against co-founder John Weaver in March of last year.

……According to the 19th News report, “Sarah Lenti, a managing partner with the group who was previously its executive director, knew about the allegations against Weaver as early as May 2020. Lenti confirmed that some of the group’s co-founders knew about the allegations as early as March 2020. [Steve] Schmidt and [Reed] Galen were among those who knew, multiple sources said.”

In another major development, journalist Ryan James Girdusky claimed in an appearance on “The Ingraham Angle” Monday that he has spoken to a second minor who has accused Weaver of sexual harassment. Unlike the first minor, who is now an adult after he was allegedly victimized as a 14-year-old, the second minor is still underage.

The Lincoln Project announced Monday that it had retained the law firm Paul Hastings to conduct an investigation into Weaver’s alleged conduct. Several lawyers from the firm donated thousands of dollars to the PAC during the 2020 election cycle.

That’s how much the anti-Trump Lincoln Project, lately embroiled in a series of highly public scandals, sent to a communications firm owned by the treasurer of the Lincoln Project itself, according to federal election expenditure records.

That sum represents just shy of 25% of the entirety of the super PAC’s receipts, which have totaled around $90 million since its inception in late 2019. The group, formed by veteran Republican operatives in a bid to prevent the reelection of President Donald Trump, sought to leverage its funds to run anti-Trump attack ads and sway enough voters to hand the election to Joe Biden.

The group’s financial arrangements have been a matter of public record since last year, though they have received widespread media attention only in the last several weeks, since shortly after Biden’s inauguration, when reporters began digging into sexually inappropriate messages one of the group’s co-founders, John Weaver, had been sending young, male political job hopefuls.

That scandal — including questions regarding how much the group’s leaders knew of Weaver’s behavior — has largely overshadowed the Lincoln Project’s financial arrangements. That may be changing now, as federal records indicate that the major part of the group’s whopping fundraising proceeds have been funneled to consulting firms controlled by the PAC’s own founders.

In addition to the $20,800,000 that went to treasurer Reed Galen’s firm Summit Strategic Communications, over $18,750,000 has gone to the firm Tusk Digital, run by group co-founder Ron Steslow, according to Federal Election Commission records. 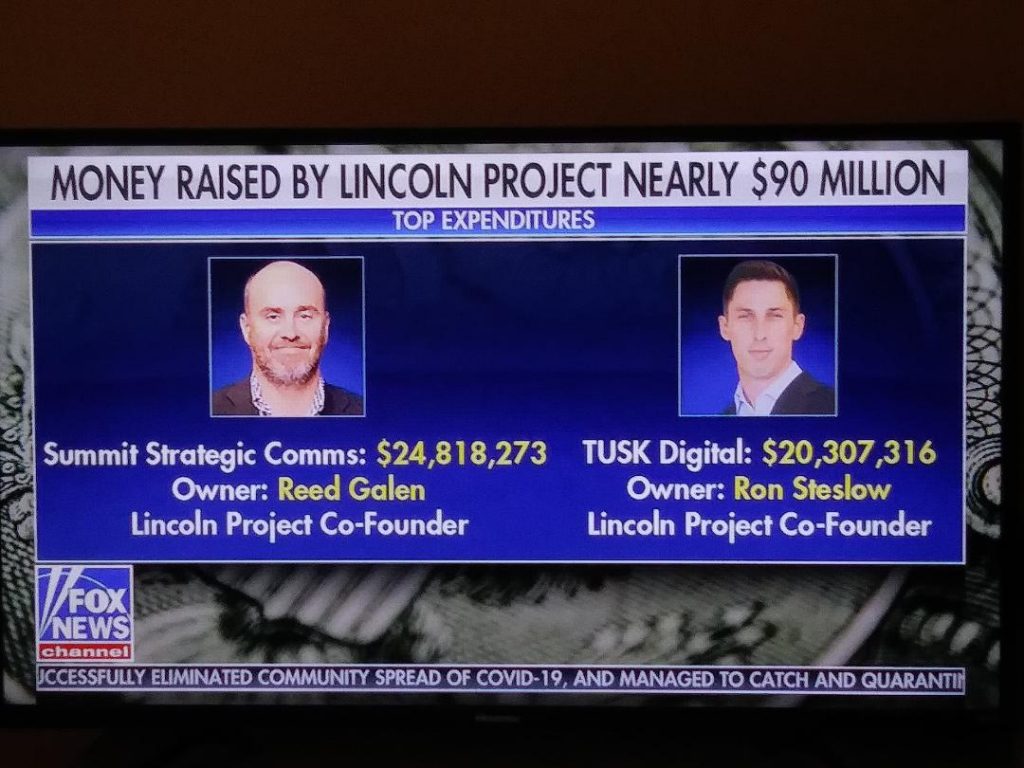 The Lincon Project is a group of virulent ‘never-Trumpers’ and former Republicans-turned-leftwing tools. The organization includes unhinged luminaries George Conway, Rick Wilson, Steve Schmidt, Jennifer Rubin, and Bill Kristol.  The election of President Donald Trump sent them over the edge of the ‘woke’ cliff.  They’ve hooked up with wealthy left-wing operatives who donate to their cause. One of their latest tactics was to peddle Iranian lies meant to aid Biden.

They also compiled an “enemies list” of Trump officials and staffers.

They lined their pockets with donors’ money and groomed young boys.