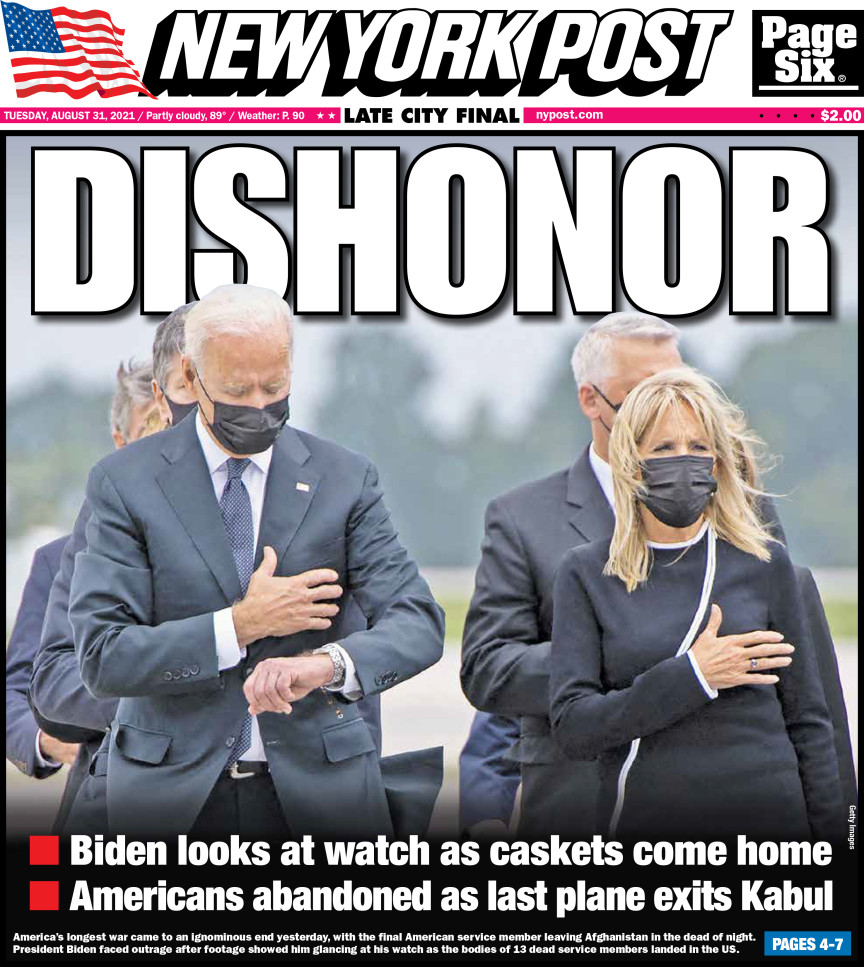 Fallout for Joe Biden following the death of 13 U.S. military personnel Thursday amid a chaotic, disorganized, and ultimately disastrous pullout from Afghanistan continued Sunday as grieving Gold Star families met with him at Dover Air Force Base.

After meeting with the families and as he was leaving the base, Mark Schmitz, the father of 20-year-old Jared Schmitz, one of the 11 marines killed in the suicide bombing near a checkpoint leading onto the international airport at Kabul, told the Washington Post that as families were getting on a bus to leave a distraught woman yelled in Biden’s direction, “I hope you burn in hell! That was my brother!”

As for Schmitz, he was also critical of his meeting with Biden, who appeared to try to make it more about him than the grieving families.

“When he just kept talking about his son so much it was just — my interest was lost in that. I was more focused on my own son than what happened with him and his son. I’m not trying to insult the president, but it just didn’t seem that appropriate to spend that much time on his own son,” Schmitz said.

Joe Biden lost his son Joseph “Beau” Biden III to brain cancer in 2015; the son had also served a year in Iraq with the Army judge advocate corps as a captain.

Others who met with the president were equally critical, including Roice McCollum, whose brother Rylee, also a marine, was killed in the attack.

“The president brought up his son, Beau, according to her account, describing his son’s military service and subsequent death from cancer,” the Post reported. “It struck the family as scripted and shallow, a conversation that lasted only a couple of minutes in ‘total disregard to the loss of our marine,’” the paper quoted Roice as saying.
“He cannot possibly understand. My dad and I did not want to speak to him. You cannot kneel on our flag and pretend you care about our troops,” McCollom told the Post.

“You can’t f*** up as bad as he did and say you’re sorry. This did not need to happen, and every life is on his hands. The thousands of Afghans who will suffer and be tortured is a direct result of his incompetence,” she continued.

Rylee’s mother Kathy McCollum also lashed out at Biden when she called into the “Wilkow Majority” talk radio show on Friday after getting the news that her son had been killed.

“20 years and six months old. Getting ready to come home from freaking’ Jordan to be with his wife to watch the birth of his son. And that sackless, dementia-ridden piece of crap just sent my son to die. I woke up at 4’o’clock this morning to marines at my door telling me my son was dead.”

Finally, the president was also condemned by families who stood outside near him as their fallen loved ones were removed from a C-17 transport plane because he kept checking his watch.

“Looks like he was being inconvenienced by having to show some respect for these American Heros [sic],” Samuel Williams, a disabled US Army veteran, said on Twitter.

Biden’s son Beau was a REMF. He was a JAG lawyer.  Not much risk in that. When it comes to sympathy, it’s all about him.

A grief-stricken Colorado mother whose son was killed last week in Kabul pinned the blame squarely on Biden and those who voted him into office, declaring “you just killed my son.”

Kathy McCollum, whose son, Marine Corps Lance Cpl. Rylee McCollum, was one of the 13 U.S. service members slain Thursday at the Hamid Karzai International Airport, lashed out the next day at the president in an emotional call to SiriusXM radio host Andrew Wilkow.

“My son was one of the marines that died yesterday,” Ms. McCollum said on “The Wilkow Majority,” which airs on the Patriot channel. “Twenty years and six months old, getting ready to come home from fricking Jordan to be with his wife to watch the birth of his son, and that feckless, dementia-ridden piece of crap just sent my son to die.”

The distraught mother continued: “My son is gone, and I just want all you Democrats who cheated in the election or who voted for him legitimately, you just killed my son.”

“I never thought in a million years he would die for nothing, for nothing, because a feckless, dementia-ridden piece of crap decided he wanted a photo op on September 11,” she said. “That’s what kills me. I wanted my son to represent our country, to fight for my country. But I never thought that a feckless piece of crap would send him to his death.”

This lady really lets him have it: 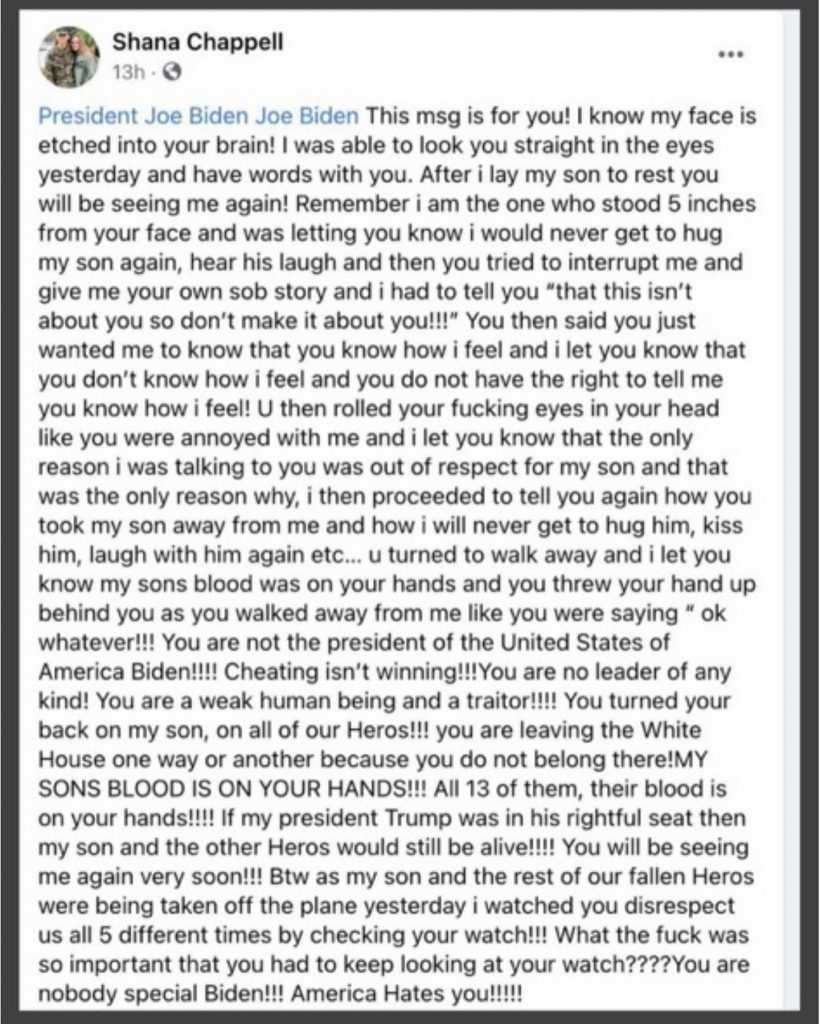 Right before Biden was installed, I predicted that his incoming regime would be a disaster.  His incompetency was on full display during the G7 and his representatives at the meeting with the ChiComs in Alaska, had the Chinese in stitches.

The Dems have no shame. They foisted this sorry sack of shit into power and refuse to accept responsibility for the carnage.  They heave bile at anyone who dares to criticize the cuck-in-chief.