Zucker’s network discusses their agenda every morning at 0900hrs.

“This is yet another investigation Project Veritas has conducted into CNN, and once again they’ve demonstrated their partisan political agenda and total disconnect with journalistic ethics,” said Project Veritas founder and CEO James O’Keefe.

Here are some of the comments made on the CNN calls about President Trump:

CNN President Jeff Zucker: “This is a president who knows he’s losing, who knows he’s in trouble, is sick, maybe is on the aftereffects of steroids or not. I don’t know. But he is acting erratically and desperately, and we need to not normalize that.”

Zucker: “You know, this is what we’ve come to expect for the last three and a half years, four years, but it clearly is exacerbated by the time that we’re in and the issues that he’s [Trump] dealing with. I think that we cannot just let it be normalized. He is all over the place and acting erratically, and I think we need to lean into that.”

Stephanie Becker, CNN field producer: “On the issue of why it’s important to get the transition going right, the 9-11 report talks about one of the problems was that the trouble that was brewing that lost during the transition. So, if you want a good, concrete example of what happens when you don’t have a good transition, well, look at the Twin Towers.”

Does Becker think that muzzie terrorists wouldn’t have attacked this country on Gore’s watch? That scrunt has a very short memory. The first attack on the World Trade Center was in 1993 when Gore was VP and Bubba Clinton was president. Clinton’s approach to terrorism was a total failure.

CNN President Jeff Zucker also told his employees to go after Lindsey Graham during one of the 9 a.m. calls.

“Frankly, if we’ve made any mistake, it’s been that our banners have been too polite, and we need to go well after Lindsey Graham,” he said.

“There’s a ton going on. Let’s stay strong. Let’s stay newsy. Let’s stay urgent. Let’s be smart. There is a lot of news out there, and Lindsey Graham really deserves it,” he said.

David Vigilante, CNN’s General Counsel said Tucker Carlson is a racist and that Fox News enables Carlson to host a white supremacy hour every night on their channel.

“Yeah, I was just going to say, if you’re going to talk about the story, I think it’s unavoidable that you have to talk about the naked racism of Tucker Carlson. Because that’s really what drove this anti-diversity push, you know, Trump watches Tucker Carlson’s show and then reacts. And just as sort of the white supremacy hour they have on Fox News every night, I think it’s the — You can’t disconnect the two,” he said.

“These statements made by high-up executives at CNN prove that they are simply not interested in being unbiased when reporting on the news,” O’Keefe said.

“CNN likes to call themselves ‘the most trusted name in news,’ but how can the public ever trust a network that routinely bashes people simply because those people hold certain political views that are not aligned with the mainstream media?” he asked.

“Calling Tucker Carlson a racist and demanding CNN employees to attack Lindsey Graham is outrageous and unprofessional behavior,” he said. 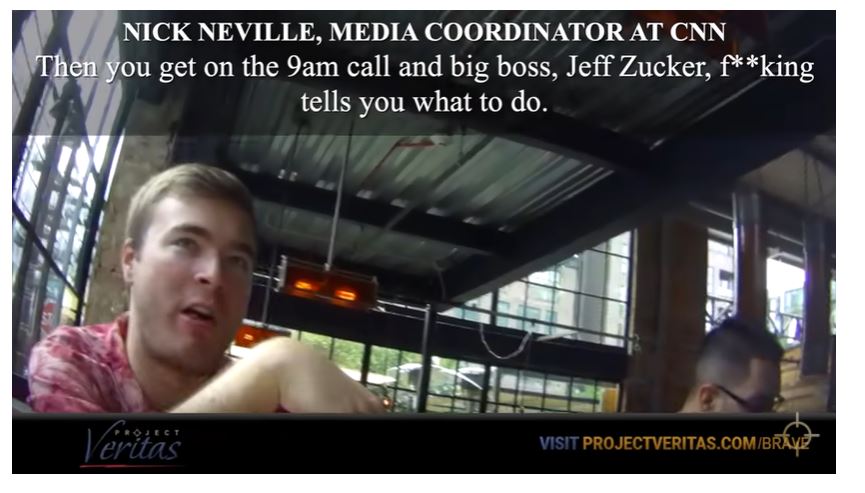 Zucker probably shit his pants when O’Keefe interrupted one of the conference calls and introduced himself: 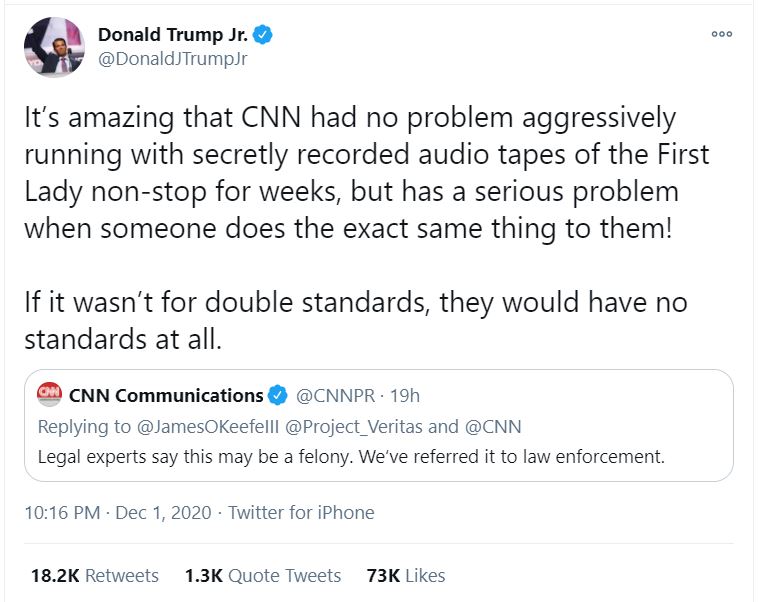 CNN hacks hate conservatives, hate Trump, hate the country, and anyone who doesn’t trust their network.

This is the leftwing cable news network that calls itself the “most trusted”:

Like the rest of the liberal drive-by media, CNN pushed the ‘racist Covington students’ lie.

Former MI6 reprobate Christoper Steele relied on an unverified report from a CNN website to support the fake Trump dossier.

A CNN producer admitted that the Trump-Russia collusion story was bullshit, but they kept pushing it for ratings.

CNN hack Andrew Kaczynski drove an innocent man to suicide when he spread false information about the man as one of the Boston Marathon bombers.

CNN shill Brian Stelter admitted that he allowed anti-gun nut David Hogg to lie during an interview because “passion versus policy”.

Two of CNN’s ‘reporters’ were caught staging (READ: creating) the news; one literally made up a muzzie ‘peace protest’ in London, another used a CNN camera operator as a fake protester after President Trump won the 2016 election.

A black radical CNN host encouraged an Antifa mob to attack innocent people for no other reason than that they might have voted for Donald Trump.

CNN used to be a half-way decent network back in the 80’s when it engaged mostly in straight reporting and kept its opinion segments separate.

Since then, it devolved into a cesspool of agitprop-spewing moonbats.