American political prisoners have been held for more than 8 months in solitary confinement in 7X10 cells for 23 hours a day. These people have not been convicted of any crimes, they are being held in “pretrial detention” for trespassing the capitol halls of corruption on 6 January 2021. Their trials have not been set. They have been denied bail. They are not allowed to meet with lawyers in private. They have one hour a day for “exercise”, showers, and phone calls. They have been denied due process.

Patten and Booth belong in jail.

Julie Kelly, a journalist at American Greatness, covered the hearing: 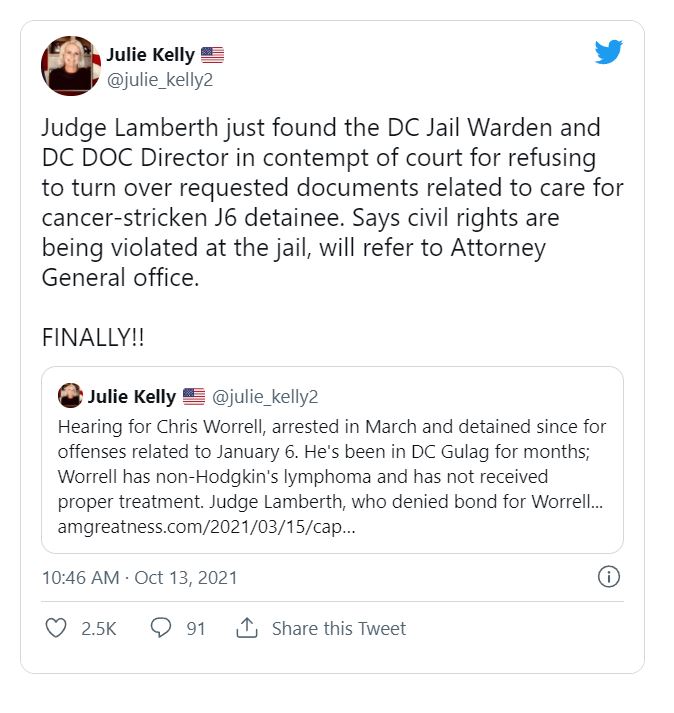 Her coverage of the hearing makes for a must-read thread.

“Hearing for Chris Worrell, arrested in March and detained since for offenses related to January 6,” Kelly wrote. “He’s been in DC Gulag for months; Worrell has non-Hodgkin’s lymphoma and has not received proper treatment. Judge Lamberth, who denied bond for Worrell earlier this month ordered jail officials to provide medical records on Worrell. They did not comply in time.”

She detailed the treatment – or lack thereof – that Worrell was receiving in prison: 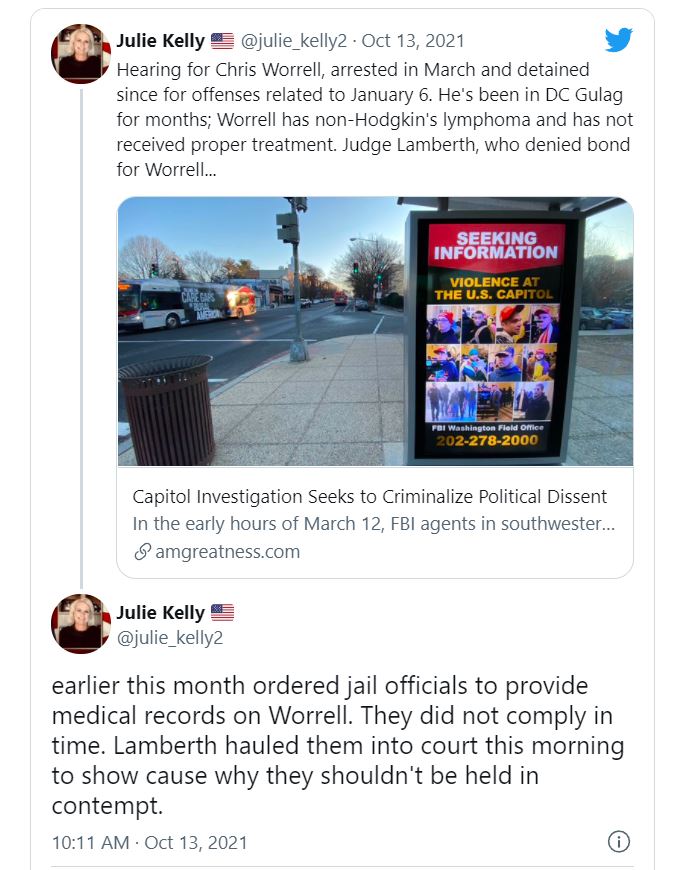 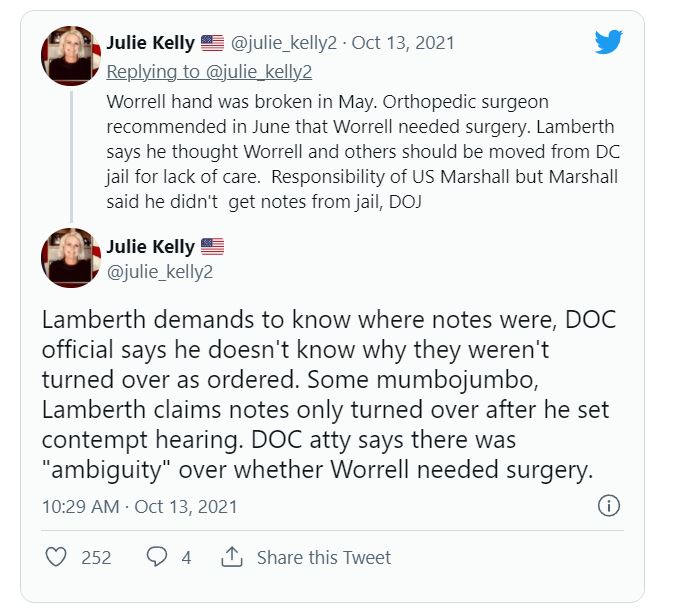 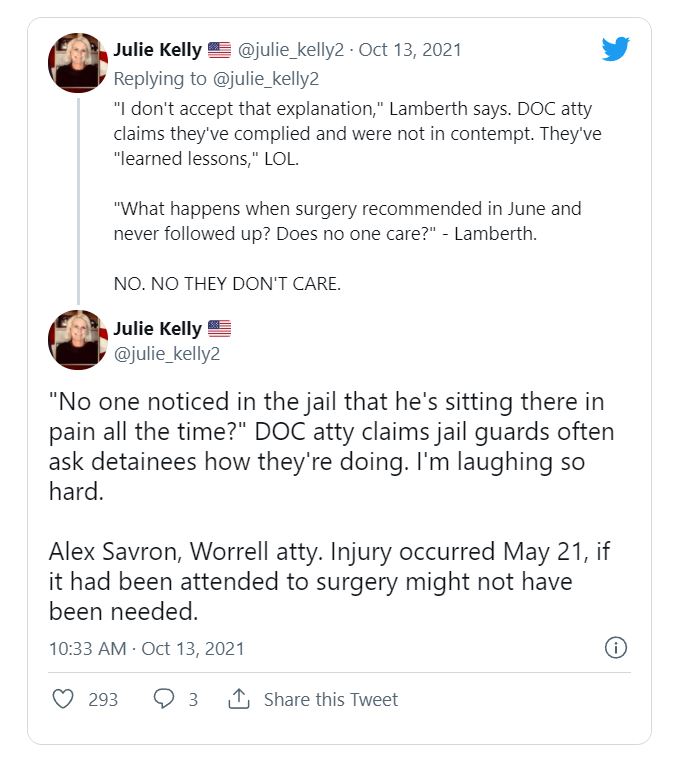 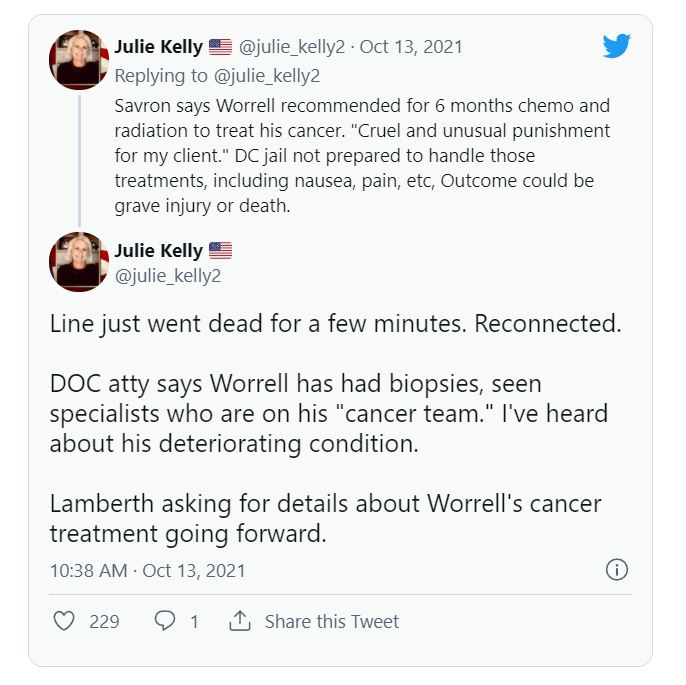 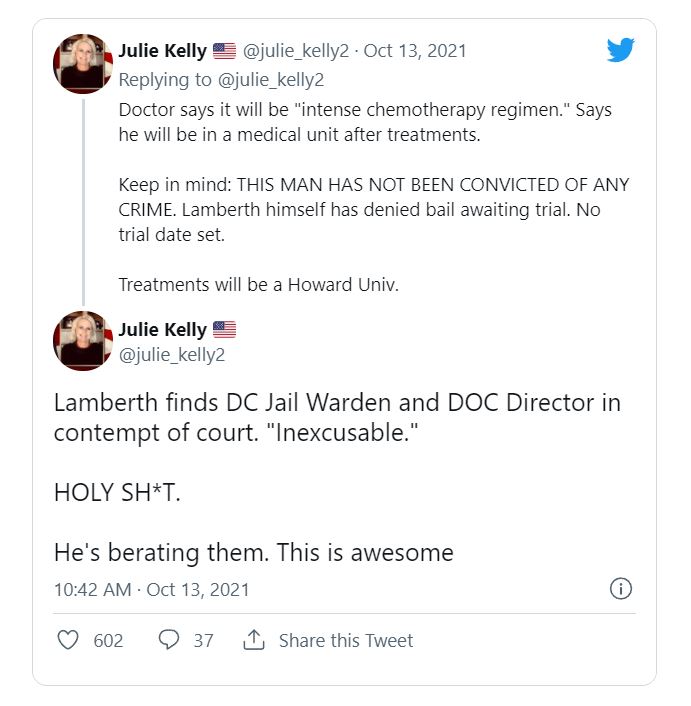 The 6 January protesters have been beaten and isolated by the guards.  Lawyers for one, a man called Ryan Samsel, say he was beaten so badly he has a skull fracture and is now blind in one eye.

Since 6 January, FBI jackboots targeted an innocent man for attending President Trump’s 6 January rally, raided the wrong home in Alaska looking for Nancy Pelosi’s laptop, arrested a man for standing inside the capitol and waving a Trump banner, confiscated a Lego set from an “insurrectionist” and asked that citizens turn in their “extremist friends and relatives“.

The leftwing media and Dem politicians call them “terrorists” and ran to their psychoanalyst for therapy.

Yet, the Antifa/BLM goons responsible for the destruction of businesses, police stations, and courthouses, have skated out of any legal consequences for their crimes.  The Feds refuse to prosecute.

Hordes of angry leftists have stormed the state capitols of Georgia, Wisconsin, and the Hart Senate building.  Sandy Cortez led a group of protesters that stormed Pelosi’s office in 2018 for hours until Capitol Hill Police arrested 51 of the protesters for unlawful entry and protest; a stunt that was praised by the media.  None of them were arrested or subjected to Shawshank conditions.

The Dems have created a system of bullying and persecution of political opponents. This shit usually happens in Communist countries and Banana Republics. It’s happening in America.