A newly-released Navy training video teaches sailors to use the “right” pronouns, “show that we’re allies,” and create “a safe space for everybody,” while instructing service members on how to proceed after having “misgendered” someone.

The official U.S. Navy video posted by Air Force Staff Sergeant John Vannucci, according to The Defense Visual Information Distribution Service (DVIDS), begins with two rainbow-clad hosts — both Navy civilians — introducing their personal pronouns and announcing they are there “to talk about pronouns.”

“Using the right pronouns is a really simple way to affirm someone’s identity,” one host says. “It is a signal of acceptance and respect.”

In order to “go about creating a safe space for everybody,” the host suggests using “inclusive language.”

The other host then explains “another way that we could show that we’re allies and that we accept everybody” when she suggests including pronouns “in our emails” or when introducing oneself.

If one has “misgendered” another, she continues, “correct yourself and move on or you accept the correction and move on.”

“What happened to our Navy?” he asked in another tweet.

“Here’s an idea, fire everyone in the Navy who puts pronouns in their email signature and focus on how to be better at war,” wrote Republican Texas congressman Dan Crenshaw.

“For God’s sake, stop this stupidity,” he added.

“While China is building the world’s largest navy- including the launch of a  supercarrier last week- #Democrats focus on #GenderStudies and #CRT training for our military. China must be petrified,” wrote U.S. Rep. Billy Long (R-MO).

The clip comes amid nationwide attempts at pandering to the LGBTQ+ community since the start of “Pride Month.” 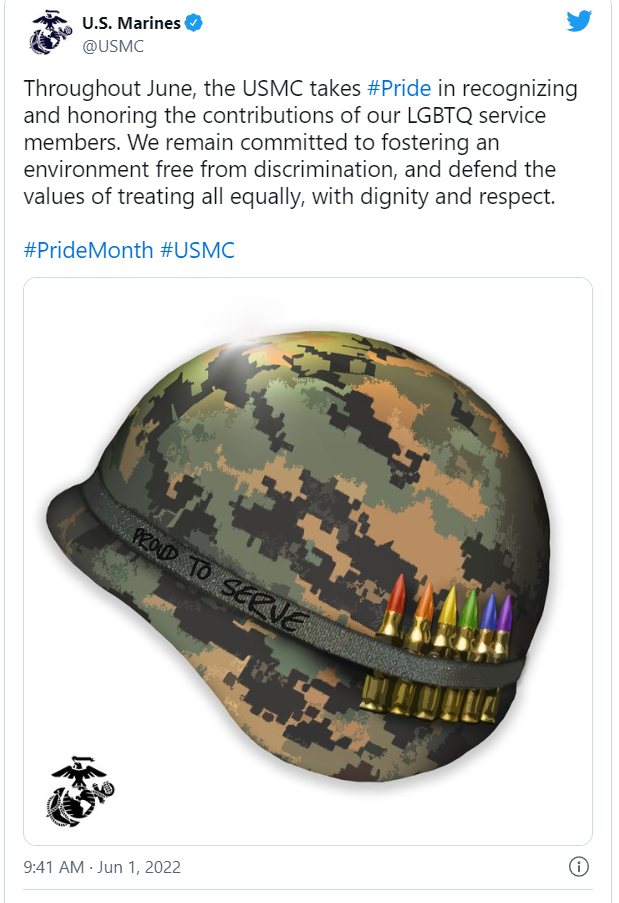 The United States Air Force tweeted out a graphic with the hashtag “#CELEBRATEPRIDE” and a female airman saluting with rainbow colors on her hand to celebrate the beginning of Pride Month.

“Happy Pride Month! We are the best #USAF by leveraging the diverse backgrounds & strengths of each member of our total force. We are committed to making the #AirForce a place where we all can reach their full potential. #PRIDE #PrideMonth,” the tweet read. 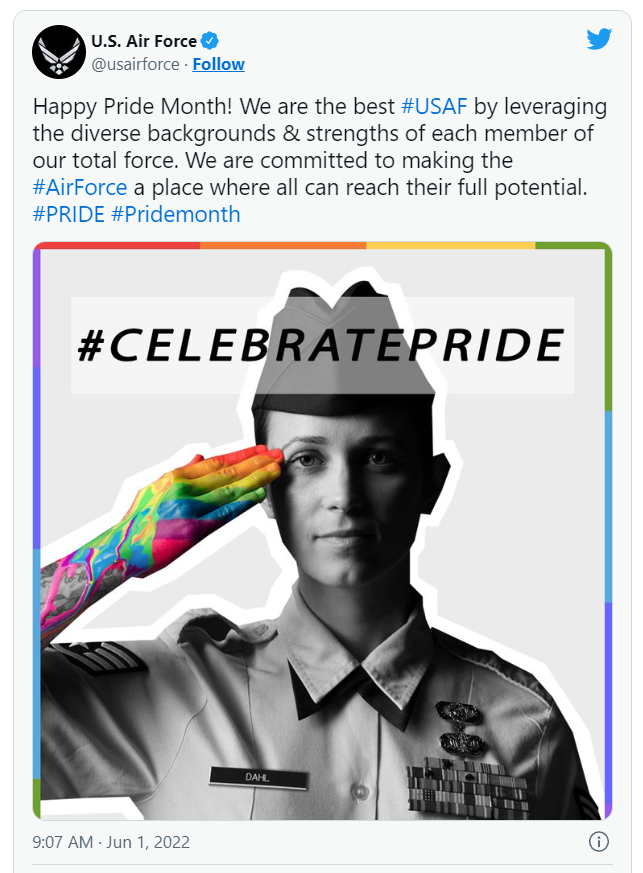 The Space Force also tweeted out a Pride Month message.

“Maj. Gen. Leah Lauderback spoke on how the LIT is working to change policy, change minds, and create opportunities for LGBTQ+ members of the military during an interview with @airandspace. #PrideMonth2022,” the branch said, including a link to an article on the Smithsonian Air and Space Museum’s website.

“LIT” stands for the LGBTQ Initiative Team, a working group formed last year by the Air Force and the Space Force. Lauderback is the director of LIT.

Warrior ethos has been replaced by psychobabble and corrupt social engineering. Soldiers are supposed to understand enemy tactics and study great military strategists ( i.e. von Clausewitz, Patton, Sun Tsu), not worry about driving a wedge between themselves and their fellow troops with divisive racist policies.

While the Biden regime has the Pentagon pushing the “woke” shit rather than focusing on combat readiness, our enemies are laughing their asses off.  Instead of honing warfighting skills, West Point cadets are being pummeled with “Critical Race Theory”. One of the instructors forced cadets to call cops “murderers”.

Forget combat readiness. You better make sure you have the pronouns straight.

I am SO GLAD I retired in 2006. I can just see myself running afoul of the grotesque out-of-control PC Nazis in the military hierarchy.