The chief diversity, equity and inclusion officer for the Department of Defense’s Education Activity (DoDEA) disparaged white people in a number of previous tweets that have come under new scrutiny this week.

Kelisa Wing is an author and self-described “woke administrator” who was selected in December of last year to serve as the DEI chief for the DoDEA. DoDEA provides K-12 education to DoD dependents.

Wing is outspoken about her “woke” political views, having coauthored children’s books like “What is White Privilege?” “What Does it Mean to Defund the Police?” and “What is Anti-Racism?”

In one June 23, 2020 tweet, Wing wrote “I’m so exhausted at these white folx in these PD sessions this lady actually had the CAUdacity to say that black people can be racist too….I had to stop the session and give Karen the BUSINESS…we are not the majority, we don’t have power.” 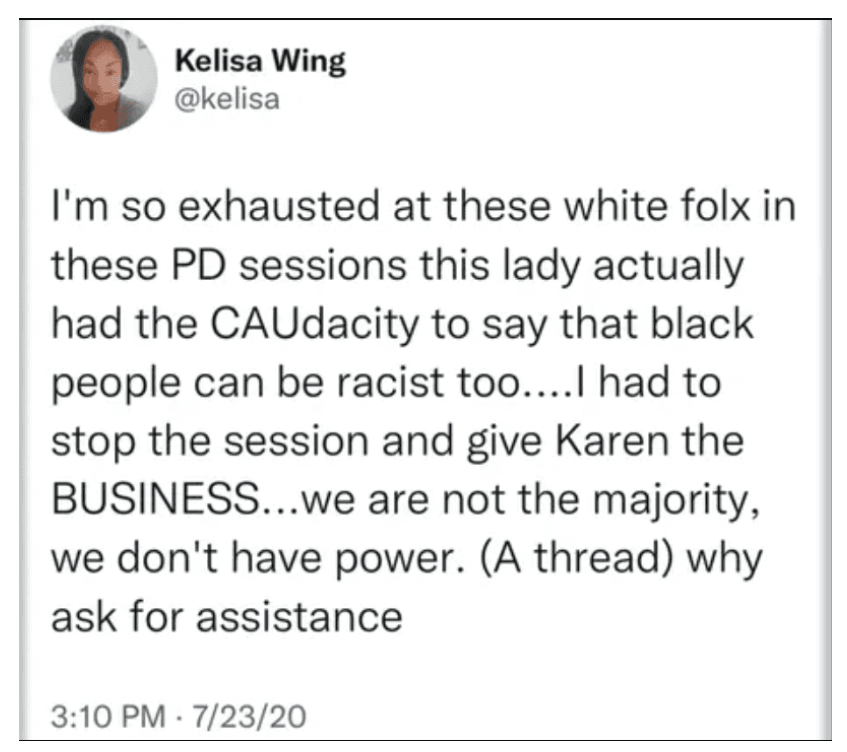 ……“I am exhausted by 99% of the white men in education and 95% of the white women,” Wing said in another tweet. “Where can I get a break from white nonsense for a while?”

……Wing’s book “What is White Privilege?” also calls on white kids to “unpack” their “backpack” of privilege. The children’s book further cites an article by Peggy McIntosh that said that White women are “justly seen as oppressive” and “enjoy unearned skin privilege” and laments that her training as an educator didn’t teach her to herself, a white woman, as “an oppressor, as an unfairly advantaged person, or as a participant in a damaged culture.”

After Fox News resurfaced the old tweets, they reached out to Wing for comment. She did not immediately respond, but her Twitter account has since been placed on “private” mode.

I keep hearing the phrases  “white privilege” and “check your privilege” every time one of you racist spokes-pimps vents your spleen.

I want to know where the hell I can get mine. My environment was far from prosperous. I come from a working-class family in a racially ‘diverse’, economically depressed neighborhood. My mother raised 7 kids by herself. We all worked. My two older sisters worked two part-time jobs, and my mother worked to make ends meet. It was a hell of a struggle. I joined the Army at the age of 18 and served a total of 30 years (20 Active, 10 Reserves).  My skin color didn’t exempt me from two combat tours in Iraq. My Associate’s Degree was earned at a community college because that’s all my GI Bill and pocket could afford. My pension is still not enough to cover all the bills, but I still have Social Security. Whoopie. No one gave me a free meal ticket because I’m a hyphenated ‘Caucasian’. Some people may have a terminal case of white guilt, but I have no reason to feel guilty. I’m Irish, Scots, German, and Cherokee. I will never apologize for my ancestry, heritage, or skin color. Get over it.

Anyone who has a problem with that can kiss my bare white ass.

I am SO GLAD I retired in 2006. I can just see myself running afoul of the grotesque out-of-control woke Nazis in the military hierarchy.

While the military is busy getting “woke”, Russia and China are rattling sabers and engaging in actual military threats.