Facebook took its “fact-checking” to comical extremes when it “fact-checked” a critique of itself by the Federalist’s Molly Hemingway.

She scrutinized the ‘fact-checker’ for its decision to fact-check stories about documented voter fraud in Georgia, so Facebook’s “fact-checkers” disputed the facts.

From her article at The Federalist

A Big Tech-backed “fact” “checking” outfit claimed to debunk explosive evidence in support of Republicans’ claims of significant election problems at a Thursday Georgia Senate hearing. It didn’t. Not even close.

Newly discovered security footage from Georgia’s State Farm Arena showed dozens of ballot counters, media, and Republican observers leaving en masse at the same time from the ballot-counting area for Fulton County. After they left, a small remnant of about four workers began pulling trunks containing thousands of ballots from underneath a table with a long tablecloth and running them through machines.

The footage supported claims from Republicans that they were told counting had stopped for the night, only to find out hours later that it had kept going on. You can and should watch the 12-minute portion of the testimony from Jacki Pick here.

On Friday morning, a group called Lead Stories published a “hoax alert” falsely claiming to have debunked the security video. The Washington Post, Newsweek, and other outlets followed along, criticizing non-leftist journalists for giving the video traction. In fact, none of the claims made by the Republicans were debunked.

Lead Stories’ “fact” “check” says government officials told them everything was fine with the counting, that the ballots were in “containers — not suitcases,” and that “party observers were never told to leave because counting was over for the night.”

Leaving aside whether relying solely and uncritically on government officials’ claims constitutes anything close to a “fact” “check,” let’s look at the claim that party observers were never told that counting was over for the night. In Lead Stories’ regurgitation of the government officials’ claims, only the people who cut open the absentee ballot envelopes were sent home, while ballot counters and scanners were retained and kept working — and no one told the press or other observers they were done counting. 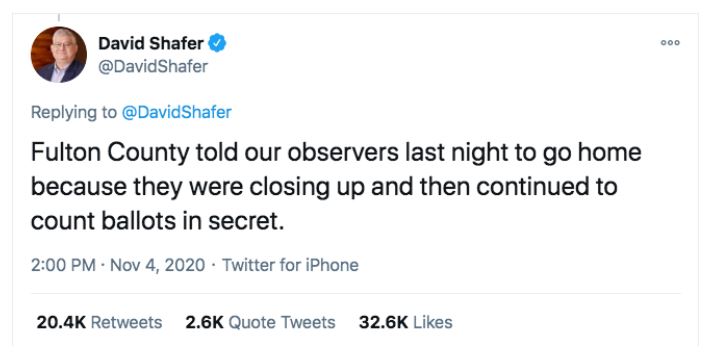 That claim, which he has repeated consistently, is backed by sworn affidavits from two Republican observers, who further allege they were kept an unreasonable distance from the ballots even while they were at State Farm Arena, making it completely impossible to meaningfully do their jobs. (The video, which shows the room from four different angles, fully supports the claim that poll watchers were kept away from meaningful observation of ballot handling.)

OK, so on the one hand you have sworn affidavits from observers saying that supervisors told ballot counters to go home for the evening shortly after 10 p.m. and a video showing everyone leaving en masse at that time. And on the other hand, you have two government officials promising that no one was told that counting was over. Is there any other evidence to consider?

Well, on election night, ABC News reported that ballot counters were sent home at the time that the Republican observers said everyone was told counting had stopped. Their source? Regina Waller: 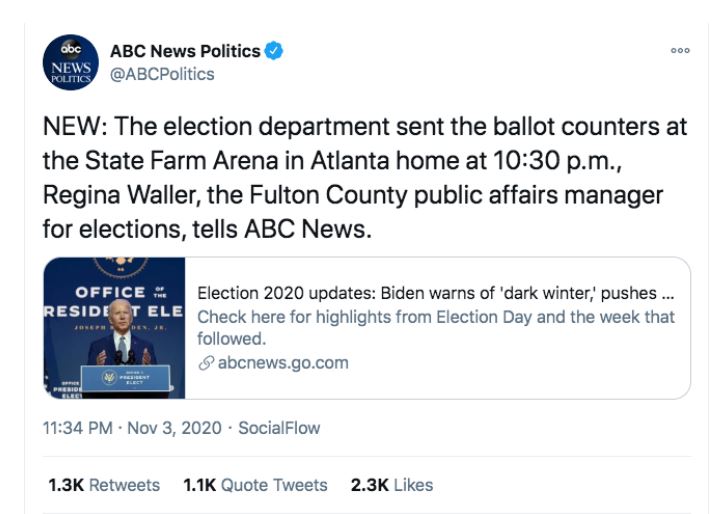 Local NBC journalists on site that night independently confirmed “they were told counting was done for the night” and given no indication it would continue before the next morning. The Atlanta Journal-Constitution even reported of a “plan” to stop scanning ballots at the same time the poll watchers said things were shut down…..

……While conspiracy theories about election fraud abound — ranging from The New York Times’ claim that there was no election fraud anywhere in the entire country to dramatic claims of a global conspiracy involving voting machines, the Trump campaign’s official claims are sober and serious. State Republican Chairman David Shafer and President Donald Trump filed a criminal complaint in state court on Friday regarding tens of thousands of votes that they say were fraudulent.

Trump and Shafer allege, for example, that votes came from:

……In a Kafka-esque twist, Facebook is now using Lead Stories to censor this story critical of Lead Stories.

Big Tech censorship has reached totalitarian proportions. Twitter, Facebook, YouTube, and Google have made a concerted effort to squelch any reporting about the massive voter fraud and ballot tampering.

Speaking of tampering, Facebook used ‘secret internal ranking’ of news sites to suppress “right-wing” sources after the election. This was done by  an “emergency change” to its algorithm to tamp down on news and posts from some sites and pages, identified by The New York Times as mostly right-leaning sources, from spreading what the platform deemed to be “election misinformation.”

Get a load of Facebook’s “fact-checkers”:  The site’s main “fact-checker”, Lead Stories,  is full of  Democratic Party donors and former CNN employees.  It’s also paid through a partnership with TikTok, a social media platform run by a Chinese company that owes its allegiance to the Chinese Communist Party (CCP). TikTok currently is being probed by U.S. officials as a national security threat.

All of them, including the liberal mainstream media, are in the tank for Biden. They have a visceral, psychotic hatred of President Trump; they spent the last four years regurgitating hate and physically assaulting Trump supporters.

If Biden gets in the White House, they’ll be his personal State Media, just as they were with the Obama regime.