So why is Twitter causing such emotional strife in the government and in the media? Well, they were the junkies and their drug dealer just got killed. Elon Musk now runs the corner with new rules and new prices. And the junkies are screaming, “This just isn’t fair.” But it is……

But when you’re used to preferential treatment, you always complain when the fields are finally level. That’s what you’re seeing. With Twitter changing, the media is losing their lie insurance. Twitter was to the media what cow farmers are to McDonald’s. What college football is to the NFL. What KFC is to Joy Behar’s ass. It was the assembly line of approved opinions to bolster their ideologies. Listen to this White House reporter begging the White House to say that they’ll get involved.

WHITE HOUSE REPORTER: This is a critical moment, really, in terms of ensuring that Twitter does not become a vector for misinformation. I mean, are you concerned? Who is it at the White House that is really keeping track of this?

KARINE JEAN-PIERRE: Social media companies have a responsibility to prevent their platforms from being used by any user to incite violence, especially violence directed at individual communities, as we have been seeing. And the President has been very clear on calling that out. He’ll continue to do that. And we’re going to continue to monitor the situation.

Monitoring the situation. Can you blame them for freaking out? It’s like pulling a rattle out of a teething baby’s mouth and saying, “No more, you whiny little brat.” Remember, in the old days, journalists had beats. They covered local government, crime, sports. Back then, no one covered soccer. You had to call people and get quotes and write a story based on your notes and a little notepad.

But that changed with Twitter. Tweets replaced beats, and now they think those tweets are gone forever. And it’s scary because journalists relied on Twitter to tell them what to think and what the news was. Which is like getting your drinking water from your neighbor’s septic tank. But if it trended on Twitter, they jumped on it quicker than me on a story about a trans teacher with giant boobs.

……The media let the loudest, most irrational people guide them. Twitter provided the opinions, which is why you hear the same ones over and over again in the media. Not one original thought. That’s bad for political discourse, but great for forcing people to say men can have babies……

Meanwhile, Twitter’s previous bosses axed anything that would interfere with a biased narrative. You know, like a story about a certain crackhead and his laptop. Now you see why these hacks are so terrified. They might have to actually work for a living. Musk took their cheat sheet away and they’re already in full meltdown mode.

So it’s weird. How did a media come to find a person who’s expanding free speech to be so dangerous? Well, this is what happens when one defines disagreeableness as hate speech and hate speech, then, as a crime. Because then free speech becomes a crime for allowing disagreeable speech. So they don’t want what Elon wants, which is a town square, unless they could run it like Tiananmen. They wanted a private club with a velvet rope that kept scrubs like you out.

It’s why a tiny percentage of Twitter users were responsible for nearly all the tweets. And those are the people you see in panic mode. You know, a rocket scientist named Alyssa Milano, a nuclear physicist named Rob Reiner, a world-renowned heart surgeon named Debra Messing. But it’s no surprise they’re mad. Now we’ll be able to see when their pants are on fire.

And we’re already seeing how Musk is planning to expose their prior failures, too. On Monday, he tweeted, “The Twitter files on free speech suppression, soon to be published on Twitter itself. The public deserves to know what really happened.” So he’s clearly alluding to Twitter censoring the New York Post’s Hunter Biden laptop story before the 2020 election. A story that the rest of the media is finally admitting was true all along. When it’s safe to. Although it’s just in time for that new Hunter Biden Christmas special that I’ve been hearing about. I can’t wait.

Former Twitter CEOs Dorsey and Agrawal created an exclusive enclave for intellectually and morally bankrupt proglodytes. They got used to discarding free speech as they saw fit.

The Left is having grand mal seizures. The virtue signaling assclowns are having a stompy feet temper tantrum now that they’ve lost control over a Big Tech site that used ‘algorithms’ and a dedicated censorship department to ban conservatives and anyone else who questioned the covid lockdowns, the vax, and suppression of the Biden laptop.  Reporter and author Alex Berenson was banned after the Biden regime contacted Twitter execs and demanded he be removed. 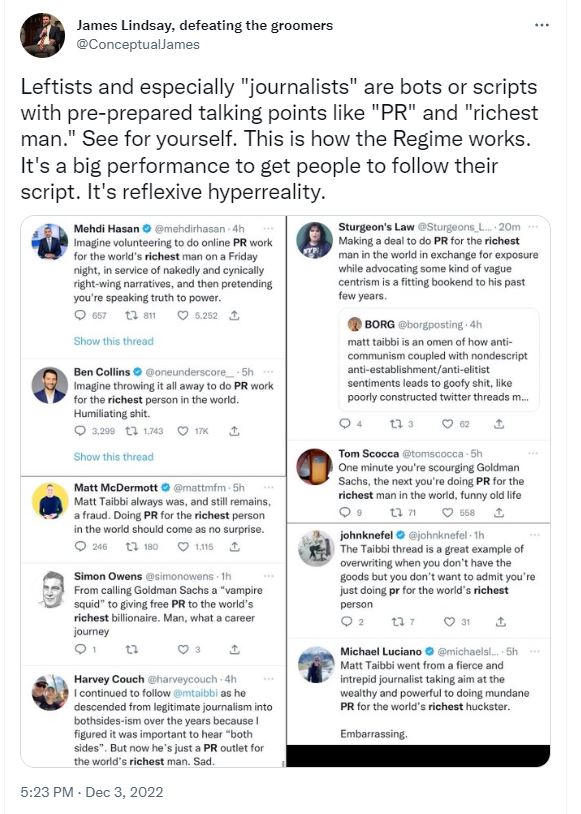 Musk stated that his goal is to promote free speech, allow raucous controversial debate, and autonomous expression in a common digital town square.