The California Leftists love this shit. The more anti-American and Islamofascist, the better. The California shithole is a prime example of what happens when liberals have control over the political landscape.

Ammar Campa-Najjar, an Arab-Hispanic Muslim, isthe grandson of a muslim terrorist, has advanced to California’s 50th Congressional District general election after winning the March 3rd primary election. He will face Republican Darrell Issa on November 3rd 2020. Ammar was also a candidate in 2018 but was defeated by Duncan Hunter.

Ammar Campa-Najjar is the grandson of Muhammad Yusuf Al-Najjar ​ (aka Abu Yusuf), a senior member of the Palestinian terrorist organization ​ Black September , which carried out numerous terror attacks including the Munich massacre where 11 Israeli Olympic athletes were tortured, castrated, and massacred during the 1972 Summer Olympics ​​. His grandfather was the leader of that attack.

In 1973, Mossad ​ agents killed Yusuf al-Najjar and his wife in Beirut in retaliation for the attack​. Campa-Najjar’s father is Yasser Najjar, a former Palestinian Authority official.

……Campa-Najjar allegedly is tied to Muslim Brotherhood and had been endorsed by Council on American Islamic Relations (CAIR). Not surprisingly, he also supports Bernie Sanders for president. 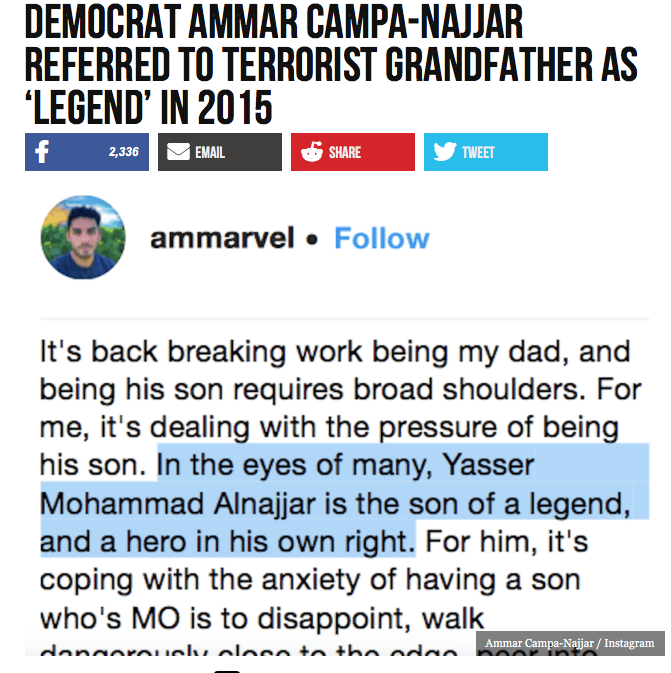 ……It seems his grandfather is not the only terrorist connection that Ammar has. Ammar attended the same mosque as three of the terrorist that carried out September 11th terror attacks in 2001.

In 2012, Ammar served as Deputy Regional Field Director for Obama’s re-election campaign. After the election, he worked in the Obama administration as an official at the Labor Department. Ammar was endorsed by Obama during the 2018 election.

The Left shields and defends Islam because they have a lot in common. The Dems have a lengthy history of siding with America’s enemies.

They’ve got a small but vocal contingent of muzzie radicals including Ilhan Omar (D-MN), a radical muslim who took her oath of office on a Quran, has expressed abject hatred for Israel, and wants it wiped off the map.  She has friends who joined the Somali terror group al-Shabab, she served as an Advisory Board member for the Minnesota branch of the terrorist-connected CAIR and held fundraisers for them.

Rep. Keith Ellison (D-MN), who served as the deputy chair of the DNC, is an anti-Semitic radical muslim with ties to multiple terrorist facilitators and organizations such as the Nation of Islam, CAIR, and the Islamic Society of North America.  He also accepted campaign contributions from leaders of the Muslim Brotherhood.  Ellison takes the misogyny in the Quran quite seriously, especially when he abuses former girlfriends.   Just think, this shitbag has just been elected Minnesota Attorney General.

Rashida Tlaib, U.S. Rep. from Michigan (where else?)  is a rabid anti-Semite who says that the Holocaust gives her a ‘calming feeling’.  In 2006, Tlaib wrote an OpEd for Louis Farrakhan’s Final Call publication. Tlaib spoke at an American Muslims for Palestine (AMP) event in Washington, where she stated that she typically felt “more Palestinian” while doing her work in Congress than she felt anywhere else.  Oh yeah, and like a good piece of muzzie excrement, she swore in on a Quran and wore a Palestinian flag to her victory celebration.

Islamofascist terrorists attacked America on 9/11 and inflict carnage worldwide for their allah.  Now they sit in our government.