I usually post a list of nominees, but this year there were two candidates who did so much to deserve it that there was no need for any preliminaries. 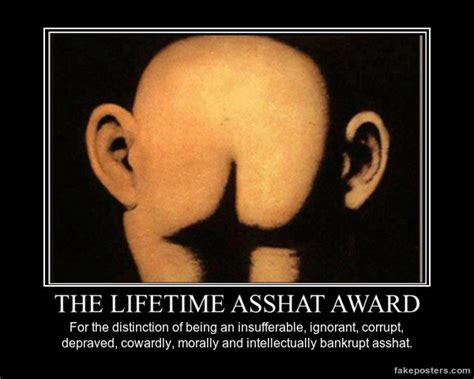 This year’s Asshat Award is presented to:

The 62,611,250 intellectually and morally bankrupt douchebags who reinstalled him for four more years of socialist economic and foreign policy train wrecks.

As “Warden” from Ace of Spades sums up:  “He’s hateful, divisive, and duplicitous. He wants to harm us, to destroy our culture, our prosperity and our national pride”.

The Left thrives on his malfeasance, and the “gimmiedats” don’t care.

Time Magazine, one of Obama’s most prolific knob gobblers, named him “Person of the Year”.  Listen to the soundtrack provided while you look at the cover, to get a good taste of the love fest:

It was all about “revenge”, wasn’t it?   Over half of the voting population reached the apex of stupidity.

Apparently, only one former Obama supporter wasn’t buying his bullshit.

To the winners: You’ve earned it. Wear it with pride.