For the past 2 years parents have witnessed New Jersey schools going overboard in the name of “Diversity, Equity and Inclusion.” When the schools start decorating the entrance of the local elementary school with children’s art that displays the virtues of being “POLYSEXUAL”, you know things have just gone too far.

Last week, we reported on “safe space” posters project, displayed in the main entrance of the North Hanover Township Elementary School District, celebrating all different definitions “sexuality”, drawn by the 4th to 6th graders. This is surprising coming from, North Hanover, a conservative/military town with Republican legislatures. Mom and BOE member, Angela Reading alerted parents on Facebook as to what was transpiring in the school’s hallway.

Suddenly, our United States military became heavily entangled in this scandal. A high ranking official, Lieutenant Colonel Christopher Shilling, stated that the Joint Base (McGuire, Fort Dix and Lakehurst) leadership is now working with local law enforcement to ensure the “safety” of the entire community. 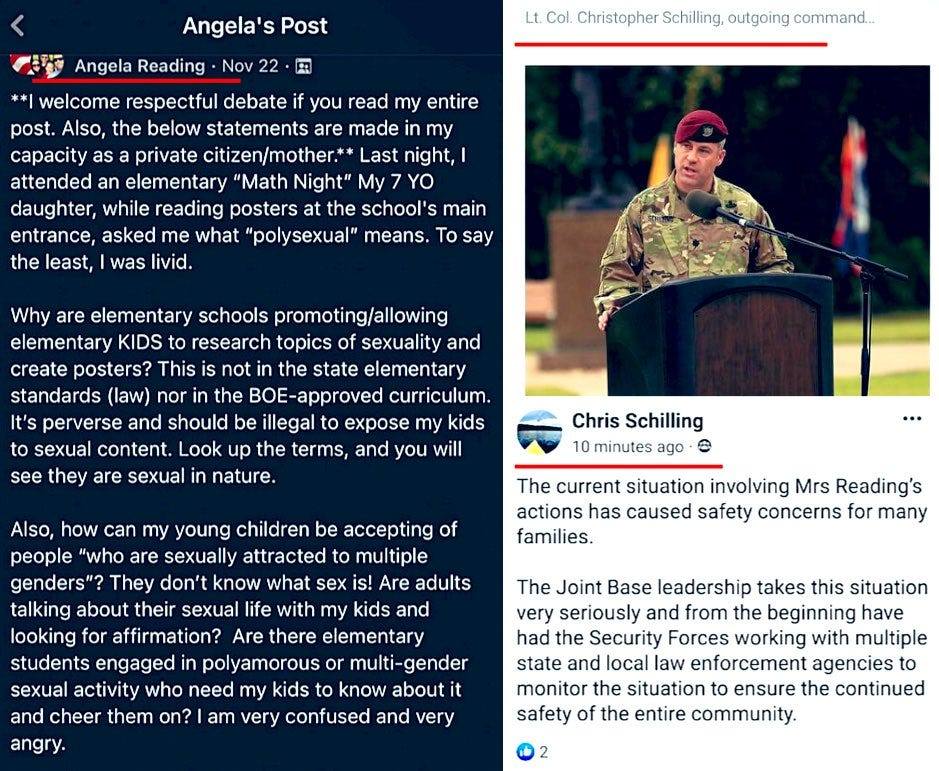 Lt. Col. Shilling seems to imply Angela Reading has endangered the entire community by being a concerned parent/whistle blower and informing parents as to what is being displayed in the entranceway of the elementary school. Many parents, who have learned about the inappropriate posters created by the 4th – 6th graders, have posted to Facebook because it is so alarming.

This is the excuse he gives for his actions: Its shocking that an active military Lt. Colonel is so heavily involved with the police that he is able to speak as an official regarding the investigation and threats to Angela.

How much influence does the Joint Military base have over the local police in North Hanover? How closely are they working together to investigate citizens that use their freedom of speech? And what would possess the Lt. Colonel to reveal the grade/classroom of Angela’s minor child on Facebook if he is busy keeping the community “safe”?

Additionally, Lt. Col. Shilling is putting a target on the back of Angela and her minor child by speaking on behalf of the military, against her and revealing the grade of her child. This incompetent action made by a military official concerned Angela Reading so much that she pulled her children from the school yesterday with no plans to return. She feels as though Lt. Col. Shilling has now endangered all kids in North Hanover Township with his reckless and aggressive behavior.

The children are 4-6th grade so that it makes it okay.

Leftwing indoctrination in America’s schools has become a malignancy. Kids are being groomed and sexualized by perverted LGBTQABCDEF (insert the rest of the acronyms here)  and pedophiles who use their teaching positions to push this shit on K-12 children.

Parents are fed up and fighting back.

The assclowns in the North Hanover PD got involved because apparently, there’s no serious crimes or real community safety to worry about.

Where in the fuck does LTC Christopher Schilling get off harassing a mother who is concerned over the sexualizing of her child in elementary school. The military has no fucking business sticking its politicized nose into the private business of a parent. This kind of shit happens in communist countries and Banana Republics.

Schilling is the quintessential reason why military recruitment has hit rock bottom. No one wants to join the armed forces and be subjected to the unconstitutional vax tyranny and the “woke” bullshit infecting the military.  The armed forces are being depleted of anyone capable or willing to fight.  The Biden regime and the current crop of proglodytes in the pentagon are hellbent on pushing an agenda that turns the military into mush.  The ChiComs and Russia present real threats to the West, but the U.S. military is busy getting “woke”.

Warrior ethos has been replaced by psychobabble and corrupt social engineering. Soldiers are supposed to understand enemy tactics and study great military strategists ( i.e. von Clausewitz, Patton, Sun Tzu), not worry about driving a wedge between themselves and their fellow troops with divisive racist policies.

Instead of honing warfighting skills, West Point cadets are being pummeled with “Critical Race Theory”. One of the instructors forced cadets to call cops “murderers”.

Our enemies are laughing their asses off.

Forget combat readiness. You better make sure you have the pronouns straight.

I am SO GLAD I retired in 2006. I can just see myself running afoul of the grotesque out-of-control PC Nazis in the military hierarchy.