If a black SFC stopped a white criminal, you know the rest….

The video, circulating through social media with millions of views, shows an encounter between Pentland, who is white, and a black man on the sidewalk in The Lakes at Barony Place subdivision that has led to community outrage.

Deputies aren’t identifying the victim, who’s seen in the video getting pushed by Pentland.

The “victim” has been identified as “DeAndre“. 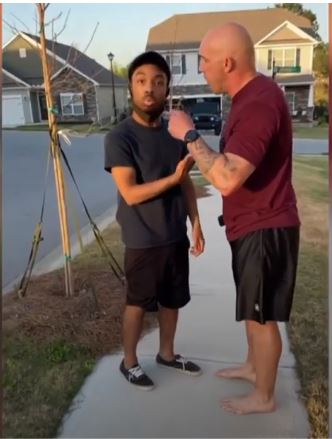 What prompted this were incidents in the neighborhood by “DeAndre”, who assaulted females on the street.

“Pentland has said he feared for his and his wife’s safety, and the young man is accused of earlier assaults,” The Washington Post reported.

According to one incident report, an African-American man approached a woman walking in the area on April 8, put his hand around her waist and then put her hand down the side of her shorts. The woman then pushed away and when she did, her shorts partially came down. As she pulled her shorts back up, the man put his arm around her waist for a second time, according to the incident report. The woman then ran back into her home.

A second incident report showed on April 10 a woman was walking when an African-American man approached her and picked up a baby who was with her. The woman said he tried to walk away with the baby but she grabbed the child back. She said this happened three times before she told the man it was not her baby and she “did not have the right to allow people to hold the child.” 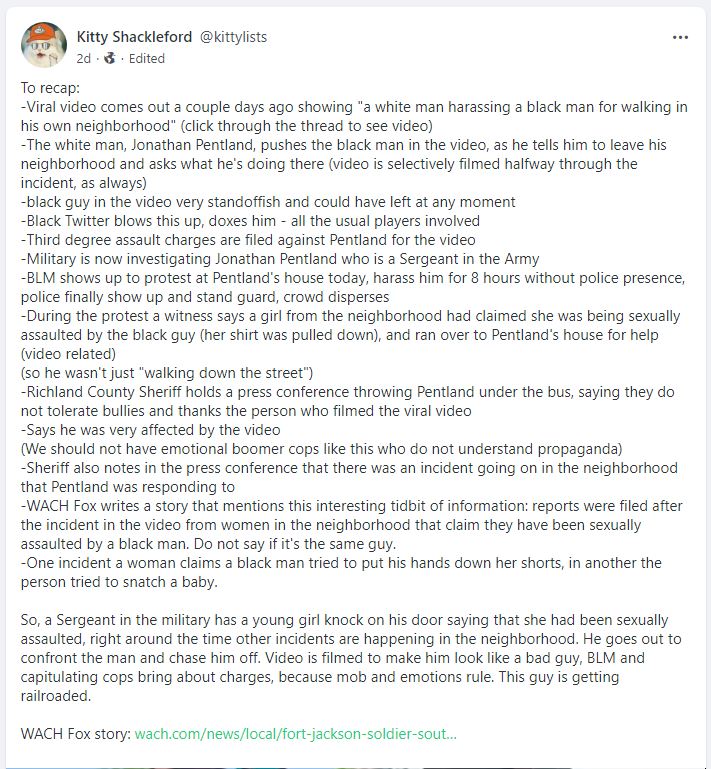 I wonder if the cops, who are so hell-bent on railroading SFC Pentland, will charge the Burn Loot Murder thugs for vandalizing his home.

While a lynch mob assembles for SFC Pentland, a butter bar Lieutenant refuses a lawful order more than NINE times during a traffic stop and the officer gets fired.

Sgt. Major of the Army Michael Grinston was blasted by two U.S. military veterans over a tweet in which he praised a black second lieutenant who was pepper-sprayed and forced to the ground for repeatedly refusing orders from two Virginia police officers to exit his vehicle.

Grinston was responding to a report that surfaced earlier this week regarding a traffic stop by Windsor, Va., officers, Joe Gutierrez and Daniel Crocker of Army 2nd Lt. Caron Nazario, who is black and Latino in December.

A video clip of the encounter that went viral online shows Gutierrez yelling at Nazario who is still sitting in his vehicle after it appears he’s been pepper-sprayed. Gutierrez demands that Nazario unbuckle his seatbelt and exit his SUV before he is then taken to the ground by both officers and handcuffed.

After the incident came to light, Gutierrez, himself a U.S. Marine Corps veteran, was fired and Nazario has since filed a lawsuit against both officers.

But full versions of the encounter from both officers’ bodycams paint a much different picture, as noted by former Tuscon, Ariz., police officer Brandon Tatum, host of “The Officer Tatum” podcast.

……Also, Tatum juxtaposed the officers’ bodycam video with selfie video taken by Nazario himself to suggest that the Army officer was attempting to entrap the officers who were stopping him.

Nazario failed to pull over for a mile-and-a-half after officers turned on their lights to signal him to pull over because his license plates were not properly displayed, which already led them to become suspicious.

Then, over the next several minutes, tensions only heightened when Nazario refused several loud commands to show his hands to officers and exit the vehicle, leading them to draw their service weapons.

All the assholes screaming for SFC Pentland’s head should be demanding punishment for Nazario. But we know that won’t happen.

The altercation is another excuse for black radicals and white liberals to wail about “white supremacy” and vent their spleens over “white extremists” in the military while ignoring the real extremists:  Islamic zealots and left-wing/Communist ‘social justice warriors’.  During the Obama regime, the Pentagon even threatened to prosecute anyone who espoused Christian or Jewish faith.  Soldiers are subjected to “white privilege” briefings and watching their Commanders kiss muzzie ass over “disrespect to the Quran”.  A DOD employee sent out an email declaring MAGA to be “white supremacy” and an Army Lieutenant Colonel at Ft. Campbell sent out an email accusing Christians and patriots of being “hate groups”.  Forget combat readiness; ‘gay rights’, drag shows, deference to Islamofascist theocracy,  demonizing the nation’s founders, and whatever hairstyle you want is the agenda.  No wonder China is laughing.

The violent outrage mob will drag this out for all the riots and carnage they can inflict until another tactic comes along.

While the ‘woke’ SJWs rage over the SFC Pentland/DeAndre incident, their own deplorable crime and murder rate is skyrocketing. Blacks are killed by the bushel in 10 major US cities, including Chicago, New York City, Baltimore, and Philadelphia.

But the perps aren’t white, so it’s okay.