UPDATE: Brandy Lee is backpedaling on a claim she made about a Republican senator secretly meeting with her to discuss President Trump’s ‘mental health’. BTW: She doesn’t have a license to practice psychiatry.

Accusations have been circulating on Twitter that the prominent Yale professor, known for her public diagnosis of President Donald Trump as having a “mental impairment” and who recently met with lawmakers on Capitol Hill to discuss the issue, isn’t actually a licensed psychiatrist.

In fact, Campus Reform discovered that according to the State of Connecticut, Lee’s “physician/surgeon” license expired in 2015, and her application for reinstatement has been “pending” ever since.

He’s successful, exuberant, brash, confident, thinks outside the box, and goes against the grain of the Swamp status quo.  The left-wing media CBS-NBC-MSNBC-ABC-CNN conglomerate was used to the maudlin symbiotic relationship they had with Obama. Trump’s take-no-prisoners approach literally has them in the throes of a grand mal seizure.  Even worse, he’s reversing the damage Obama did to America for 8 years.

Their desperation has reached pathetic levels, even for them. The latest tactic is to accuse Trump of being ‘mentally unfit’, and by extension, anyone who voted for him.

Some anonymous (it figures) Dem politicians actually consulted a Yale University psychiatry professor by the name of Brandy Lee,  who questioned Trump’s “mental health”.   That in itself is a joke considering the mental state of the unhinged Dems who are trying to impeach him. Witness the bizarre behavior of Sheila Jackson Lee, Hillary Clinton, and Nancy Pelosi, just to name a few.

This is all a matter of public record.

Sheila Jackson Lee (D-TX) is a raging psycho. Her latest act of petty childishness involves stealing a woman’s airplane seat and throwing the race card when the woman objected.

Her behavior is unpredictable and bizarre. She also berates her own aides.

During a 1997 visit to the Jet Propulsion Laboratory in California, Jackson Lee, who was then serving on the House Science Committee and on the Subcommittee that oversees U.S. space policy, asked a guide whether the Mars Pathfinder would be able to show an image of “the flag the astronauts planted there before.” When it was subsequently pointed out that the flag to which she was referring was in fact the one that Neil Armstrong had planted on the Moon—not Mars—in 1969, Jackson Lee complained that she was being mocked by bigots. “You thought you could have fun with a black woman member of the Science Committee,” her then-chief-of-staff wrote angrily in a letter to the editor.

In July 2010, Jackson Lee spoke at an NAACP meeting where she derided the Tea Party movement as a racist phenomenon, saying: “All those who wore [Klansman] sheets a long time ago have now lifted them off and started wearing, uh, clothing, uh, with a name, say, I am part of the Tea Party. Don’t you be fooled. Those who used to wear sheets are now being able to walk down the aisle and speak as a patriot because you will not speak loudly about the lack of integrity of this movement.”

While speaking from the House floor on March 12, 2014, Jackson Lee suggested that the U.S. Constitution (which was adopted in 1787) had been written in the early 1600s: “Maybe I should offer a good thanks to the distinguished members of the majority, the Republicans, my chairman and others, for giving us an opportunity to have a deliberative constitutional discussion that reinforces the sanctity of this nation and how well it is that we have lasted some 400 years, operating under a constitution that clearly defines what is constitutional and what is not.”

“And I want to say how proud we all are to be here with our chargé d’affaires Mary Kay Carlson from the American embassy in, in, in, in New Dehli,” Pelosi said, stuttering.

Her attempt at a joke fell flat.

“So I understand that this beautiful song about His Holiness’s 80th birthday is a wish that he lives to be 113 years old. I am sure that we all associate ourselves with that remark and I know it’s good news to the government of Beijing.”

The Dalai Lama stood motionless as the American delegation appeared to be the only ones laughing.

“When we see the sparkle in the eyes of the children yesterday in the children’s vision–uh, village,” Pelosi said.

It’s not clear whether the Chinese had a hard time speaking, according to her quote, or Pelosi herself.

Ending her speech, Pelosi referred to China as “Tina.”

Pelosi’s apparent seizures have happened before.

And here’s Hillary Clinton, criminal, pathological liar, and the Dems’ candidate for the 2016 presidential election. Her physical and mental health should have come under scrutiny by the media, but they were too busy propping her up:

As the presidential campaign enters its final stages, probing questions have emerged about the health condition of Hillary Clinton.

Hillary’ bizarre, erratic behavior on the campaign trail (culminating with last week’s perplexing “short-circuit” comment) has left many wondering whether she is seriously ill.  Hillary has at multiple times had convulsions that appear to be seizures on camera, including a series of seemingly inexplicable coughing fits.

A frequently referenced video, shown below, alleging that Hillary may have seizure-like conditions emerged several weeks ago and has so far failed to lead to a conclusive explanation of whether Hillary may have ongoing health problems and potential residual aftereffects from a blood clot in her brain sustained three years ago.

In January 2013, CNN reported that then-Secretary of State Clinton was treated with blood thinners at a New York hospital to help dissolve a blood clot in her head. Back then doctors were confident she would make a full recovery. Clinton was admitted to New York Presbyterian Hospital on Sunday due to the clot that was discovered during a follow-up exam related to a concussion she suffered this month, her spokesman, Philippe Reines, said. The clot was located in the vein between the brain and the skull behind Clinton’s right ear and did not result in any stroke or neurological damage, her doctors said in a statement.

Going further back,in 2005 then-Senator Hillary fainted during a speech in Buffalo, NY, where she received medical attention on site. “About five minutes into the speech, she said she was queasy,” said Erie County Democratic Chairman Len Lenihan, who was at the Women’s TAP fund-raiser at the private club. “Clinton left the podium and continued her talk sitting in a chair but eventually left the room, saying she needed a break, Lenihan said. She returned to the podium a short time later but fainted before resuming her speech. “It became clear she was faint. She was sort of brought down gracefully,” he said.

The room was cleared, and Clinton immediately received medical attention from, among others, a doctor who attended the event.

And so, questions about Hillary’s health remain, especially after photos emerged over the weekend showing Hillary demonstrating unease while climbing stairs.

This has led to further speculation about the identity of a man, allegedly part of her secret service, who some has been dubbed as her “handler”, a person who is supposedly her personal doctor.

Look at her zombie-like behavior.  He had to rush on stage and bring her back to earth.

California Rep. Maxine Waters called Secretary of Housing and Urban Development Ben Carson a “white-wing” racist. He’s black, for the uninformed.  She also claimed that conservatives who believe in free markets, sovereignty, and the rule of law, want to kill her:

“I think we should focus on domestic terrorism also,” she asked terrorism experts during a House hearing Wednesday. “So I would like to ask again, given all that you have said about how difficult it is and about privacy concerns, do you have any thoughts about what can we do to begin to deal with the KKK, the white nationalists, the extremists, the alt-right?”

That was a fair enough question, I suppose, given that white nationalists and extremists do present a threat to the American people. Though to be clear, they represent only a meager 0.03 percent of the population, according to Roger L. Simon of PJ Media.

But it’s what Waters said next that ought to concern anyone who believes the mentally disturbed should not be serving in Congress.

“They’re on the Internet, they’re Breitbart — if you look at the YouTube, you see how much they want to kill me and others,” she said. “What can we do?”

Hank Johnson D- Ga, declared during a hearing that Guam would tip over and capsize if too many people resided on the island, and he’s also a flaming anti-Semite who launched into a tirade against Israel, comparing Jewish people who live in disputed territories to “termites” that destroy homes. He’s a member of the House Armed Services Committee. That’s fucking scary.

A pharmacist who delivers prescriptions to members of Congress revealed that he delivers Alzheimer’s medication to Congressmen who don’t even remember that he was there the day before or the last time.  Wanna bet Pelosi, Johnson, and  Jackson-Lee are among his customers? Hillary probably has her own private pharmacist.

The leftwing meltdown started the day of Trump’s election and gets better every day.  They don’t even care how stupid they look, they just keep spewing.

By the way, Lee is bona fide nuts herself:

If it were possible, Dr. Bandy Lee said, “we would be declaring a public health emergency that needs to be responded to as quickly as possible.”

“As more time passes, we come closer to the greatest risk of danger, one that could even mean the extinction of the human species,” she said.

BTW: These are the kinds of nutbags who claim Trump is “mentally unfit”: 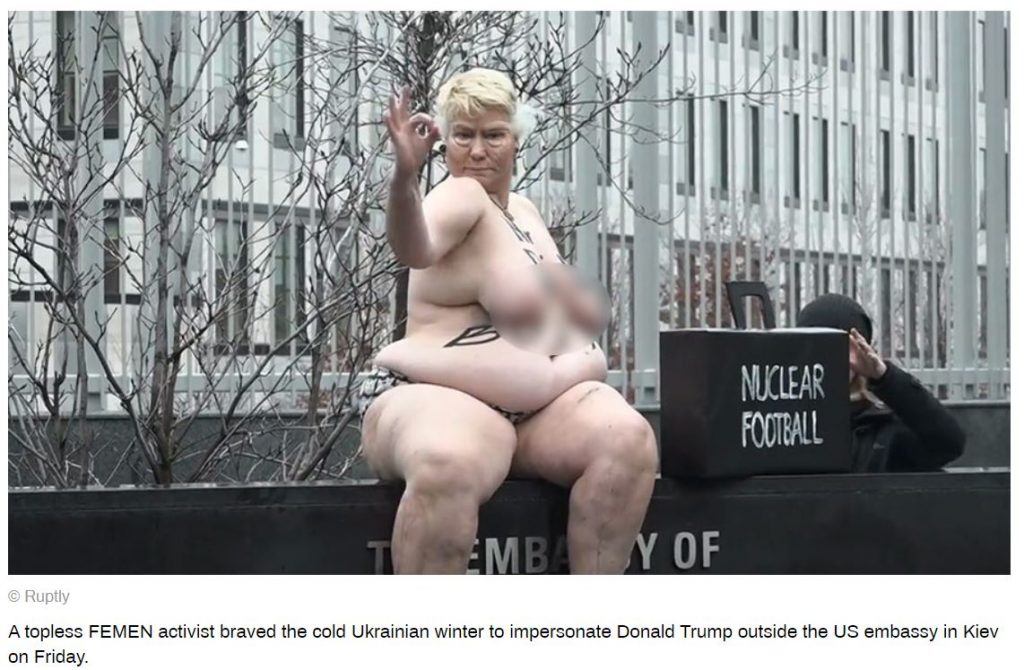 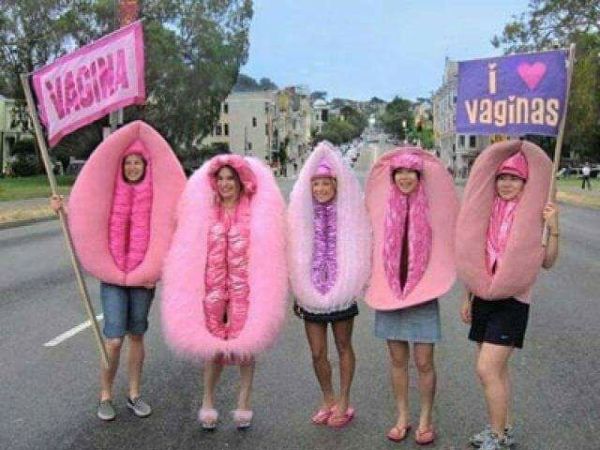 Liberals who ‘scream at the sky’  because Trump got elected.

Dysfunctional morons who think this planet has 51 genders.

The liberal meltdown since Trump was elected.

‘Trigger warnings‘ and ‘safe spaces’ for ‘microaggressed’ snowflakes.  These little children are stuck in adolescence and are in serious need of psychiatric help.

And the standard death threats: 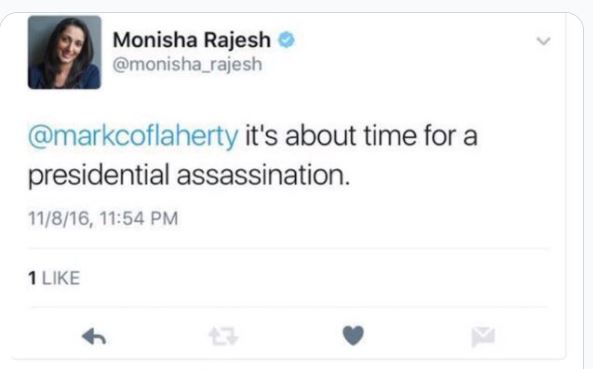