Now that their corrupt, addlebrained White House occupant has overstayed his welcome, they admit what we’ve all known for the last two fucking years.

Maybe this was yet another “pause” for CBS News, eh? 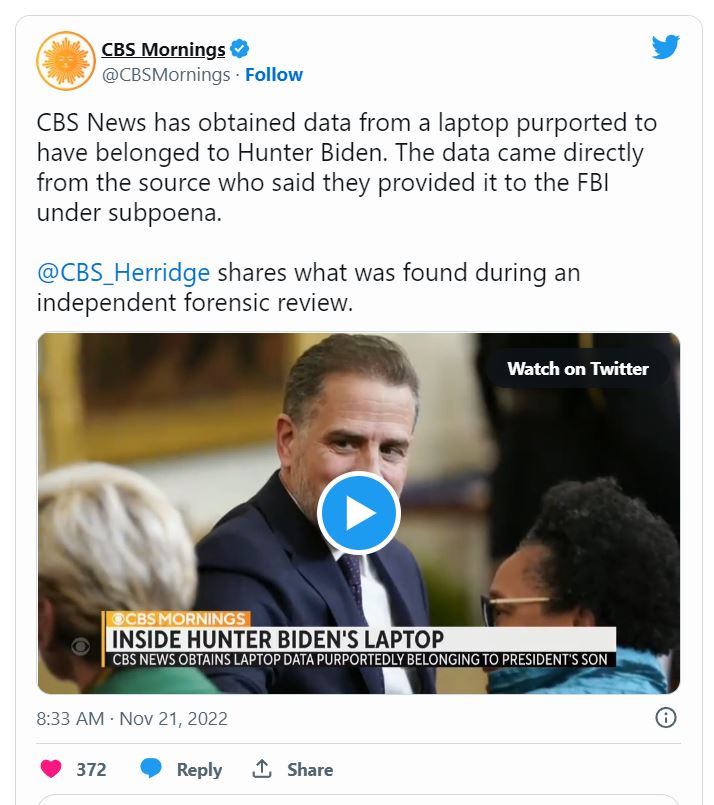 No offense to Catherine Herridge, who does excellent work on the national security beat, but these are leftovers — and ancient at that. This story should have run a couple of years ago, when the New York Post first reported on the laptop and had outside experts do precisely what CBS News finally got around to doing now. Herridge doesn’t mention that in her report.

Nor does she mention the fact that other outlets had long since reported exactly what CBS News purports to reveal here. Even among the mainstream media, this is nothing new; the New York Times reported eight months ago that the Department of Justice had authenticated the laptop data. The Washington Post followed up two weeks later to report the same thing. The DoJ’s long investigation into Hunter Biden on the basis of the laptop would implicitly prove the authenticity of the data anyway; if it was fake, the DoJ would have long ago closed out their probes.

This looks more like a clean-up for CBS News, especially after its ridiculous and virtue-signaling “pause” on Twitter over the weekend. CBS News helped suppress the Hunter laptop story and its obvious implications of corruption in October 2020, promoting Biden’s claims that it was “Russian disinformation” rather than seriously look at the data and the efforts of others, notably Tony Bobulinski, to make people aware that the data was authentic. This weekend, CBS News offered a sneering and hypocritical pose about concerns over “disinformation” on Twitter — and now they want people to overlook their 25-month “pause” on objective reporting on Biden Inc’s corruption.

The media and the weaponized apparatchiks in the FBI and the DOJ spun, denied, covered up and buried every disclosure of the unsavory crimes and corruption by the Biden Family Crime Syndicate.

Mark Zuckerberg did his part by collaborating with the FBI to censor discussion about the incriminating evidence to help rig the 2020 election.

The DOJ and the FBI are corrupt to the core. Both of them sat on Hunter Biden’s laptop and refused to admit that the contents contain enough evidence to indict Joe, Hunter, and most of the immediate family.

The  sewer dwellers in the intel community did their part. Hayden pushed for wide-spread spying on US citizens and implied that President Trump should be executed after the FBI tried to accuse Trump of processing nuke secrets during the political theater at Mar-a-Lago.

Clapper lied to Congress about domestic spying and said that Obama’s illegal spying on Trump was “a good thing“,  since he manipulated the intelligence community’s assessment of the Russian “collusion” hoax.

Brennan is a traitorous, bloviating fuckstick. He colluded with British and Estonian spies to undermine the election.

A Feb. 13, 2010 speech Brennan gave at the New York City School of Law was organized by the Islamic Society of North America (ISNA), a group founded by the Muslim Brotherhood terrorist organization, whose members operate within the United States. During the speech, he soft-peddled Islamic jihad as a touchy-feely soul-searching struggle.  Brennan also forced Benghazi survivors to sign non-disclosure agreements, and opined that critics of Obama’s flaccid ‘counter-terrorism’ policies were ‘serving goals of Al Qaeda’ .

More: In a 2008 paper, Brennan called on U.S. officials to “cease public Iran-bashing,” and recommended that the U.S. “tolerate, and even … encourage, greater assimilation of Hezbollah into Lebanon’s political system, a process that is subject to Iranian influence.”  He helped strip language about “radical Islam” and similar terms from government vernacular, choosing instead to refer to “violent extremism.”

In 2014, his CIA illegally spied on the U.S. Senate, breaking into congressional staffers’ emails for material to use to prosecute them and then lied about it.

Brennan squeezed the fake dossier allegations into Obama’s daily briefings and lied about his knowledge of the dossier before Congress.

Now that at least a few liberal media outlets are admitting what we already knew, not one of the intel spooks, Brennan included, will ever admit they lied.