Look at the way they treat you.

The Dem Party keeps you on their plantation while mouthing platitudes about “white supremacy”.  They incite riots by throwing gasoline on the racial fires and you’re all too happy to carry it out; in your own communities. There’s a total (so far) of 570 riots in over 200 locations around the country, and dozens of murders. They have you trained like Pavlov’s Dogs. One ring of the bell and you’re salivating for violence.

They’ve sold you a scam that they really care about you.  The only black lives that matter are ones they use for political gain.  While you slaughter each other by the bushel, (gang-banging is a sport)  the Dems couldn’t care less.  They’re oblivious when black children are murdered in drive-bys and by bullets that pierce the walls of their homes.

Your own BLM syndicate is schizophrenic. ‘Woke’ black activists rant about “Jim Crow” while they push for a return to segregation. BLM founders hate whitey, but they buy homes in affluent white neighborhoods.

Minorities have traditionally flocked to the Dems because of the endless promises of handouts, welfare, and free rides.  You are  “persuadable” sheeple.

Academic Intelligentsia, like the Dem Party, caters to you via the bigotry of low expectations.  “Critical Race Theory” is not a legitimate course of teaching.  It’s just another politically motivated racial wedge to drive between people.

They’ve also convinced you that you’re too helpless and oppressed to acquire an ID and present it at the local polling station.  Just about every official transaction in your adult life requires identification.  Dems have made voting an exception to that, based on your skin color.

Candace Owens sums it up:

TUCKER CARLSON, HOST: Candace, do you have a government-issued ID? And if you do, how did you get it?

CANDACE OWENS: I’m so excited to announce to the world that I was actually able to secure a government-issued ID, because I am smarter than a fifth-grader. And this is such “the bigotry of low expectations.” The Democrats know that … they are saying something absolutely foolish, the idea that Black Americans are wandering around like Neanderthals, going ‘How do we do it’?

This would mean we’ve never been into a hotel room … we can’t rent a car, can’t buy a car. We can’t buy liquor, cigarettes, all the things that require simple form of identification.

That means Black Americans don’t have a bank account. We are running around [going] “How do we do it?” because we can’t Google “DMV near me” and get there and provide basic pieces of [documentation]. It’s so insulting.

And it’s funny that they don’t think people understand what they are doing.

Democrat strategy is so simple: “What do we want to accomplish? Anything that stands in our way, call it racist.” And why do they call it racist? Because the truth here, Tucker, is they perceive Black Americans as stupid and emotional. They view us to be low-information. They want us to be their pawns, so if they call it “racist” that means black Americans will go out and attack that thing that they call racist. 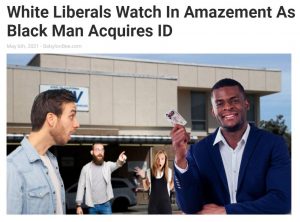 That isn’t far from the truth.  Condescending white liberals think you’re incapable of taking care of yourself; you need a nanny.

Some of the worst racists in America are your own political comrades. They fling racial slurs at blacks and Hispanics who refuse to be slaves to victimology and have the courage to break away from the Dem Overlords.

Just be good little sycophants. Continue to support the politicians who treat you like shit.