All the incitement and rhetoric by the biggest hate group in America results in another attack on a Republican. 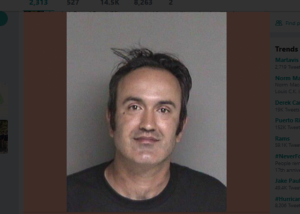 Sheriff’s deputies arrested 35-year-old Farzad Fazeli Sunday in the Oakland, California, suburb of Castro Valley after he allegedly attacked a Republican congressional candidate while making “disparaging” and “profanity-laced” remarks about President Donald Trump and the Republican Party.
Rudy Peters, the Republican nominee for California’s heavily Democratic 15th Congressional District, set up a booth at this weekend’s Castro Valley Fall Festival. According to an Alameda County Sheriff’s Office press release published Tuesday, Fazeli “approached” Peters “in an aggressive manner and made disparaging remarks” at around 3:45 that afternoon. A later report by a local CBS affiliate indicates witnesses said Fazeli’s rant was “profanity-laced.”

Fazeli then, according to the sheriff’s office, produced an illegal switchblade and tried to stab Peters. The knife failed to open and, after a struggle with the candidate, Fazeli fled, only to be arrested shortly thereafter on charges of “felony assault, criminal threats, brandishing a weapon and possession of a switchblade knife.”

“Deputies happened to be there for the festival,” an Alameda County Sheriff’s representative told Breitbart News. “As soon as the guy fled, we learned about the crime, and we pursued him, and we caught him a short time later. He had the knife on his person.”

……Neither the sheriff’s office nor either of the campaigns involved commented on the assault for over two days, and no major media reports appeared in that time. The Alameda County Sheriff’s representative told Breitbart News the two-day delay in reporting on an armed assault on a congressional candidate was unrelated to any political aspect of the case. “We are non-political,” he said.

Alameda County, home to Oakland and Berkeley, is one of the most liberal counties in the United States and one of very first so-called “sanctuary” jurisdictions in the United States. Oakland Mayor Libby Schaaf has recently come under fire for taking the policy of non-cooperation with federal immigration enforcement actions to the next level, actively undermining U.S. Immigration and Customs Enforcement (ICE) operations by releasing the confidential information about impending raids given to her by virtue of her office.

In February 2017, Fazeli wrote a Facebook post blaming Trump for the Parkland high school shooting. He wrote, “When you murder 17 children of god, and your Capo Don Trump (white militia spokesman unofficial) still bows down to the NRA and stays silent. Meanwhile street gangs have a code to clean house if a member murders rapes etc. who is the lesser of two evils
code of conduct politicians the street code is to self regulate since our government won’t govern and punish untouchables. In the street everyone is touchable if faulty (checks and balances).”

……Fazeli has previous convictions for burglary and battery, Alameda County court records show. He was charged with felony burglary in 2000, but the charge was dropped to a misdemeanor as part of a plea deal. He was sentenced in 2001 to 40 days in county jail. In 2004, Fazeli was again convicted of misdemeanor burglary. He was sentenced to 45 days in jail and three years of probation, which ended in 2007. Details of those cases were not immediately available.

Fazeli was charged with misdemeanor sexual battery and misdemeanor battery in 2014, court records show. Further details about the 2014 case were also not immediately available. Later that year, Fazeli pleaded no contest to battery and not guilty to sexual battery. The sexual battery was dropped as part of the plea agreement. He was sentenced to 15 days of weekend jail and three years of probation, which ended in 2017.

He hates women. He hates the NRA. He’s Persian (Iranian).  He blames natural disasters on Republican voters. He has violent fantasies against President Trump.  He decided to take matters into his own hands and attempted to stab a GOP candidate. And he’s a creep.  The perfect Dem.

This is just the latest.

G. Brooks Jennings was a GOP committeeman from Pennsylvania who lived next door to Clayton Carter, a Dem wackjob who had a yard full of anti-Trump signs.  Carter murdered Jennings right in front of his wife.

The Dems have been at this for a while.

They embrace ‘occupy’ thugs, ‘black lives matter‘ criminals, and ‘Antifa‘ malfeasants.  The Dems and the leftwing media own this violence. They foster it, praise it, and support it.

They spew misogynist hatred toward female conservatives, fling racial slurs at black Republicans and Hispanic Republicans for refusing to be exploited, and leaving the Dem plantation.  They especially hate white Republican/Tea Party members and hurl psychotic death threats at them for good measure.

They hate cops, the military, (remember when Dick Durbin stood on the floor of the US Senate and called American troops ‘Nazis’?), and the American flag.

Dems have morphed into the fascists they warned us about.