UPDATE: Antifa thugs showed up and stabbed people. It’s time to fight back and take more of the Antifa/BLM criminals out of the gene pool. They’re not peaceful, they’re violent militant punks. They get away with it because the Dem mayors and governors who control the cities where they riot, refuse to deal with them. The Feds haven’t done enough to remove them from the streets. 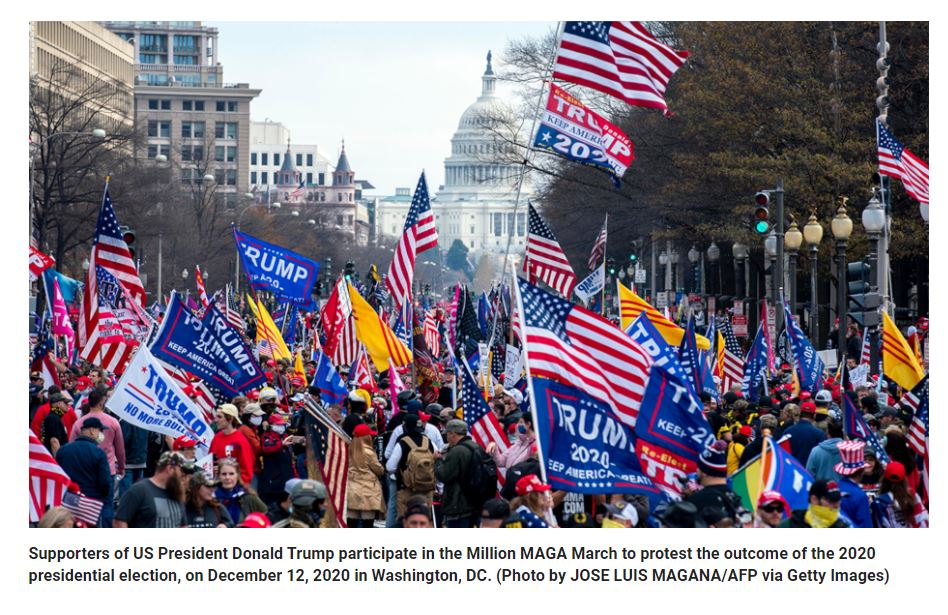 Backers of President Trump descended on Washington, D.C. Saturday in another sign of support for the president, who has come up short in his efforts to overturn the results of the 2020 presidential election.

Supporters with Trump flags and hats gathered at Freedom Plaza near the White House chanting “Four More Years” and “Stop the Steal” to urge Trump to keep on fighting to stay in the White House. Organizers of the Women for America First rally were expecting 15,000 participants for the rally and march to the Supreme Court.
One speaker at the rally was retired Gen. Michael Flynn, Trump’s former national security adviser, who told the crowd he was confident Trump would remain in office.

“When people ask me…on a scale of one to 10, who’s going to be the next president of the United States? I say: 10, Donald J. Trump … without hesitation.”

……”The fraud that is being perpetrated on the United States of America through this previous election is outrageous,” Flynn told the rally crowd near the White House. “It’s outrageous. We will not accept it.”

Trump appeared to be pleasantly surprised by another show of support in the Democratic stronghold of D.C.

“Wow! Thousands of people forming in Washington (D.C.) for Stop the Steal,” Trump tweeted Saturday morning. “Didn’t know about this, but I’ll be seeing them! #MAGA”

……Trump aide Dan Scavino tweeted a picture from the sky above with a message to the crowd. “Thank you, Patriots.”

……The “March for Trump” demonstration organized by the Women for America First kicked off at noon. Speakers included “My Pillow” guy Mike Lindell and former Trump aides Sebastian Gorka, Boris Epshteyn and Katrina Pearson, who encouraged supporters to keep up the fight to overturn the election results.

……Trump supporters made clear they will continue to fight back regardless of the media and court rulings and will not accept Biden as president.

“In 2016, they had this thing called the resistance, do you remember that?” Pearson said of the left’s movement against Trump. “You haven’t seen a resistance until patriots show up to defend the republic.”

A second pro-Trump rally was set for the Sylvan Theater on the National Mall, where organizers planned for 500 people, according to their national park permit.

The Dems engaged in some of the worst voter fraud and subversion in U.S. history.

We will never accept the illegitimate election of Biden, nor will we stop fighting for justice. We will demand that the criminals who engaged in widespread voter fraud and ballot tampering be held accountable.

Ballots have been stolen, thrown away, mysteriously vanished, and materialized, and there have been more ballots than legally registered voters. There have also been ballots appearing with the names and addresses of dead people and residents who moved out of their former state before the election.  Last but not least, there’s the usual fake names and addresses being used.

If Biden manages to slither into the White House, he should expect a 4-year fight.

If he makes it that long.