A victory for voter ID:

In 2018, Republicans in North Carolina’s state legislature overrode a veto by Democrat Gov. Roy Cooper that amended the state’s constitution to declare that “voters offering to vote in person shall present photographic identification.”

Republicans in the state legislature sought to intervene in the case, arguing that the state’s interests were not being properly represented, as the governor and attorney general have both opposed voter ID laws.

In an 8-1 decision, written by Justice Neil Gorsuch, SCOTUS held that “North Carolina’s legislative leaders are entitled to intervene in this litigation.” Justice Sonia Sotomayor dissented in the case.

“The legislative leaders seek to give voice to a different perspective. Their “primary objective” is not clarifying which law applies. They are not burdened by misgivings about the law’s wisdom. If allowed to intervene, the legislative leaders say, they will focus on defending the law vigorously on the merits without an eye to crosscutting administrative concerns. And, they add, the differences between their interest and the Board’s in this case demonstrate why state law empowers them to participate in litigation over the validity of state legislation — alive as it is to the possibility that different branches of government may seek to vindicate different and valuable state interests. Perhaps recognizing all this, the Fourth Circuit itself allowed the legislative leaders to intervene in the appeal from the District Court’s preliminary injunction ruling. The same result should follow here.

…..Through the General Assembly, the people of North Carolina have authorized the leaders of their legislature to defend duly enacted state statutes against constitutional challenge. Ordinarily, a federal court must respect that kind of sovereign choice, not assemble presumptions against it. Having satisfied the terms of Federal Rule of Civil Procedure 24(a)(2), North Carolina’s legislative leaders are entitled to intervene in this litigation. The judgment of the Court of Appeals for the Fourth Circuit is reversed.”

“Today is a big win for democratic accountability in the rule of law,” Ambassador Ken Blackwell, chairman of the Center for Election Integrity at the America First Policy Institute, exclusively told Breitbart News.

The Dem Party is trying to replace the American citizen electorate with more obedient voters from the Third World. In order to gain power, they plan to change the fabric and demographic of the country. Even if they have to destroy it.

Years ago, Dems actually wanted the immigration laws enforced until they realized they could use illegals for political tools.

A victory for the 2nd Amendment:

The Supreme Court of the United States (SCOTUS) ruled 6-3 on June 23 that New York’s proper cause requirement for concealed carry permit issuance is unconstitutional.

New York State Rifle and Pistol Association  (NYSRPA) v. Bruen centered on denials for permits under New York’s concealed carry permitting law. The NYSRPA filed suit claiming that one of its members was eligible for a permit but was denied because of New York’s requirement that concealed carry applicants prove why they need to carry a gun.

The case ultimately dealt with the scope of the Second Amendment — whether the right to keep and bear arms applies only in the home or outside the home as well.

……The immediate impact of the June 23 ruling is that New York’s proper cause requirement is struck down. What is yet to be seen is how this decision will impact other states–like California and New Jersey, both of which have concealed carry issuance guidelines similar to New York’s proper cause requirement–and whether the success of NYSRPA .v Bruen leads to suits against those states as well. 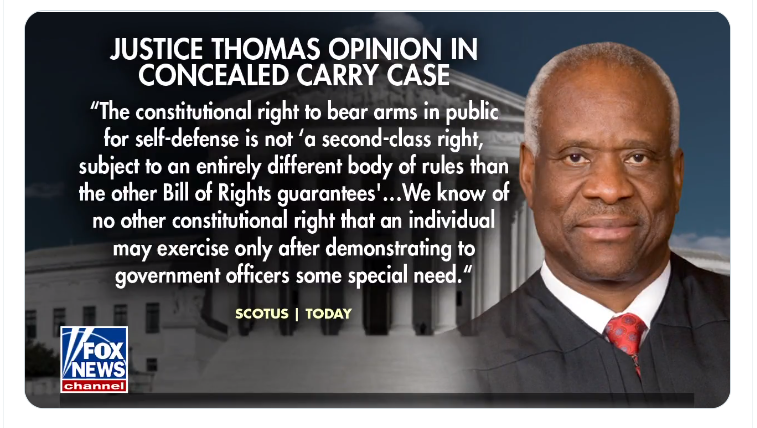 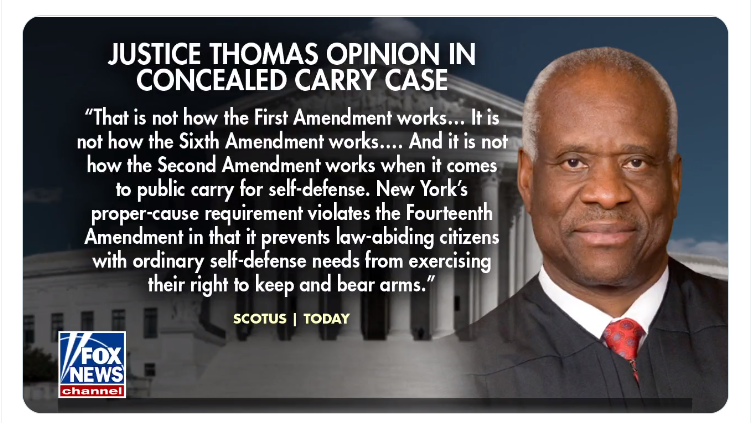 Right on cue, Hollywood, the lib media, and Prog politicians freaked out.

The real target isn’t guns, it’s their visceral dislike for the Bill of Rights that guarantees civil and individual liberties to people they hate.  It’s about grabbing power and forcing the country to bend to their agenda.

According to the Left’s set of rules—celebrities and politicians—some are more deserving of the Second Amendment than others, and they certainly know how to selectively exploit and politicize gun-related crimes. The same DemProgs who push for ‘gun control’ are surrounded by armed security.

In 1981, author Chip Elliott wrote a pointed response to the anti-gun demagogues.  He came full circle from being a member of the anti-gun camp, to a gun rights advocate after he got cold-cocked by reality.  Read the whole thing. It’s a classic essay.

New York City and Chicago have some of the nation’s highest gun-related crime rates, in spite of passing some of the strictest gun laws in the country.

The leftie nutburgers  like to spew their bullshit over ‘gun control’, but seem oblivious to the daily carnage in Dem-controlled ganglands like Chicago, where people have to step over a fucking pile of bodies just to walk down the street. The homicide rate in black neighborhoods is astronomical, but the only black lives that matter are the ones Al Sharpton can use for exploitation and political points.

When rabid leftwingnut James Hodgekinson showed up at a D.C. baseball game and shot Republicans, libturds took to social media and praised his atrocity.

The families of the victims of Obama’s Fast and Furious gunrunning operation never got their attention.

Bottom line: Armed criminals deliberately choose soft, unarmed targets. They couldn’t give one shit less about the idea of restrictive gun laws.  Every law-abiding American citizen has the right to defend themselves.

I own firearms. I support the United States Constitution.  I support the right to defend myself, my family, and my home from thugs who would rather steal than earn like the rest of working Americans.

I will not forfeit my freedom or my life for the sake of ‘gun control’.  When seconds count, the cops are only minutes away and I don’t have the Dem politicians security system of body guards.

I will not be disarmed.

On Friday, the United States Supreme Court overturned Roe v. Wade and the constitutional right to an abortion.

The end of Roe v. Wade came with the Court’s Friday decision in the Dobbs v Jackson Women’s Health Organization case to allow Mississippi to implement a 15-week abortion ban. In order to uphold the ban, the Supreme Court overturned the landmark 1973 Roe v. Wade decision.

Now individual states have the power to allow, limit, or ban the practice altogether.

This decision is based on the Bill of Rights:

Amendment IX:
The enumeration in the Constitution, of certain rights, shall not be construed to deny or disparage others retained by the people.

Amendment X
The powers not delegated to the United States by the Constitution, nor prohibited by it to the states, are reserved to the states respectively, or to the people. 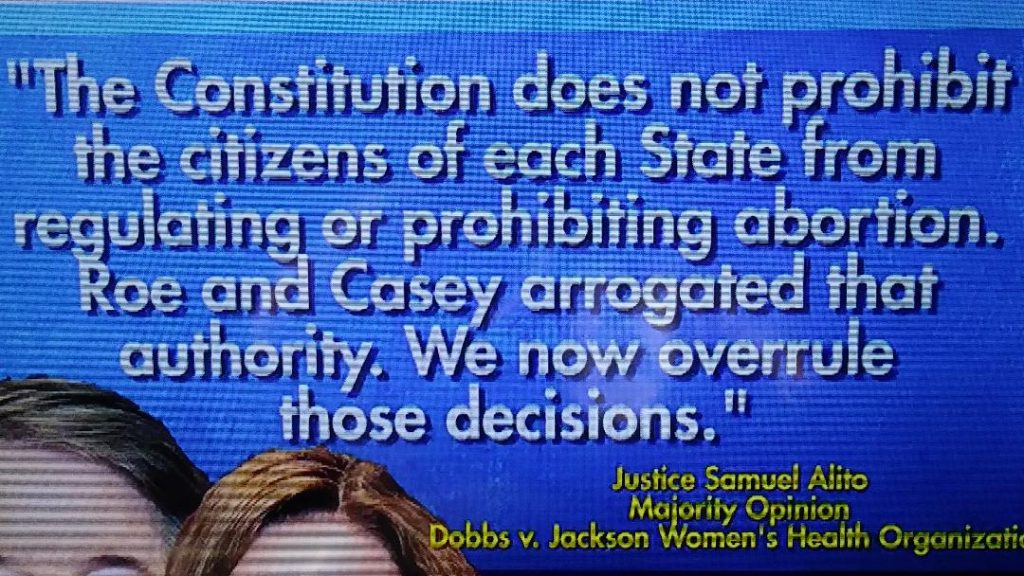 ……What the Supreme Court does not do, what it cannot do and should never do is make laws and it should never do that because a court making laws would be, by definition, anti-democratic. None of the nine Supreme Court justices has been elected by anyone. All of them have lifetime appointments. If you cared about democracy and wanted democracy to continue, you would demand that all laws in the United States be passed by elected legislatures. Again, no matter how you feel about abortion or any other specific issue. In a democracy, voters have the final word on how they are governed. That’s what democracy is.

Now, after nearly half a century, voters have had their rights restored on the question of abortion. If they like abortion, they can vote to legalize abortion. If they don’t like abortion, they can vote to ban abortion. That’s not shocking. That is how our system is supposed to work, not being a monarchy and all. So, what’s the argument against this? Well, there isn’t one, really and we know that for certain from the dissent in today’s Supreme Court ruling.

……Today, (Justin) Trudeau wrote this: “The news coming out of the United States is horrific. No government, politician or man should tell a woman what she can or cannot do with her body.” Suddenly, women are the only ones who get pregnant, you’ll notice. Canada is a country, by the way, under the leadership of Justin Trudeau, that prevented unvaccinated citizens from traveling within their own country. They had mandatory vaccinations.

……This particular ruling dramatically reduces the power of unelected judges to dictate the details of the lives of millions of Americans and returns that power to voters. Voters get to decide how they want to live. That’s an extreme ideology that upsets the balance of power somehow? We thought that was the whole premise of our system.

We thought that was democracy and yet the very people who’ve been lecturing us for years about democracy — “it’s the end of democracy” — are horrified by the return of democracy. They’re telling us the legitimacy of our institutions is at risk and yet they cannot allow voters to have a say in how they live. What does that tell you? It tells you they care about power, not popular support.

They’re afraid to put their ideas to the test of a vote and that’s why the Justice Department — which no longer dispenses justice, instead it works on behalf of the Democratic Party — allowed thugs to gather outside the homes of Supreme Court justices for the last several weeks in violation of federal law in an effort to intimidate them into not doing what they did today, and that’s why today you saw several elected members of Congress call for insurrection.

That would include Sandy Cortez of Westchester. That would include, as always, Maxine Waters of Los Angeles. This is not the first riot she’s called for. She once again threatened violence against Supreme Court justices because they came down with an opinion she doesn’t agree with and then she promised to defy the court’s ruling. How’s this for defending our institutions?

When the SCOTUS overstepped its bounds to affirm the unconstitutional ObamaCare and the gay marriage ruling that contorted the 14th Amendment to suit the justification, the Left was elated about the illegitimate legislating from the bench.

I’m pro-choice, and I have no problem with the decision.  It will simply put the issue back where it belongs; the voters in each state will have a say in how abortion would be regulated.  It will not outlaw abortions in the states where it’s legal. Predictably, the leftwingnuts are going ape shit and are ratcheting up the violence. 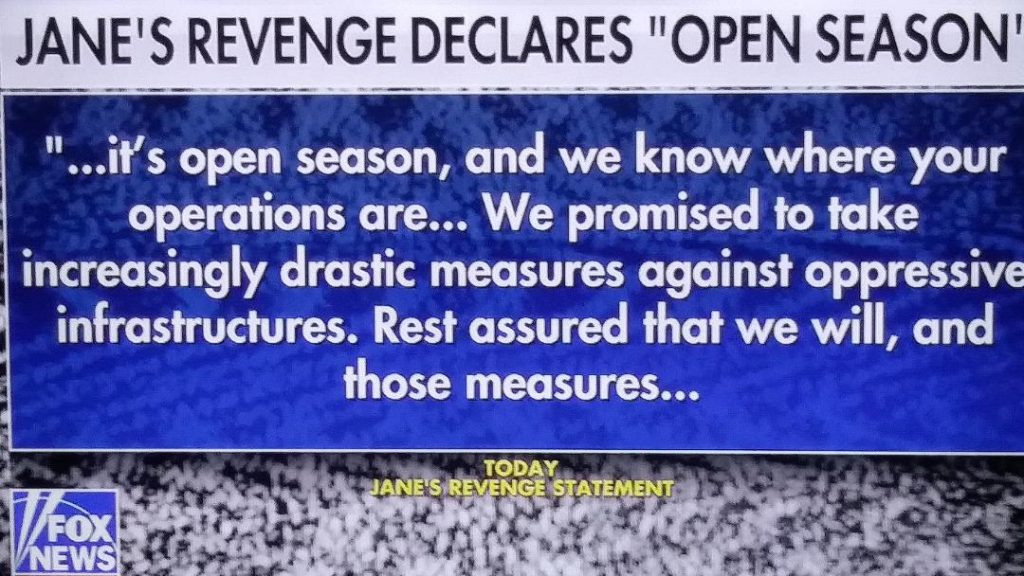 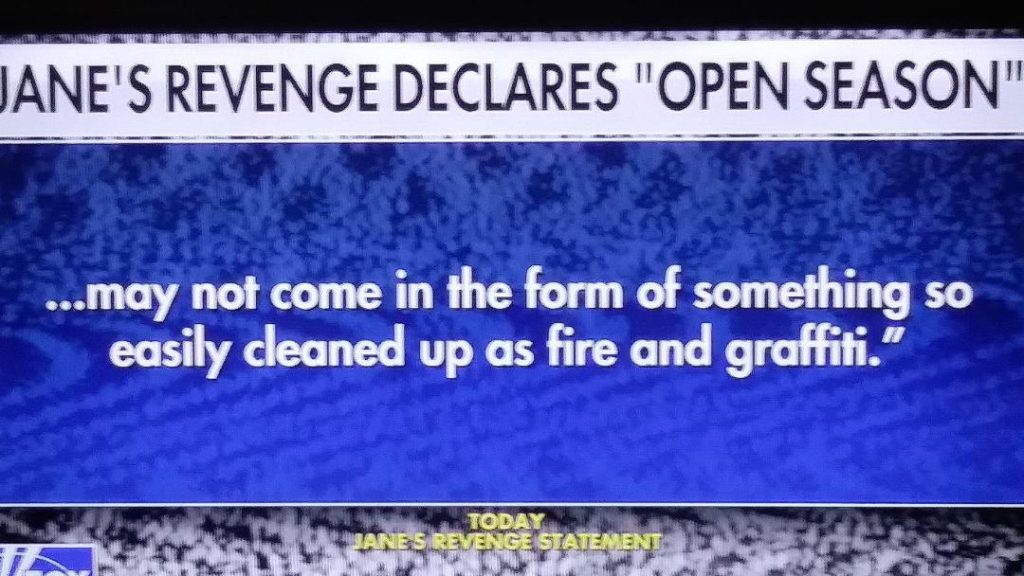 “Jane’s Revenge” is a militant terrorist group similar to Antifa.

Rep. Maxine Waters, D-Calif., pledged to defy and protest the Supreme Court following its decision Friday overturning Roe v. Wade.  “You ain’t seen nothing yet,” Waters said from the steps of the court. “Women are going to control their bodies no matter how they try and stop us. The hell with the Supreme Court.”

Sandy Cortez shouted “illegitimate” and “into the streets”.  Sunsara Taylor of the Revolutionary Communist Party, USA, was seen holding a bullhorn receiver for Ocasio-Cortez and directing the crowd’s chants.

The unhinged Hollywood crowd is busy railing about the ‘patriarchy’ and ‘tyranny’.  The most hilarious one came from Jeffrey Wright, who wailed about the ‘three justices appointed by a certified moral degenerate’.  This is coming from a denizen of one of the most depraved, perverted, immoral communities on the planet. Hollywood is steeped in sex trafficking, rapists, and pedophiles.

After the draft decision was leaked, the Dems sent a hit man to assassinate SCOTUS judge Kavanaugh.

Get ready for a long, hot summer of riots, mayhem, and bloody violence on the Dems’ behalf.