Just so you know, the leftwing Dems, Hollywood, the media, and universities in the United States, are not pleased with you. Especially those who dare to question the socialist narrative or simply don’t get with the program.

We’re just a bunch of dullards who don’t understand kowtowing, inept foreign policy, unemployment, the deplorable state of the U.S. economy, or the out of control spending by a socialist kleptocracy.

Newsweek has graced its 16 January 2012 online cover with an article written by Andrew Sullivan, cockholster extraordinaire: 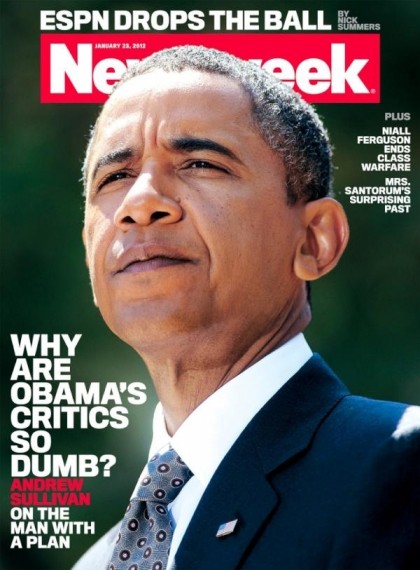 Just what we need; more pompous asslownery from a leftwing rag informing the ignorant masses that we just don’t know what’s good for us.

You may remember Andy’s abnormal preoccupation with Sarah Palin’s son. He accused her daughter Bristol of being the actual mother.
His screeching tirades have even drawn criticism from his own staff.

Newsweek has sunk to the bottom of the cesspool along with Time and the New York Times.   That’s the kind of cover you’d expect to see on The Onion.

In 2003, Newsweek’s worldwide circulation was more than 4 million, including 2.7 million in the U.S; by 2010 it was down to 1.5 million (with newsstand sales declining to just over 40 thousand copies per week). Newsflash, Newsweek: You and your staff are a fucking joke. No one reads you anymore or takes your horseshit seriously. Folding the rag to hasten your slow, agonizing death, would be a prudent, sensible move.

The Demleft divides us into two classes of people: Those who believe in Obamessiah and the Marxist agenda he pushes, and the unwashed heathens who refuse to buy his shit sandwich.

The liberal effete in the White House think you’re stupid.  The academic intelligentsia eggheads at Harvard came up with a study that concludes: “Fourth of July celebrations in the United States shape the nation’s political landscape by forming beliefs and increasing participation, primarily in favor of the Republican Party.” In other words, celebrating our Independence Day makes you brainwashed.

Washed up comedians who have taken to the political show circuit, insist that like a dog, you understand inflection and tone of voice, but don’t have the ability to grasp the issues. Those who have the audacity to realize that Islam is a violent, brutal, political ideology are “islamophobic”.  And by the way, America “caused” 9/11.

The leftwing media elite thinks you’re ungovernable, ill-informed, that there’s too much democracy for your own good,  and if you reside in one of the ‘flyover states’, you’ve got ‘low sloping foreheads’.

One wackjob political cartoonist has called for violence against the Right because  “…the U.S. is going to end soon. There’s going to be an intense, violent, probably haphazard struggle for control. It’s going to come down to us versus them.”

Tea Party patriots and conservatives get spit-flecked hatred, accused of ‘racism‘, and receive death threats as a matter of course.  Our opposition to Dem hubris causes libtards to break out in epileptic fits of “terrorists“, “baby kidnappers“, and peons  “undeserving of free speech”.

Leftist groups, artists, college students, and politicians reserve a special hatred for the military. Some of them even like to crash military funerals and spew anti-war sentiment at the families of the fallen.

The Left has latched on to one of the biggest dumbasses on the planet, not to mention one of the most corrupt politicians, ever.

This arrogant, immature Marxist moron has brought socialist destruction of our free-market economy, fucked up our foreign policy and national security, embraced the “Occupy” thugs, disrespected the military and their families, and helped create the ‘Fast and Furious’ gunrunning operation. He takes perpetual vacations to the golf course and Hawaii at taxpayer expense, lies incessantly, and kowtows to Islamic scumbags, being such a Dhimmi to the point where he managed to make Bin Laden’s demise look anti-climactic. He ripped off taxpayers with his eco scams, his union pals make threats and commit violent crimes, and last but not least, he’s a Stuttering Clusterfuck of a Miserable Failure.

But Obama’s critics are ‘so dumb’.

1 thought on “Dear America: What the Left Thinks of You (Just Look at the Latest Newsweek Cover)”