News out of Vermont paints a bleak picture of just how harmful the collective psychosis of COVID hysteria is, a phenomenon that seems isolated to heavily Democrat areas.

For years, fear-mongering from the government and national media has pushed people to detach themselves from reality when it comes to assessing risk profiles regarding the coronavirus. That’s now playing out in the form of completely asymptomatic individuals rushing to jam up emergency rooms in Vermont. Though, as we’ll see, this is hardly limited to the Green Mountain State. 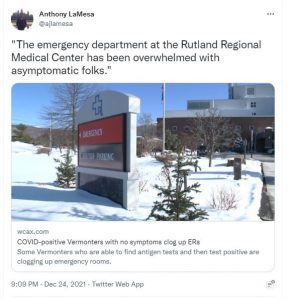 Asymptomatic. In other words, covidiots are so engulfed in hypochondria, they’re rushing to the hospital for treatment of imaginary aliments.

This isn’t the overwhelming of hospitals we were promised by the left. Rather, it’s the exact opposite, with people who aren’t even sick showing up to take resources away because they’ve been convinced that COVID is still highly deadly for 45-year-olds in good health. Even older people who are asymptomatic should not be going to the ER. Rather, they should live their life. Unless they actually get sick, what is there to treat?

Yet, the cynical move by Democrats to cause so much fear around COVID has pushed a large segment of the population into what can only be called some form of mental illness. Get a load of these responses I chronicled a few days ago and tell me we don’t have a problem on our hands. 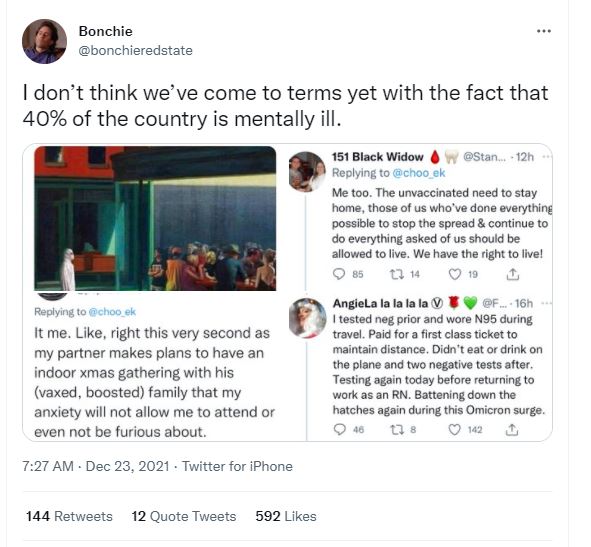 This stuff needs to stop, and it’s not going to stop until Democrats from the president on down start telling the truth about the risks of COVID for different demographics. Take another look at that picture in the Post’s article. Many of those people look to be under 50, and none of them appear to be suffering from a debilitating illness. Yet, they are acting as if someone is handing out solid gold bars. It’s insanity and completely unnecessary.

You think that’s crazy? Get a load of this: 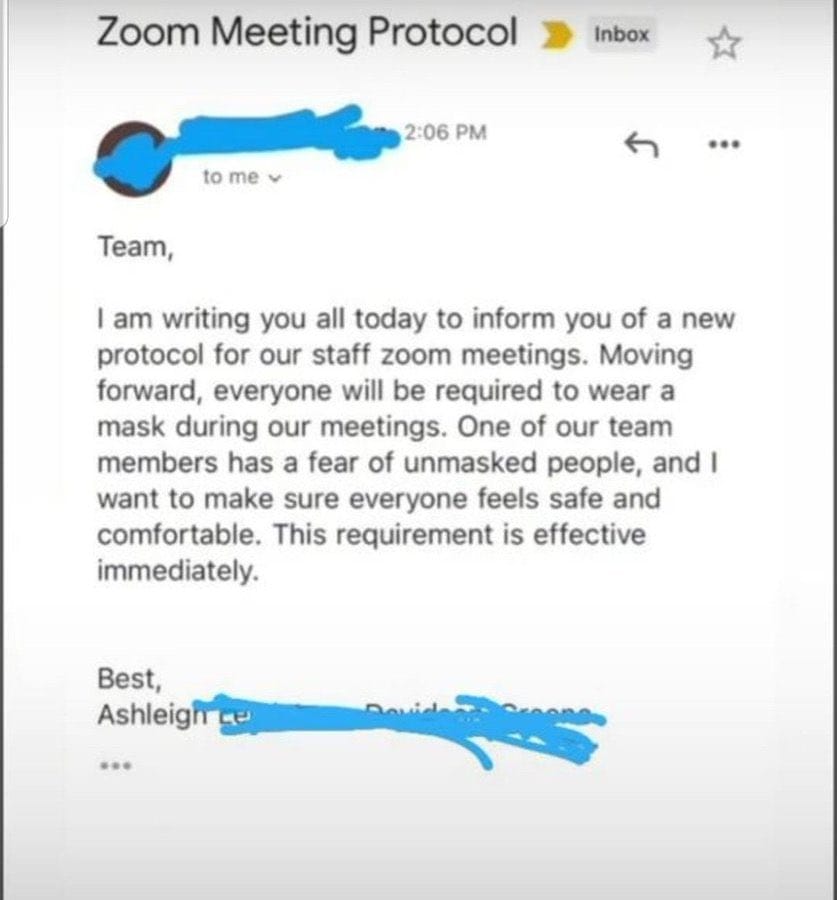 This is how one of the recipients responded: 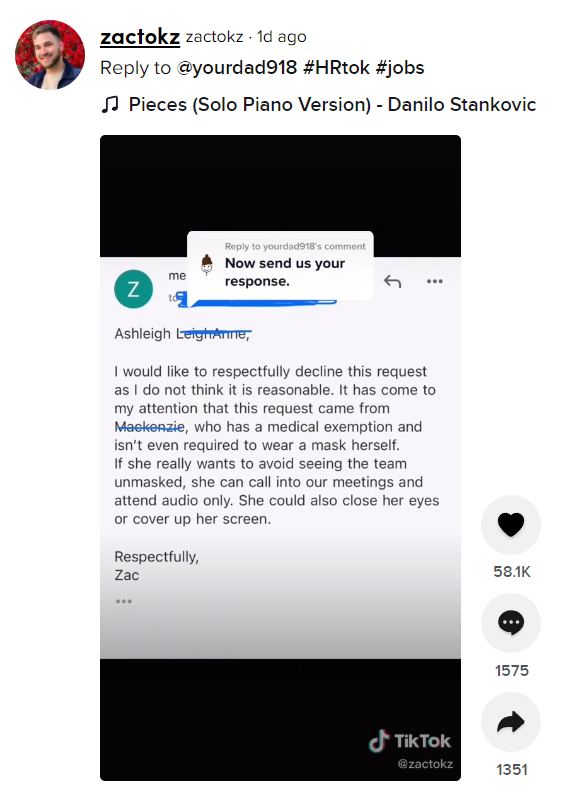 This is the idiot who sent the message: 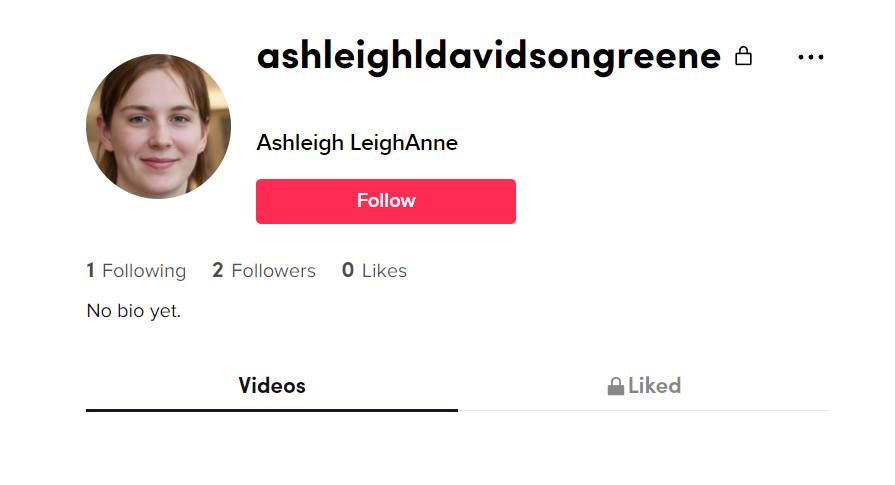 It’s not about public health and safety; it’s about power and control.

Covid Karens and out of control authorities:

Biden’s “mandate” exempts the elites in Congress from the jab.

A California man in cardiac arrest dies after paranoid paramedics refuse to enter the building to render treatment because of “some Covid 19 law”.  The assholes should be fired and charged with depraved indifference murder.

As if one suffocation device wasn’t enough, Dr. Scott Segal, chair of anesthesiology at Wake Forest Baptist Health in Winston-Salem, North Carolina, says you should wear at least four masks.

The UK and Australia have gone full fascist over covid, using it as an opportunity to abolish civil liberties.

Karma: Rabid pro-vax cardiologist who said he ‘won’t cry at the funeral of unvaxed people’, dies in his sleep two weeks after his third jab.

After living like a hermit for 18 months, an idiot doctor got covid anyway.

A compilation of mask-wearing covidiots and their unhinged behavior, HERE.

Big Pharma is making billions off of the covid jabs.

The California Air National Guard was on standby for a “possible domestic mission” during the start of the covid panic.

Covidiot Robert Kovner, 62, who lives in Sebring, Florida, posted a threat on Facebook to shoot anyone he saw not wearing a mask.

California health inspector does happy dance after telling business owner to shut down over “covid violations”. Turns out she was wrong.

The attorney for a mom whose son committed suicide during the draconian lockdown received vulgar harassing voicemails from a retarded incel.

The mask nazis goosestep on civil liberties:  British supermarket Morrisons called the police on a disabled man who was medically exempt from wearing a face mask after attempting to make him wear a yellow sticker.

Scientists and physicians who knew the virus was a politicized, fear-based narrative were censored from social media.

The government will never forget how easy it was to take control of your life; to control every event, restaurant, sports facility, classroom, church, and even if you are allowed to leave your house.

Remember that the next time the government manufactures a crisis.