Joe Biden’s newly formed “Disinformation Governance Board,” which many see as an Orwellian “Ministry of Truth,” will be led by his creepy thought-cop-in-chief Nina Jankowicz who is allegedly in favor of forced lockdowns and alarmingly disses Americans who value their freedoms.

“I hope all of those who want to get out of lockdown and ‘get their freedom back,’ who doubted Russia’s intentions, or thought the Mueller investigation was a ‘hoax’ now understand the seriousness of cyber attacks and information operations,” she wrote in July of 2020. Jankowicz is a prolific tweeter.

This is the same woman who has a penchant for making monstrously cringe-worthy propaganda videos where she sings about polarizing political topics. Specifically, mocking conservative politics while also accusing them of potential violence, etc.

The new disinformation czar is evidently a Harry Potter fan and is the author of “How To Lose the Information War: Russia, Fake News, and the Future of Conflict.” She ironically hails from the Wilson Center think tank and previously called the laptop of President Joe Biden’s son Hunter a “Trump campaign product.”

She’s very vocal about her extreme leftist views and raised “concern” about Trump supporters using voter intimidation tactics ahead of the 2020 election.

“I think there’s a general concerned about Trump supporters potentially showing up armed to the polls,” Jankowicz said in the following clip……

Jankowicz also thought Americans were a little too ‘free-spirited’ in the face of lockdowns and called for force.

“So, force away! Lock us down,” she tweeted.

Tucker Carlson first dug deeply into Jankowicz and her heavy-handed tendencies toward censorship. He played a video of her singing karaoke, belting out suppressive propaganda that would make Stalin blush. The Fox News host called her an “illiterate fascist.”

She’s got all the right credentials for the job of Truth Meister:

The so-called “Russian disinformation expert” has had her works published by The New York Times, The Washington Post, and The Atlantic, among others. She managed democracy assistance programs for Russia and Belarus at the National Democratic Institute for International Affairs. She earned her BA degree from Bryn Mawr College and received her Master’s degree in Russian, Eurasian, and East European Studies from Georgetown University’s School of Foreign Service.

……Joe Biden’s partisan political enemies are now officially enemies of the state. How is this happening in America? Good question, but it is happening and Biden’s new thought-cop-in-chief has been revealed. She’s a 33-year-old, highly self-confident young woman called Nina Jankowicz.

Jankowicz comes from a place called the Wilson Center. That’s a nonprofit named for America’s other mentally incapacitated warmonger bigot president. Ironically, because everything is irony, the Wilson Center is itself a major producer of U.S. disinformation, but of the neocon variety, and for that reason is heavily funded by the Biden administration. Jankowicz is also, because everything is connected, a former adviser to the neoliberal government of Ukraine, the government we’re shipping tens of billions of tax dollars to as our own economy swirls down the drain. So, you really can’t make any of this up. It’s too grotesque. Would you believe a novel with this plot? No, you wouldn’t, but it’s happening and that’s the bad news.

The good news is everyone involved in Joe Biden’s new Ministry of Information is a buffoon. They may be evil, but they’re also ridiculous. Nina Jankowicz is the most ridiculous of all. So you read about her appointment in The Washington Post this morning and immediately thought of the NKVD because why wouldn’t you? Yet even the NKVD, even at the height of Stalin’s purges, never did karaoke. They were too dignified for that, but Nina Jankowicz happily does.

……As she wrote recently, “The free speech versus censorship framing is a false dichotomy.” First of all, here’s a pro-tip. Anyone who uses the term “false dichotomy” is a moron. That is one of countless academic phrases designed to prevent thought rather than facilitate it. False dichotomy means they’re never going to have to explain why their position is correct or yours is wrong. That is dismissed with, “Oh, it’s a false dichotomy.”

Again, that’s an NPR phrase used by low-IQ people who for some reason want our country, all of a sudden. False dichotomy. Here’s what’s not false at all. Government censorship is banned by the First Amendment, the First Amendment to the Bill of Rights. This whole country is predicated on that, but according to Joe Biden’s new minister of truth, the First Amendment no longer applies in this country because Russia and systemic racism.

……NewsGuard is currently preparing a blacklist of sites that contradict the national security state’s talking points on Ukraine and Russia. So this week, NewsGuard wrote a threatening email to the news site Grayzone, informing The Grayzone that they’re spreading “disinformation” because they’re not reading a script. So, here’s how the editor of The Grayzone, Max Blumenthal, responded. 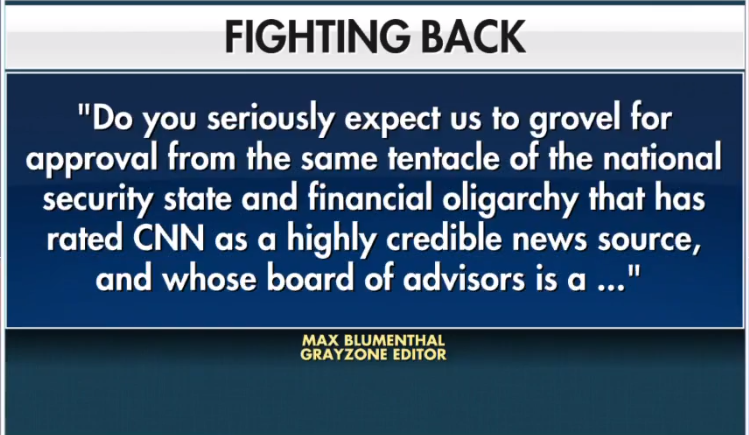 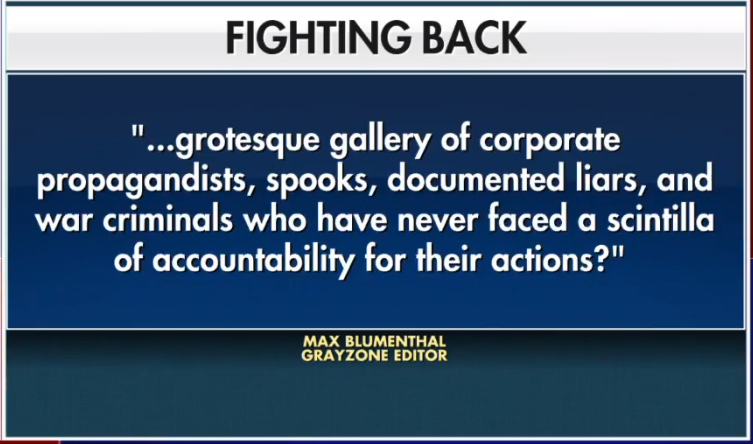 ……Is it true? Yeah. Every word of it. So, when Joe Biden’s censors come, that’s the way you respond. “Hey, pal, up yours. You want some disinformation? Here you go.” You are a free person in a free country, and no law enforcement agency can ever tell you what to think or say. Period.

The Department of Homeland Security has announced that American citizens who challenge authoritarian covid measures and question the integrity of elections are now “domestic terrorists”. Biden’s FBI wants you to turn in your “extremist” relatives and friends.

In 2011, B. Hussein Obama launched an “Attack Watch” department to supplement his Ministry of Truth, which was created to counteract “unfavorable stories”.  His media tools at MSNBC  were all too glad to oblige. One notable event took place during an MSNBC ‘Morning Joe’ broadcast, which featured a discussion of the White House targeting Fox News. An email arrived from the White House on the air to ‘correct them’ about an exchange between former WH spokesperson Robert Gibbs and Jake Tapper. One of the commentators, Mika Brezinsky actually made the ‘correction’.

There are some powerful free speech alternatives to social media sites owned by left-wing overlords.  One of them is GAB. They are gaining popularity with millions of members who are fed up with the censorship of Facebook and Twitter. The Left is not pleased. Big Tech is doing everything it can to censor speech it doesn’t like.

Facebook created a process to monitor the offline behavior of its users to determine if they should be categorized as a “Hate Agent.”

The real danger to democracy is the hostile leftwing media, corrupt Dems, and their weaponized government agencies that target American citizens at their bidding.

Jankowicz is a sewer dwelling Proglodyte with serious mental issues. And of course, she’s a fan of leftie doxxer Taylor Lorenz.

Watch the cringe-inducing videos at the Tucker Carlson link and see for yourself; if your can stomach can take it.